The business was formed as a limited partnership between three siblings and a friend, Cynthia, Stuart, and Rob Chan, along with Jeff Burns, respectively. The Chans are somewhat knowledgeable about running a business since their parents have operated a restaurant for years, and Stuart Chan continues to manage the restaurant. The three siblings are the principals in the business, while Jeff Burns is primarily a partner for financial purposes only. Cynthia, having the most free time, has spent the most time working on the business opening.

Don't use plagiarized sources. Get your custom essay on
“ Cafe Latte ”
Get custom paper
NEW! smart matching with writer

Stuart has procured the equipment for the bar, with Rob’s help. Stuart has become angry at Cynthia for not spending enough time in preparations, and feels that she and Rob are not doing their fair share of work. Stuart wants to buy out Cynthia’s share, but later just apologizes for his outburst. In order to avoid further conflicts, a work schedule was devised that permits Cynthia and Stuart to work schedules that do not overlap, and Rob will manage the operation.

Introduction This case study is following the decision case model.

Case studies are and important part of the study of organizational behavior. We can dissect the various components of attitudes, behaviors, consequences, etc. , using a fictional setting and cast of characters. We can subsequently collaborate to develop objective assessments of the situation presented, and model possible decisions that we might make as managers. In the case of the Cafe Latte case study, we are provided with one decision possibility but we are also free to propose alternative decisions, along with the rationale.

Stuart has some qualities of a team leader (commitment, hardworking etc), but lacks some important ones. He failed to appreciate others contributions and failed to do psychological empowerment. Also as a leader he was not distributing the roles and responsibilities evenly. Unfortunately, he was getting more work from two jobs he was handling. Instead of motivating others he was making negative remarks frequently. There could be some ego problems and sibling rivalry too. Cynthia was unhappy at the end, but she was not ready or courageous to talk to Stuart about the problems.

Instead she wrote a list and handed-over that to Stuart. Stuart was intelligent enough to understand the situation and the consequences. But he has some false pride and he was not even ready give a direct apology to Cynthia. It took him two days to write an apology. Also he has to leave the apology in Cynthia’s car, which made its less personal and sincere. The problems are listed in detail below:

However, conflict is not necessarily a bad thing. It will become a major problem if the conflicts are not resolved effectively. According to OB, conflicts can be resolved by increased understanding, group cohesion and improved self-knowledge. Open discussion is needed to resolve conflict and increase the awareness of the situation.

This will bring some insight into how they can achieve the common goals. Team members will have strong mutual respect and faith in their ability to work together once the conflict is resolved amicably. One important thing to resolve the conflicts is to do self evaluation. Everyone should examine their goals, strength and weakness, tasks, actions in close and enhance the positive aspects or behavior.

The best people in the picture to initiate this are Rob and Jeff. Rob and Jeff should initiate a serious of talks to understand the problems of Stuart and Cynthia and look for an amicable solution. While Jeff is a financial partner only, the trouble brewing among the Chan siblings could place his financial stake in the company at risk.

A good understanding and working relationship among the team members should be the most important goal for the success of their new venture. John Holland’s Typology of Personality and Congruent Occupations provides a model that attempts to match job requirements with personality. In his hexagon diagram, the theory is that the closer two personality types are to each other, the more compatible they are. In addition, the model categorizes personality types into six categories, lists the personality characteristics, and then suggests the most congruent occupations for the various personality types.

Holland classifies enterprising personality types as having self-confidence and ambition, and suggests congruency with small business manager occupations. Cynthia demonstrated her high energy and entrepreneurial tendencies when she devoted all of her free time to the tasks leading up to the opening of Cafe Latte. According to Holland, she then might be the right personality type to manage the business. Stuart Chan, however, already manages the family restaurant, but if we assess his personality using Holland’s model, he perhaps would be a conventional personality type, which prefers rules, and orderly, unambiguous activities. 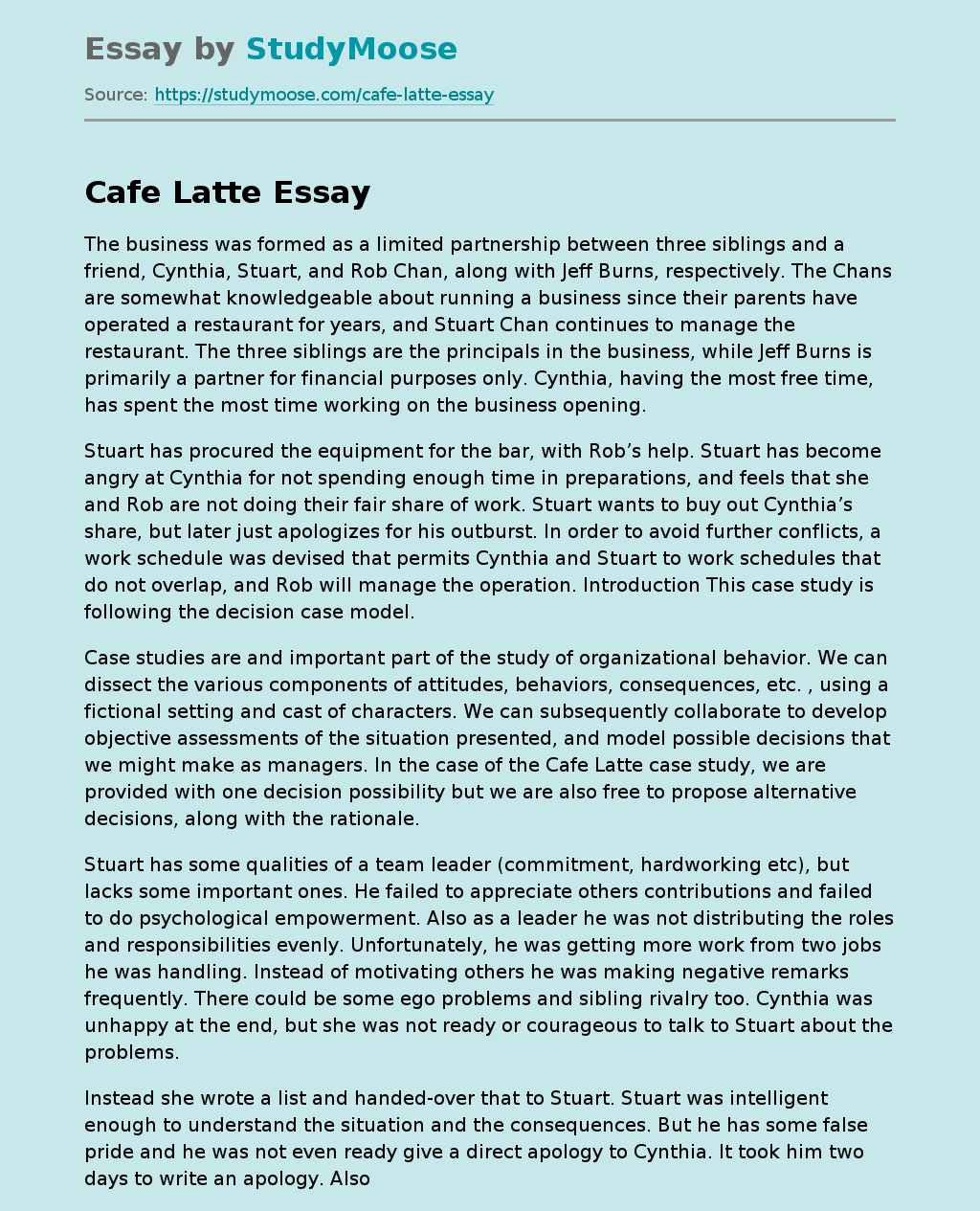