Text A is a transcript that comes from a popular television chat chow ‘The Jeremy Kyle Show’. The interview is between Jeremy Kyle and Andrew, a 22 year old man that has been accused of cheating on his wife. The show has a direct audience of the studio crowd but it has been televised for predominantly female viewers at home in the daytime. The show entertains its audience by revealing the personal problems of guests on the show whilst Jeremy Kyle councils them.

The text is quite confrontational, up front and aggressive. Text B is also a transcript that comes from a chat show; it is from the woman’s chat show ‘Loose Woman’. The interview is between four presenters and Haley Mills, a famous actress. The shows audience, just like ‘The Jeremy Kyle Show’ has also been televised for predominantly female viewers watching at home in the daytime. Unlike ‘Jeremy Kyle’ the show entertains its audience by talking about their opinions about topics and focusing on their life achievements.

The text is very positive and light-hearted.

Text A has a low register with colloquial language such as “you alright” and monosyllabic lexis such as “No”, “What” and “Yea”. A low register is also highlighted through the use of taboo lexis like “Fuck you!”. However text B has a medium register as it has greater formality, more complex sentence structures and free of taboo lexis. In Text B, Haley Mills uses a great number of hesitations, repetition of the personal pronoun “I” is seen many times in the text, for example, “I (.

A: //But putting me on T.V and making me look like a fucking wanker.” These interruptions disrupt the flow of the conversation but in this example also topic shifts. This is common in male speech. In text B positive politeness strategies are used throughout the interview to maintain respect between the interviewer and interviewees. Presenter 1 introduces Haley Mills with “Please welcome (.) Haley Mills”. This automatically sets respect to the interviewee. Positive politeness strategies are a common feature of female speech. More features of female speech like co-operative feedback are used. For example “is not the best is it?” and “Just about time isn’t it?”, this has been used to make sure they are going to receive positive feedback. Also hedging is used, for example “ But you know (.) er you know mmm”.

This negative politeness strategy is used as a nicer way of saying something. In Text A, Andrew is introduced in quite a different way with “Don’t (.) Pre (.) Judge (.) Andrew ladies and gentlemen.” This off record politeness strategy is directly addressed to the audience and suggests that Jeremy Kyle is mocking him. Mocking humour is also used through the text, for example “C’mon (.) be a big boy (.) Let’s do it”, here Jeremy Kyle is talking to his as if he was a child, also the hyperbole “That was the slowest walk in the history of the world” mocks Andrew’s entrance. The superlative adjective “slowest” exaggerates his pace of walking. Throughout Text A face threatening acts are used, for example repetition of “Don’t look at me like that” and “You were giving me a dirty look mate”. Andrew used these to try to raise respect for him and to maintain his self-esteem. These are all common features of a male conversation.

In Text A tripling of rhetorical interrogative utterances are used “Well why don’t you look happy? (.) What’s the matter? (.) Are your feet hurting? (.)”. This is used to quiz the interviewee and ‘put him on the edge of his seat’ to clarify Jeremy Kyle has a dominant speaker role. Competing for dominant speaker status is common in male conversation. In Text B the evaluative adjectives “great”, “wonderful” and “marvellous” are used to judge the “girls”. Intensifiers like “really” and “every” are used to add emphasis. Both features are commonly used in female speech.

Both texts use many interrogatives as the main point of an interview is to ask someone questions. In Text A Jeremy Kyle uses the minor interrogative utterance “What?” Andrew replies with the imperative utterance “Don’t look at me like that”. Andrew uses this face threatening act to order Jeremy Kyle to do something. In Text B however the utterances are much longer and complex. Presenter one asks the interrogative utterance “How long did it take you to get used to it?” Haley Mills replies with a declarative “Ummm (.) well I love animals anyway so I am terribly excited whenever we (.) we work with animals.” These longer utterances are more common in female speech than male.

Overall the two transcripts show great contrast between the two gender stereotypes. Transcript A is heavily filled with taboo lexis, monosyllabic words and face threatening acts, whilst Text B is filled with positive politeness strategies, co-operative feedback and intensifiers. 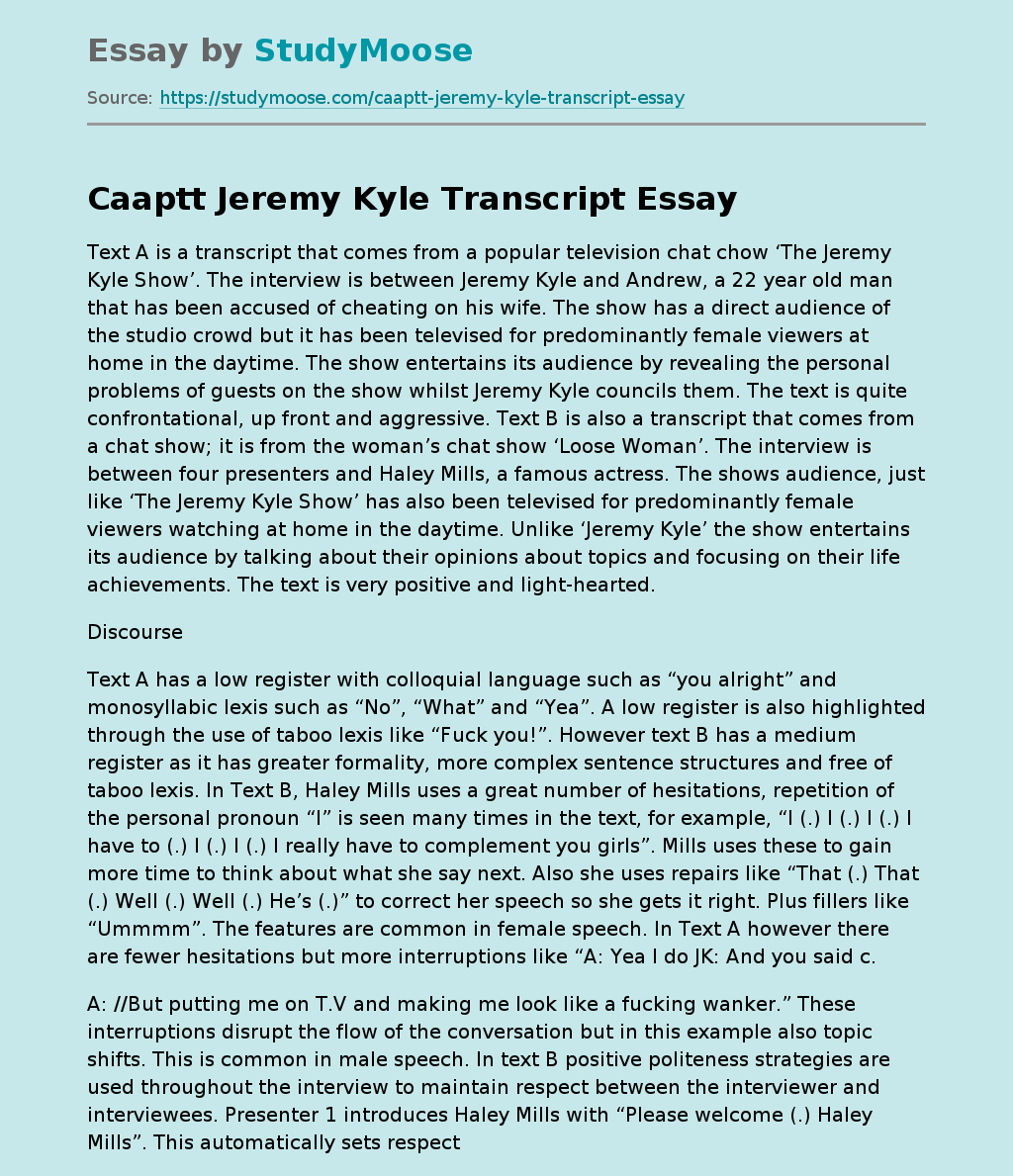