From this, they predicted that as the number of bystanders increases, the less likely it is than any one of them will intervene, or if they do so, they will intervene more slowly. Their research findings support this hypothesis. Work is regarded as foundational in the field of bystander intervention. IV = situational factors (group size, participant gender) DV = response (likelihood of and speed of) Lab experiments allow controlled conditions; e. g. y ensuring that many features of real emergencies are controlled for or eliminated, so that only manipulation of the IV has an effect on the DV.

Don't use plagiarized sources. Get your custom essay on
“ Bystander Intervention ”
Get custom paper
NEW! smart matching with writer

Some things are difficult, if not impossible to control for though – e. g. participant attitudes, societal values of the time, specific personal history of participants and so on. Unwritten assumption of experimentation is that explanations for social phenomena can be found by examining individual / group behaviour divorced from their ‘normal’ social context.

Critique of Darley and Latan© is by Cherry, writing from a broadly feminist and discursive perspective.

Such writers/researchers were keen to point out that: (a) Psychology, even though the mainstream tried to position itself as such, was not apolitical nor value free. Its methods subtly reinforced and legitimised oppressive attitudes and practices (power-relations in society at large and of researchers). b) Women’s experience was distorted by research and theory (power-relations of the experimental method).

Suggested rational and irrational fears about own safety needed to be taken into account too (as per Milgram and Hollander) as to why people did not help. Suggested that the presence of other onlookers weakened the need for any particular individual o feel that they needed to help – diffusion of responsibility and diffusion of blame.

Also, if other bystanders cannot be seen, we may conclude that someone else is already helping. To test their hypothesis, that as the number of bystanders increases, the less likely it is than any one of them will intervene, or if they do so, they Method – taped ‘stooge’ / participant in isolated room, could only speak when ‘stooge’ was not speaking, other participants also on tape. Stooge ‘has fit’ and participant cannot speak to the other people via the radio set up. number of assumed group members (2, 3 or 6)

DV= speed of response of real participant (marked as no response if > 6 minutes elapses before participant leaves room) Participants – 59 female, 13 male psychology students at NYU. Variations – sometimes taped participants’ were either male or female. One taped participant’ said he was a medical student. Victim’ was always male. Results Participants found the situation plausible – most were nervous when they reported the fit to the experimenter and were surprised to learn it was not real. The two exceptions were excluded from the analysis. Effect of group size highly significant (p 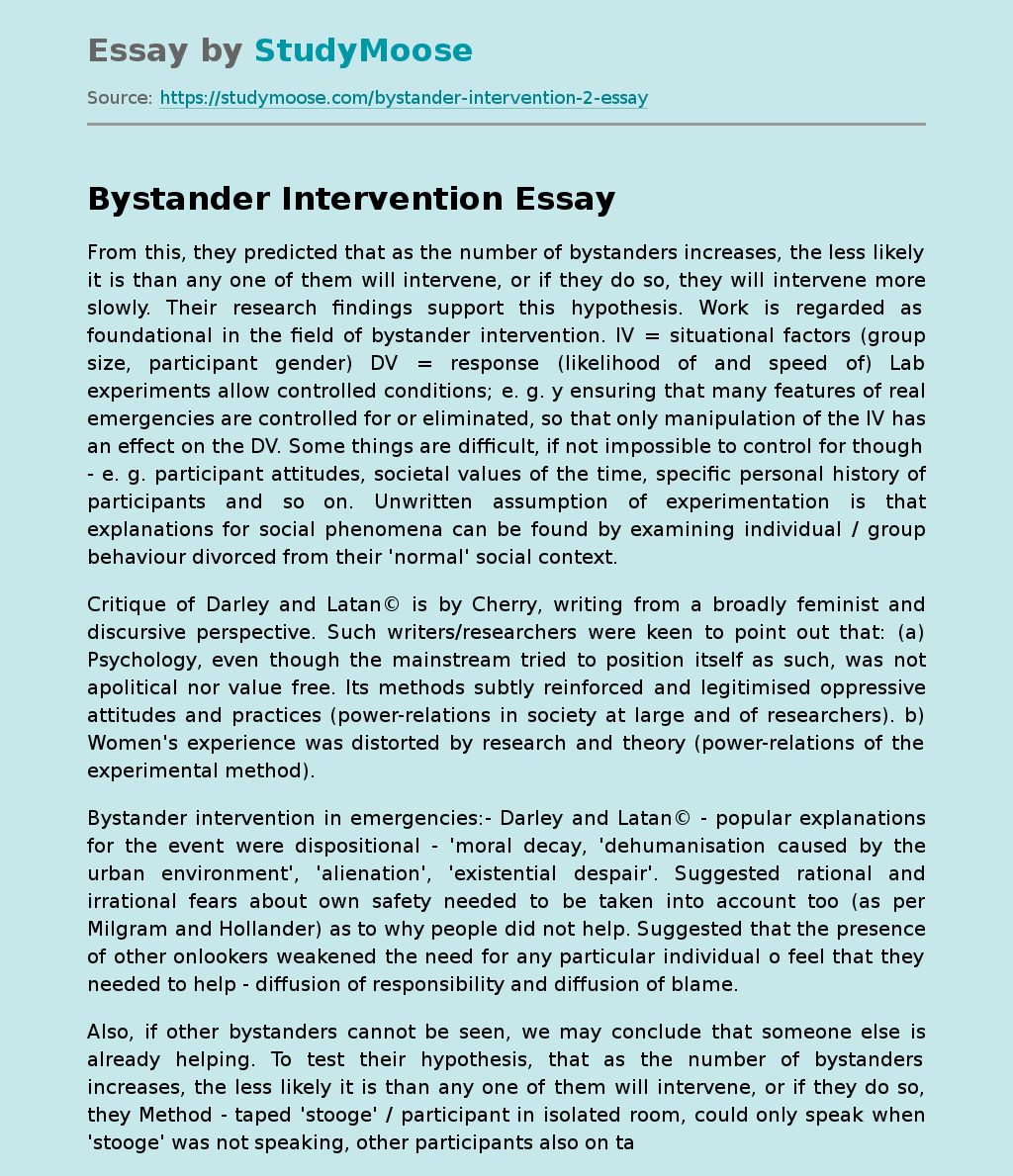