FreshDirect was launched in July 2001. Cofounder and former chief executive officer Joseph Fedele, Joseph Fedele was able to bring a wealth of experience in New York City’s food industry to FreshDirect. In 1993 Joseph Fedele cofounded Fairway Uptown, a 35,000 foot supermarket located on West 133 Street in Harlem. Only reason Fairway survived in that location was of Fairway’s low prices and quality selection of produce and meats which made the store a big hit with neighborhood residents and many downtown and suburban commuters.

Don't use plagiarized sources. Get your custom essay on
“ Business Success of FreshDirect Company ”
Get custom paper
NEW! smart matching with writer

FreshDirect primary business is for consumers who want to shop for their produce from the comfort of their own time and need. Being able to shop from work, home, app, pretty much anywhere and have it either delivered to you at work, meet up with them at a specific location or even just pick it up at their very own FreshDirect location is their goal, along with making sure the customer gets what they want and guarantee the freshness of their items.

FreshDirect is still in business and their corrent CEO is Jason Ackerman.

However as the case listed FreshDirect went through many CEO changes. Which isn’t always a great thing but since FreshDirect was growing so much, so quickly there was in need of changes to happen. “Cofounder Joseph Fedele had remained CEO until January 2004, when cofounder Jason Ackerman succeeded him in that position. Since then, FreshDirect has experienced multiple CEO changes. Jason Ackerman stayed as CEO of FreshDirect for a little over seven months, until Dean Furbush succeeded him in that position in September 2004.

Ackerman remained vice chairman and chief financial officer. The tenure of Dean Furbush lasted a little over two years. Steve Michaelson, president since 2004, replaced Furbush as the CEO of FreshDirect in early 2007.9 In 2008 Michaelson left for another firm, and FreshDirect’s chairman of the board, Richard Braddock, expanded his role in the firm and took over as CEO.” (Strategic Management 2012) FreshDirect main promise when opening was “Our food is fresh, our customers are spoiled…. Order on the web today and get next-day delivery of the best food at the best price, exactly the way you want it, with 100 percent satisfaction guaranteed.” Since FreshDirect is still in business and still improving since when they first opened they have not changed their main mission which was to prides itself on sourcing the highest quality food and freshest ingredients available for their customers and being able to deliver them when they want.

FreshDirect has been using the same strategy since they had opened in 2001. They have been able to fulfil what the customer wants and how they want it every time a customer is shopping. Being able to rate products and showing them the rate of how fresh the product might be helps every customer out every time. Able to deliver the same day and also next day right to your office or doorstep along with being able to pick up at the store is a strategy that FreshDirect has been using since the opened. Since they own their own delivery trucks they are able to deliver anytime needed for the customer. Low prices, and also having a minimum order to just $30 with a low delivery fee is great for any shopper.

THE ISSUES AND CHALLENGES FACING THIS COMPANY

Only problems, issues, and challenges that are faced by are the company are very small. Main one would be the fact that not a lot of people like to buy their produce online, since they are not able to pick it themselves, however FreshDirect has been able to show many consumers that they can be trusted, and many consumers are given a choice on what they want and how they want their meats. Another problem faced by FreshDirect was that many people were concerned about the pollution the trucks/vans were giving off by FreshDirect when delivering groceries. Also another issue that was a concern for the company was the volitions for parking that the company got, and blocking traffic in the city when delivering. FreshDirect had to pay for them, along with many boxes that were wasted when boxing everything different for each customer, there was no way for customers to return the boxes to the company for proper recycling.

Since the company is already doing well there is only a few things I would change. I would first lower the prices for delivery since many people will find that high, and along with that give discounts on separate bulk orders so it is like a wholesaler such as Sam’s or Costco or even BJ’s. If that is done, and shipping prices are reduced then they would not have to worry about Amazon and even Walmart effecting their business that are larger markets that could hurt the business.

I feel that in my opinion I really do not like shopping for groceries online, I am one of those people who like to shop in person for things like this, however I’d shop online a lot but for food, I feel like it is more of a hands on process that should be done then just ordering your meats and produce online. Even though the market for online shopping is good, since some people do not have time to physically go shopping, it is not a bad idea. When I was first reading this, I thought to myself, how can they succeed, but then realized in NY there are many people who are busy with their jobs and family, where this would eliminate some time in spending at a store. 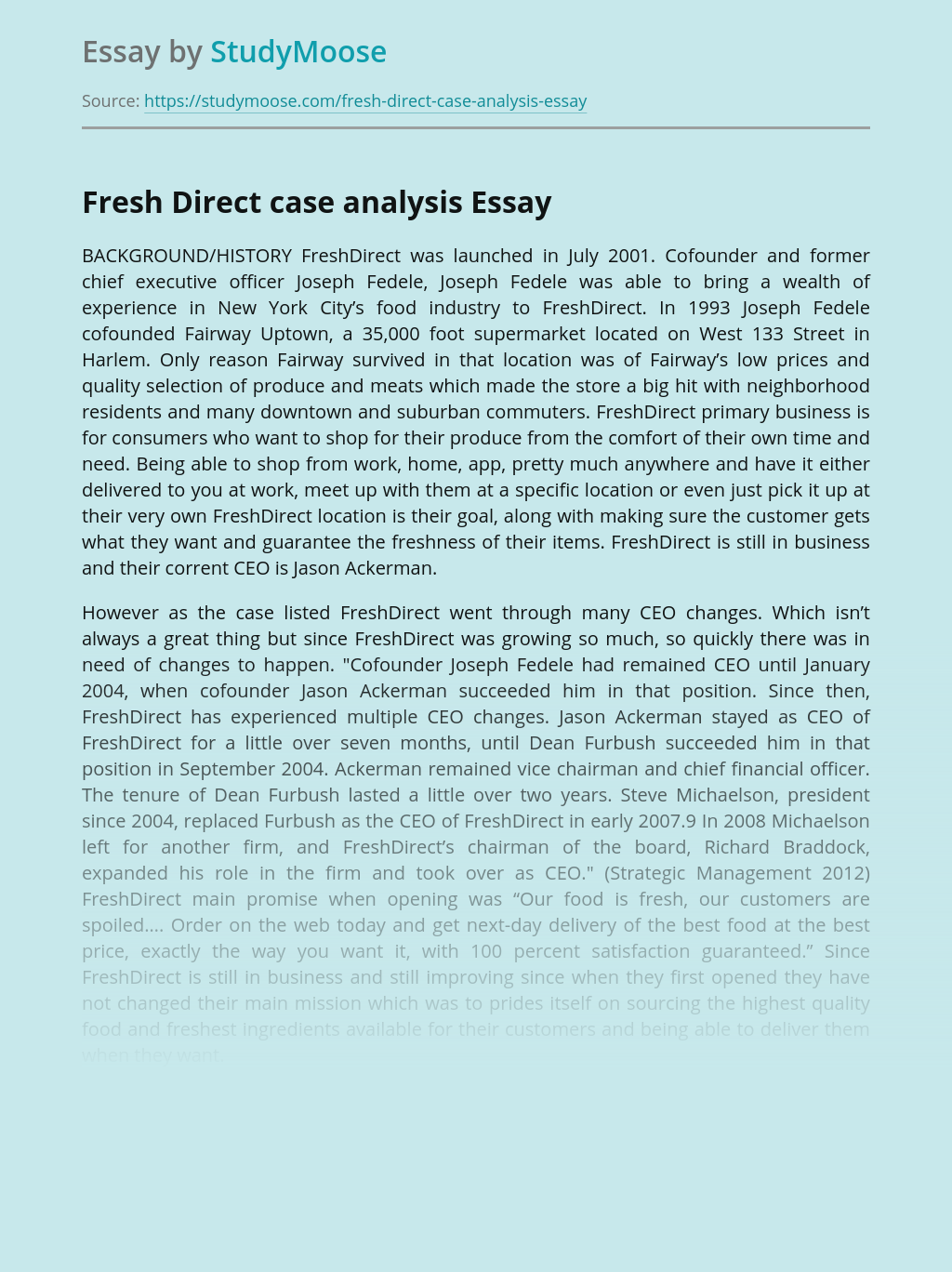