Business, society and government are placed in different situations depending on what the conflict may be. According to the case “Dickinson’s needle sticks”, all three different sectors were placed in a different position where society was seen to have no voice or empowerment. The society in this case were the nurses, patients and any health care workers using Dickinson’s needles. These sectors solved their conflicts through interacting with each other and finalise a resolution through many negative and positive outcomes which could be ethical and unethical.

Don't use plagiarized sources.
Get Your Custom Essay on ?Business, society and government Just from $13,9/Page

But then again, each sector strive for the position of power.

The major issue in the case “Becton Dickinson and needle sticks’ is the brand of syringes hospitals are using. These syringes had caused large amounts of patients, nurses and civilians infected with traumatic diseases such as Hepatitis B, C and HIV aids. Hospitals during the year 1990 was highlighted as one of the highest percentage of people be infected with diseases from syringes.

Through this major issue from the safety of Dickinson’s needle sticks had arise this issue through the relationship between business, society and government. Each sector has its own purpose, interests, values and ideologies within this case. From the society’s point of view, it could be seen that their minor role and power within the needle stick case dims the empowerment to execute the uses of Dickinson’s needles. Each sector stated and contributed their opinions to this conflicting interest where each sector fight for power through ethical and unethical ways to solve this problem.

The notion of ideologies and policies come from the perspectives of business, society and government. The relationship between these sectors affect each other in ways to ‘impose power over each other’, where each position introduce the concept of ethical dilemmas when a conflict arises. In this case, according to the case “Becton Dickinson and needle sticks” shows the perspective of society where the relationship with business and government underlies the position society has in this case. Although society is seen to be the minority, but the domination of certain ideologies in society promotes the acceptance of beliefs that benefit those in power (University of Western Sydney 2014, p.4) These societies were known to be the secondary stakeholders which include social activist groups and business social groups. The secondary stakeholders interact with businesses in relation to their interests and concerns. Within the case study, “Dickinson’s needle sticks” agencies such as the Occupational Safety and Health Administration (OSHA) trained and guided nurses through the step and process of using the Dickinson syringes. The society has decided to take part and help avoid increasing the number of accidental infection through the process of using syringes.

Therefore having nurses being under pressure within the health department, could cause stress in association with the functionality of the Dickinson’s needle process. The ethical issues and the aftermath of the needle sticks will then be associated with the government. With these diseases, people, patients and health care workers could possibly suffer harshly and lead to possible death; this is known to be an ethical dilemma. Families whom by stand loved ones with diseases, could also suffer through grief. The society would question and reflect how this situation could have been avoided. For the government to take some responsibility and the Dickinson’s business admit to their ‘unsafe’ syringes causing diseases would be morally and ethically right. The moral imagination of these family members would solve a part of their mourning and put aside to the conflicting issue.

In relation to ideology theories, classical liberalism would suit society in the case ‘Dickinson’s needle sticks’. According to Adam Smith, classical liberalism emphasised the value given to individual freedom and promoted individual initiative and self-interest, providing the greatest utility to society (University of Western Sydney 2014, p.11). Linking to the case with the classical liberalism theory, in 1992, a nurse, Maryann Rockwood was infected with AIDS due to the process of drawing blood using Dickinson’s needle. Maryann Rockwood had then sued Becton Dickinson for the ignorance of providing and manufacturing the safety syringe in different sizes, which had contributed to her injury.

Therefore with the classical liberalism ideology, this had allow individuals to have a voice in issues that are connected to business and government. By having Maryann Rockwood propose to this conflict, Occupational Safety and Health Administration (OSHA) had required hospitals and clinics free hepatitis B vaccines and provide safety needle disposal boxes, protective clothing, gloves and mask. The government had intervened and ethically solve this on behalf of the society. Therefore based on a societies point of view, their sociological imagination in relation to spreading preventable diseases allows the society to consider the complication is at ease and is avoided.

Businesses volunteer and associate themselves with charity and fundraising; this is known to be an ethical responsibility. Government is suppose to protect the society in which health would be classified as the top priority. In the case “Dickinson’s needle sticks” contradict the action of the government not demanding hospitals and health workers to use the most safest syringe in the market where it would prevent any diseases. Inclusive to the business, Dickinson attempted to market a ‘safer’ syringe, but unfortunately this did not meet the government and society’s expectation. Dickinson had released a newly engineered syringe where there was only one size, which was the 3-cc. Hospitals and health workers use more than one size of syringe, in this case the most used syringe was the 5-cc and 10-cc model. Having Dickinson’s business venture this, it could again lead to another uprising conflict. The sociological imagination of society would continue to uphold petitions in erasing risk that would affect health. In this way, parts of the three sectors have compromised a slight resolution referring back to the case study, “Dickinson’s needle sticks”.

From a business’ perspective, manufacturing a new and safer model of syringes to decrease the amount of conflict from the society and government. Changing and manufacturing a new and innovative product could cost the business a large sum of expenses. It can be said that business attempted to solve an issue yet it has not fully satisfied society in this matter. Government contributed through agencies such as the Health and Human Services, the Food and Drug Administration (FDA), the Centre for Disease Control (CDC) and Economic Cycle Research Institute (ECRI). It can be evident that government endeavoured to adapt to the Dickinson’s needle sticks to prevent such diseases by providing proper guidelines. Through the actions of the business and government sector, it can be said that it was an ethical act to adapt to any current problems.

The concept of capitalism refers to the importance in considering the rise of social struggles between those who can find work, who find work as long as their labour can increase capital and the owners of the means of production (University of Western Sydney 2014, p.5). On the contrary, having an increasing number of people infected with diseases, a high demand for employment within the health sector is needed. With the introduction of capitalism, this allowed individuals a chance of employment and benefits government to assist those in needing medical help. Colonialism has influenced the governments role in the case “Dickinson’s needle sticks”, where providing free vaccines and giving health care workers protection clothing will benefit the society in the long run where the risk of getting infected with a disease is minimal chance.

Considering the diversity of global business situations, the interaction between business, society and government become more available in solving a conflicting issue of interest. With the freedom of voice, due to the introduction of capitalism from colonialism, society is allowed some sort of power when it comes to delivering satisfaction and benefits such as social welfare system. Therefore, the interrelationship between these sectors allow the conflict of interest to be resolved through continuous petitions, debates and many law cases.

Based on societies perspective relating to the issue raised throughout the case, “Dickinson’s needle sticks”, it can be said that society was seen to be the minority against business and government. It could be seen that society was the underdog against business and government, but society was the main lead in this clashing case.The society in this case, were the nurses, patients and health care workers where they were affected most through this conflicting issue. It could be said that government had the
most power by avoiding the increasing percentage of people being affected with inimical diseases. In association to this, business did have an unethical perspective based from the society, where they could have quickly avoid and adapt to the issues being afflicted upon society. Hence, it would have been a social responsible act if the government immediately extracted this type of syringe and replace a safer needle stick.

Crossman, A 1991, The Sociological Imagination, Introduction to Sociology, viewed 20 April 2014, .

Fan, Q 2014, The Role of the State: Ideologies & Policies, lectures note distributed in Business, Society and Policy 200158 at the University of Western Sydney, Parramatta on 21 April 2014. 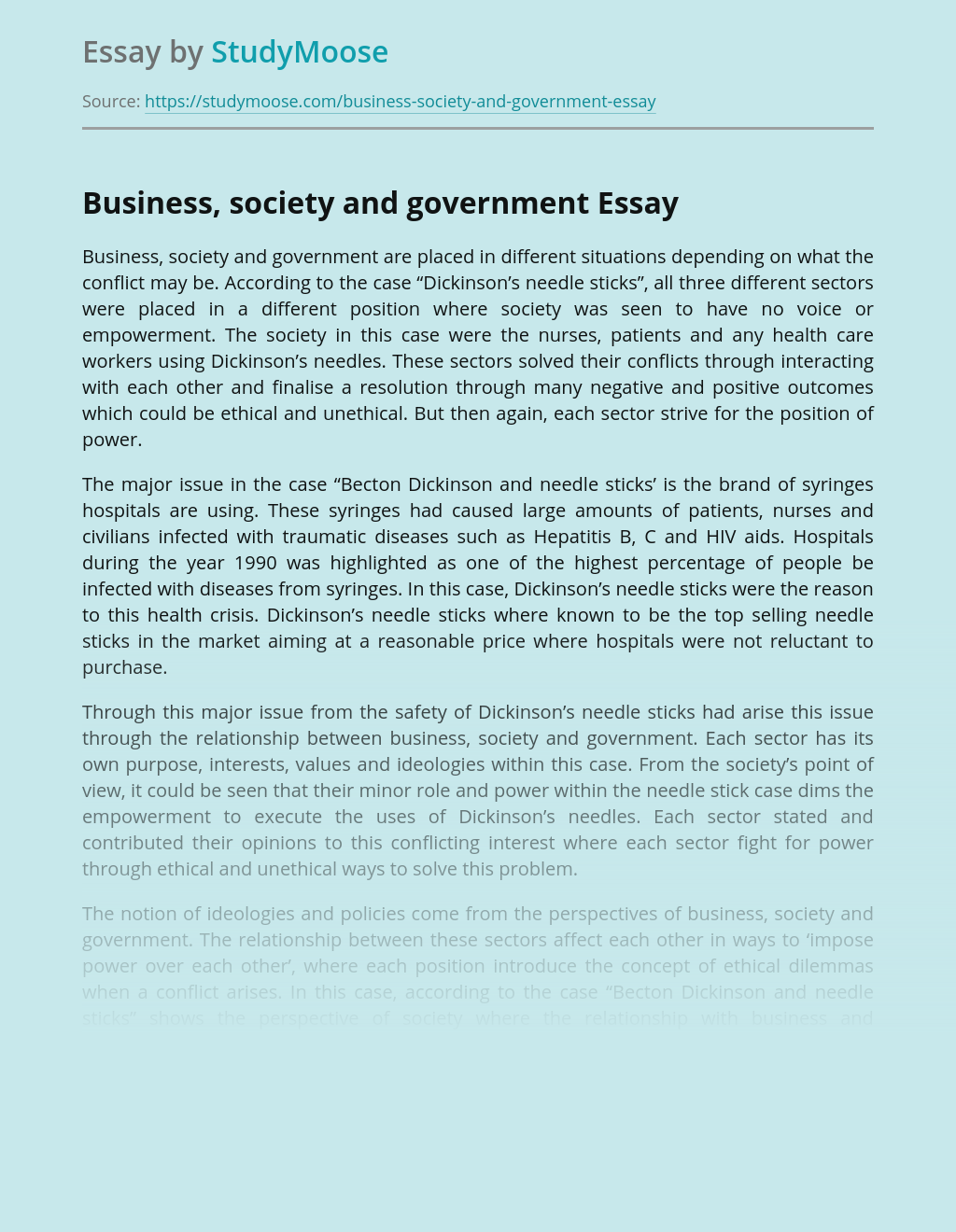 This essay will discuss the Case study by firstly identifying four elements of contract, then justifying duties of Mr. Martin with applying the principles of pre-existing contractual duties. Finally a discussion about part payment of debt and promissory estoppel will be explained. Likewise, this essay will evaluate the knowledge of common law and agency relationship....

Dorothy L. Sayers states “Wherever you find a great man, you will find a great mother or a great wife standing behind him.” Man is a societal construct that is structured and molded by maternal influences and female insight. Typically one is a product of its environment, however Robertson Davies in “Fifth Business,” deliberately uses...

View sample
Get Essay
Creating a sense of community

Introduction Organizations, leaders and employees often need to be commended on a job well done and celebrate it with some exceptional time off from work. This is a positive step for the organization because it not only shows appreciation for those individuals who come to work every day to make sure that their organization achieve...

1. Overview of the Business Noodle Express is a noodle shop that offers Healthy Noodles. All the ingredients are prepared fresh and ready to cook. The noodles contain protein, carbohydrates, vitamins and minerals. The way we prepare the noodles is different from the usual way on how it is prepared here in the Philippines. The...