Business Management of The MCI

This case profiles MCI’s merger debate between Verizon and Qwest in 2005. At this time, many other companies are merging due to the industry consolidation, therefore forcing MCI to keep up with its competition. MCI was acquired after a bidding war between WorldCom, British Telecom and GTE, with the winning bid being a $37 billion offer from WorldCom. MCI-WorldCom then acquired many other communication companies excluding Sprint due to a U.S. Justice Department ruling. WorldCom operated throughout its filing of bankruptcy, resulting with MCI being not only the surviving company, but one of the most extensive networks in the world.

Don't use plagiarized sources. Get your custom essay on
“ Business Management of The MCI ”
Get custom paper
NEW! smart matching with writer

After posting losses in 2004, MCI must undergo a strategic process in which to choose the better bid, Verizon or Qwest, in order to stay on top of the industry.

Many general environmental trends are effecting Verizon, Qwest, and the communications industry as a whole. The always changing technological needs are shifting from landlines to wireless, where Verizon has seen about one in five people using their wireless phones as their primary forms of communication.

However, Qwest is still generating a strong majority of its revenue from their wireline segment, and will therefore have to eventually undergo the process of shifting to wireless. Demographics also play a large role in the success of a company. While Verizon has acquired most of its customers in the densely populated northeast region, Qwest covers the West and Northwest.

This western population is less dense and uses landlines more frequently than wireless.

Economically, communications have undergone an industry wide decline. After the terrorist attacks on September 11, 2001, the demand for high-tech products has declined, forcing companies to respond to this change. Another environmental effect is the sociocultural shift to simplicity and ease. Rather than having multiple servers, it seems that consumers are going to look to make life easier with an “all-in-one” company, providing multiple services. Therefore, when MCI makes their choice in merging, they must consider both Verizon’s and Qwest’s responses to these environmental factors.

The industry also has a large impact on each company in communications, as well as the prospect of a merge. There are not any threats of new entrants into communications, as there are few companies which dominate the entire industry. Going along with this, there are intense barriers to entry. Machinery for production of phones and services would be difficult to obtain. Also necessary would be technology and machinery to enable the wiring of both landlines as well as wireless and internet communications. Therefore, there are many barriers which will withhold new entrants. In regard to economies of scale, Verizon has more customers and produces more, therefore lessening their cost to produce each item. Efficiency is not as high, and therefore cost not as low for Qwest who does not service as many customers.

Product differentiation is also an important aspect of Verizon versus Qwest. As stated before, these two companies primarily deal with very different geographic locations in the United States. Moreover, Verizon has international access whereas Qwest does not. Lastly, Verizon offers more services than solely their phone or internet. They go beyond what is demanded from consumers and offer great support which does not seem to be present for Qwest. These differences show that one company will not suffice in replacing the other, but rather MCI must make the correct choice to strengthen their company. In regard to capital requirements, Qwest had $17 billion in debt at the end of 2004, and some analysts wonder if they actually have any cash to back their offers up with. Therefore, the acquisition of Verizon does not seem to have the liabilities like Qwest does.

Knowing that Verizon is the more advantageous company, Qwest’s strategy was to outbid them by over a million dollars. However, this in itself was not enough. Therefore, Qwest upped its bid and made a presentation on how the synergies of Qwest and MCI would be beneficial. Verizon then upped their bid slightly, but was still far lower than the bid by MCI. During this negotiation, Verizon also offered a protection mechanism in which the value of stock would never be less than $14.75. However, throughout this bidding war, it was questionable whether Qwest was always being completely honest about their numbers. Some analysts even worried that they did not have the cash to back up their offers. Therefore, Verizon’s honesty put them at a competitive advantage over Qwest.

Both Verizon and Qwest have strengths, weaknesses, opportunities and threats which affect MCI’s vision of these companies. (Exhibit 1 and 2 show SWOT analyses for Verizon and Qwest, respectively)

Primarily serves U.S. markets, and is limited to 29 American states

Aware of the shift from analog to digital, wired to wireless, narrowband to broadband, and sees this shifts as a way to expand and grow in the future

Understands industry is shifting to wireless, and importance of all services in one

It seems as though MCI has four possible choices regarding the bidding war of Verizon and Qwest: choose Verizon, choose Qwest, choose neither or choose both. By choosing either company on their own, MCI would gain the monetary bid of that company, but then also have to be able to support a much larger company. Since there are hesitations whether or not Qwest has the money to back up their claims, it could be risky to take on a merger with them. However, a strong company like Verizon seems like they would be able to hold up their side of the deal while bringing positives to the newfound company.

MCI can also choose that they are a strong enough company without merger with others and choose to stay on their own and remain competitors with Verizon and Qwest. This would be a good option if they felt stronger than the other companies, but Verizon poses threats to the stability of MCI so I do not think this is their best option. Finally, MCI could merge with both Verizon and Qwest, almost taking over the telecommunications industry. I do not think this would be the best option, as it would be a very big change in a very short time and the overall company would have to make drastic changes.

It might end up hurting the company in the long run to invest so much in trying to please so many new consumers. Therefore, if I were the board on MCI, I would choose to merge with Verizon. This strong company has a lot to bring to the table, with loyal customers and a strong background. The merger between Verizon and MCI would hopefully prove beneficial in the long run, changing the way the telecommunications industry functioned.

Business Management of The MCI. (2016, Sep 27). Retrieved from https://studymoose.com/business-management-of-the-mci-essay 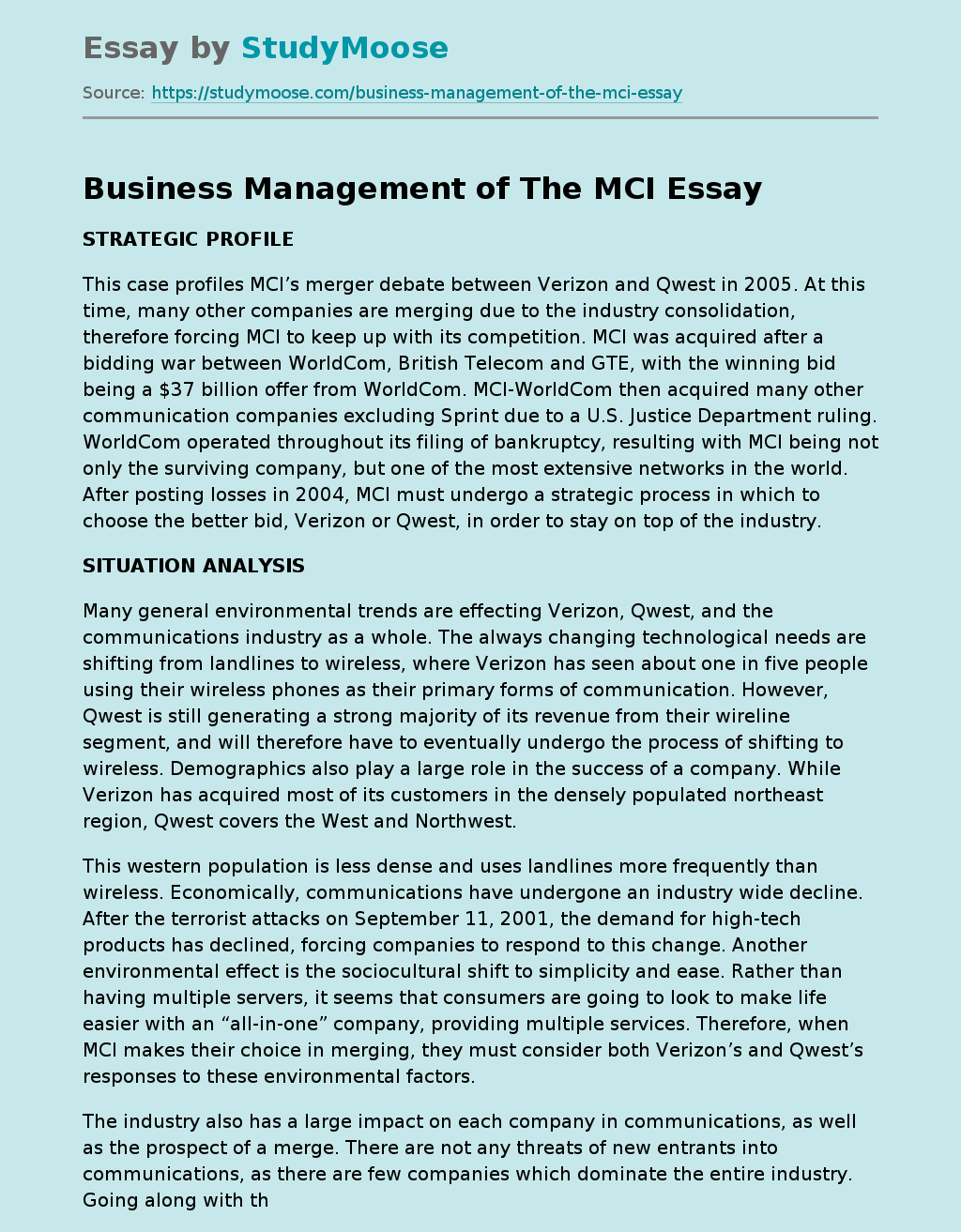