Business Law: Unit 6 Assignment 1
Specific Performance
In the realm of contract law there are many ways of addressing breach of contract. The purpose of this paper is to analyze four separate scenarios and decide if the remedy of specific performance would be applicable to any of them. Specific performance is, “An extraordinary equitable remedy that compels a party to execute a contract according to the precise terms agreed upon or to execute it substantially so that, under the circumstances, justice will be done between the parties.

” (retrieved September 7, 2013, from http://legal-dictionary.thefreedictionary.com/Specific+performance) Or, to put it succinctly, the court will order the contract to be fulfilled as written, with no damages awarded. Generally, however, two circumstances must apply before specific performance will be granted; monetary damages must be inadequate to the situation and the subject matter of the contract must be unique. (source, Fundamentals of Business Law: Summarized Cases, Miller and Jentz, 2010, ch 12, pg 246) Scenario A

Tarrington contracts to sell her house and lot to Rainier.

Then, on finding another buyer willing to pay a higher purchase price, she refuses to deed the property to Rainier.
Land is always a unique subject. It has a specific location and properties that even a parcel directly adjacent might not have. And the house that sits on the land may differ substantially from those around it. For example, one parcel of land may be relatively flat and good for commercial development, but the property right next to it may be very hilly and rocky, making development more difficult.

For these and other reasons a buyer simply cannot go out and find an exact replacement. In our scenario Tarrington has breached her contract with Ranier and Ranier can rightly ask a court to grant the remedy of specific performance and order Tarrington to fulfill the contract. That is unless she actually sold the land to the other buyer. In that case, Ranier would have to pursue damages as remedy. Scenario B

Marita contracts to sing and dance in Horace’s nightclub for one month, beginning June 1. She then refuses to perform.
This case is not one that meshes well with specific performance. This is simply because it deals with a contract for personal service. The text of the thirteenth amendment to the Constitution of the United States says, “Neither slavery nor involuntary servitude, except as a punishment for crime whereof the party shall have been duly convicted, shall exist within the United States, or any place subject to their jurisdiction. (emphasis added)” (retrieved August 7, 2013, from http://www.law.cornell.edu/constitution/amendmentxiii) Marita’s contract is for her to sing and dance and while her performance might be unique, it is a personal service and if a court were to force her to perform that would certainly be involuntary servitude. However, she is in breach and Horace would still be able to sue her for monetary damages. Scenario C

Rare coins are by definition unique. In fact their value is wholly derived upon their rarity. Also monetary damages would be completely inadequate – while coins, like art may have value as investments, collectors often pursue ownership of such items for aesthetic reasons and not just economic ones. While we are light on specifics in the scenario, as a general situation I believe specific performance is warranted here. There may be a situation where it would not be, I suppose. Perhaps if another coin was readily available and Edmund pointed that out to Juan, conflict could be avoided and then I doubt Juan would be able to make an argument for damages. Scenario D

Astro Computer Corp. has three shareholders. Among them are Coase, who owns 48%, and Cary, who owns 4%. Cary contracts to sell his 4% to DeValle but later refuses to transfer the shares to him.
Ordinarily I don’t believe that shares of stock would fall under the specific performance remedy. But in this case we’re dealing with a slightly different situation. The fact that there are only three shareholders means that Astro Computer Corp. is a closely held corporation. A closely held corporation is, “Any company that has only a limited number of shareholders.

Closely held corporation stock is publicly traded on occasion, but not on a regular basis. (emphasis added)” (retrieved August 7, 2013, from http://www.investopedia.com/terms/c/closely-held-corporation.asp) This means that even though the stock is not as controlled as totally privately owned company would be, it’s shares are not traded on a daily basis like companies such as Apple or AT&T. So it follows, then, that Astro Computer stock is a unique item that simply can’t be replaced by simply going to the local stockbroker. Additionally, those shares of Cary’s would give Coase a controlling interest in the company and that makes them even more unique and renders a monetary solution inadequate. Therefore, I believe that Coase has a very good case for a specific performance remedy.

In each of these scenarios we find subtlety of law, logic and, hopefully, justice. They also point out very good reasons to ponder well before entering into a contract, as you may find that regardless of what you eventually want, your signature on that contract could mean you must fulfill the terms even if you would be willing to pay money to get out of it. 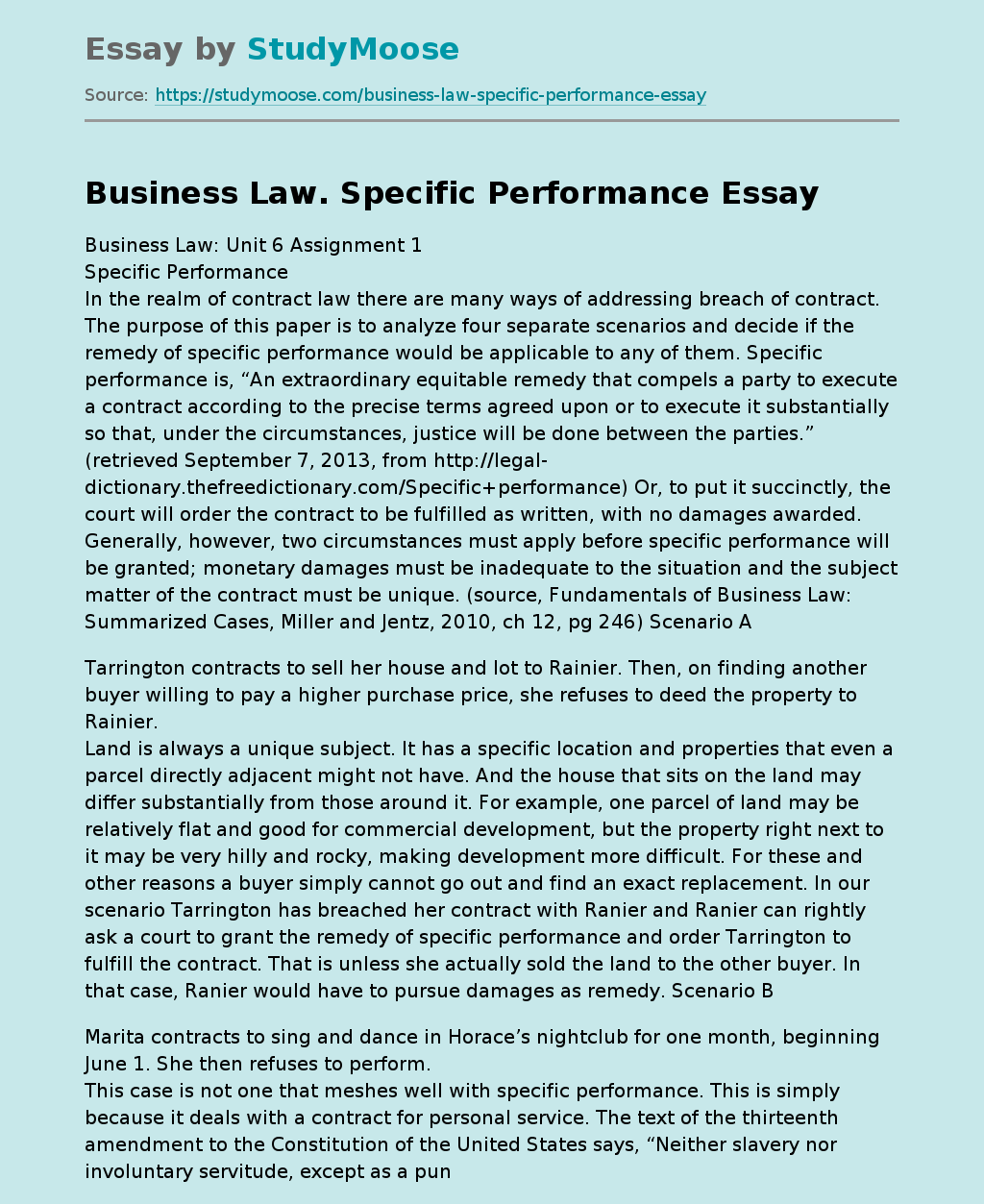