Forming a contract there must be six essential elements which are acceptance, consideration, intention to be legally binding, capacity of the contract and finally legality of the promises.1To archive an agreement between the offeror and offeree there is a formula whereby offer+ acceptance=agreement.2An offer has to be created firstly. An offer means the indication by one person to another of his willingness to enter a contract with the other person on curtain terms.3An offer can either be written or oral example of an offer are email, letters, verbally offering something and internet.

Don't use plagiarized sources.
Get Your Custom Essay on Business law conditional acceptance Just from $13,9/Page

Acceptance is an act performed by the offeree by the way of acceptance of the offer and which therefore creates a binding contract between the both parties.

4 Besides that, there are other natures of acceptance which is counter-offer. Counter-offer is an offer that the offeree has countered the original offer by suggesting a new offer. According to the court counter-offer will automatically destroy the original offer.5Besides a counter offer an offeree can also request for more information. People tend to see this as a counter offer but the court has decided that this is a request for more information it’s a mere inquiry and not a counter offer.6The case of Stevenson Jacques & co v Mclean explains that Stevenson asked for the price but whether he can deliver the money over two months or if not the longest limit would be given, but there was no response form McLean and Stevenson cabled that he accept the offer, but McLean has sold it to someone and said that Stevenson counter offer the offer. The court has decided that Stevenson was requesting for information not counter offering the deal.7

To reach an agreement the both parties has to have a “meeting of the minds”.8This means that for an agreement to be occur the acceptance of any offer should be unconditional and complete.9The case that develop the law that acceptance must be unconditional, clear and unequivocal is ‘Masters V Cameron’.10 The court had to decide whether the sale note was a binding contract.11 The sale note had a clause that Cameron solicitor had power to prepare the contract that in favor of Cameron demand, masters had to force to accept any demand that Cameron decides and it also was a preliminary agreement and not a conclusive document.

The court held that there was no binding agreement between both of the parties only they had condition to the agreement where one party doesn’t accept it. In other words the both parties was in a negation stage. The high court of Australia had to make the same decision if any future cases arise with the similar facts.12Besides that, similar problem had surfaced in the case of ‘Souter V Shyamba Pty Ltd.13The court had to decide whether the document on 1 may 2002 was a binding contract or the parties just agreed on the price of the hotel, intending that no binding contract would come into existence until the exchange of a formal contract prepared by their solicitor. The court decided that there was a contract between both of the parties because firstly. There were formalities between both of them. Secondly, there was no reference that the document had terms like “subject to contract” or “subject to finance”.

Lastly they had advice from their solicitor and they knew exactly what was happening. The court decided that the document on May 1 was a binding contract cause they had a price, the parties agreed and they had essential terms in that document.14There was a case that had an opposite decision of the court which is the case of ‘First Church of Christ, Scientist, and Brisbane as Trustee under Instrument 7020202154 v Ormlie Trading Pty Ltd’.15The court held that the parties had no intention of entering into a binding contract even though they have reached an agreement on the essential terms. The both letter had “in principle” in it. The court said that “in principle” indicates that there were no unqualified acceptance by the offeree of the offer.16This cases had strong court judgment that the first rule of acceptance that is must be clear and unequivocal and certainly not conditional.17 Conditional acceptance might also been known as qualified acceptance.

This type of acceptance is known as when a person to whom an offer has been made tells the offeror that he or she is willing to agree to the offer provided that there are some changes are made in its terms or that some condition or event occurs. This is merely a counter offer this isn’t an acceptance.18The case that showed that conditional offer is a counter offer is ‘Hyde v Wrench’.19The story was when an offer was made to Hyde by wrench to buy the property for $1000, but then Hyde made a new offer stating that can he buy it for $950.Wrench rejected this offer then, Hyde wanted to buy the property back with the original price of $1000 and wrench refused to sell it. Then, Hyde sued wrench to enforce the original contract. The court decided that Hyde and destroyed the original offer cause he counter offered the deal with a new offer and according to the court this will destroy the original contract and can’t be done anything by the offeror.20

Curtain contract of purchase of goods or real estate there is a term ‘subject to contract’. This means that the contract will be accepted when the subject or the purchaser has the reasonable finance to purchase.21The case that develop this condition is ‘Meehan v Jones’.22 Agreement containing this phase can be indeed binding, while noting that the effect of this clause has to be ultimately decided by the both parties. The court had decided that the agreement was binding and this phase wasn’t a condition implied by one person. This has to be fully determined by the purchaser if he has suitable financial needs to accept the agreement and has the intention to be legally bound by this phase. Deciding whether he or she has enough of financial need, the purchaser had to act ‘honestly, or honestly and reasonably’. Once the finance is obtained, the contract would come legally binding.

Current case like ‘Australian securities and investment commission v Fortescue Metals Group Ltd’ had no acceptance involved.23Even though, the both parties had essential agreement which had price, subject matter and scheduling. Fortescue Metals group Ltd had entered an agreement with a Chinese contractor to build an infrastructure for a mining work in South Australia. While they had an agreement between Australian securities and investment commission. The court had decided that there were no binding contract between the both parties even though, they decided with price matter and the scheduling. The court stated that there were no acceptance involved between the both parties because the party had left crucial matter in the offer and the other party didn’t accept the offer even though prices time and matter was discussed.

In conclusion, the high court of Australia has made it very clear that acceptance must be clear, unconditional and unqualified.If there are condition to the agreement it means that it’s merely and counter offer not the original offer. Besides that, incomplete agreement are not acceptance but merely the both parties are in a negotiating stage. Previous cases such as Masters V Cameron, Souter V Shyamba Pty Ltd, First Church of Christ, Scientist, and Brisbane as Trustee under Instrument 7020202154 v Ormlie Trading Pty Ltd has made it very clear how the court decides on future cases regarding acceptance. In my opinion, acceptance can’t be final if the offeree doesn’t accept the offer and acceptance can’t happen when both parties doesn’t want it to be legally binding. The current case like Australian securities and investment commission v Fortescue Metals Group Ltd had made it clear they followed their precedent cases about acceptance and how it has to be unconditional and clear24. A person can’t accept some of the agreement and discard curtain agreement this means they are not fully accepting the offer only negotiating about it.25 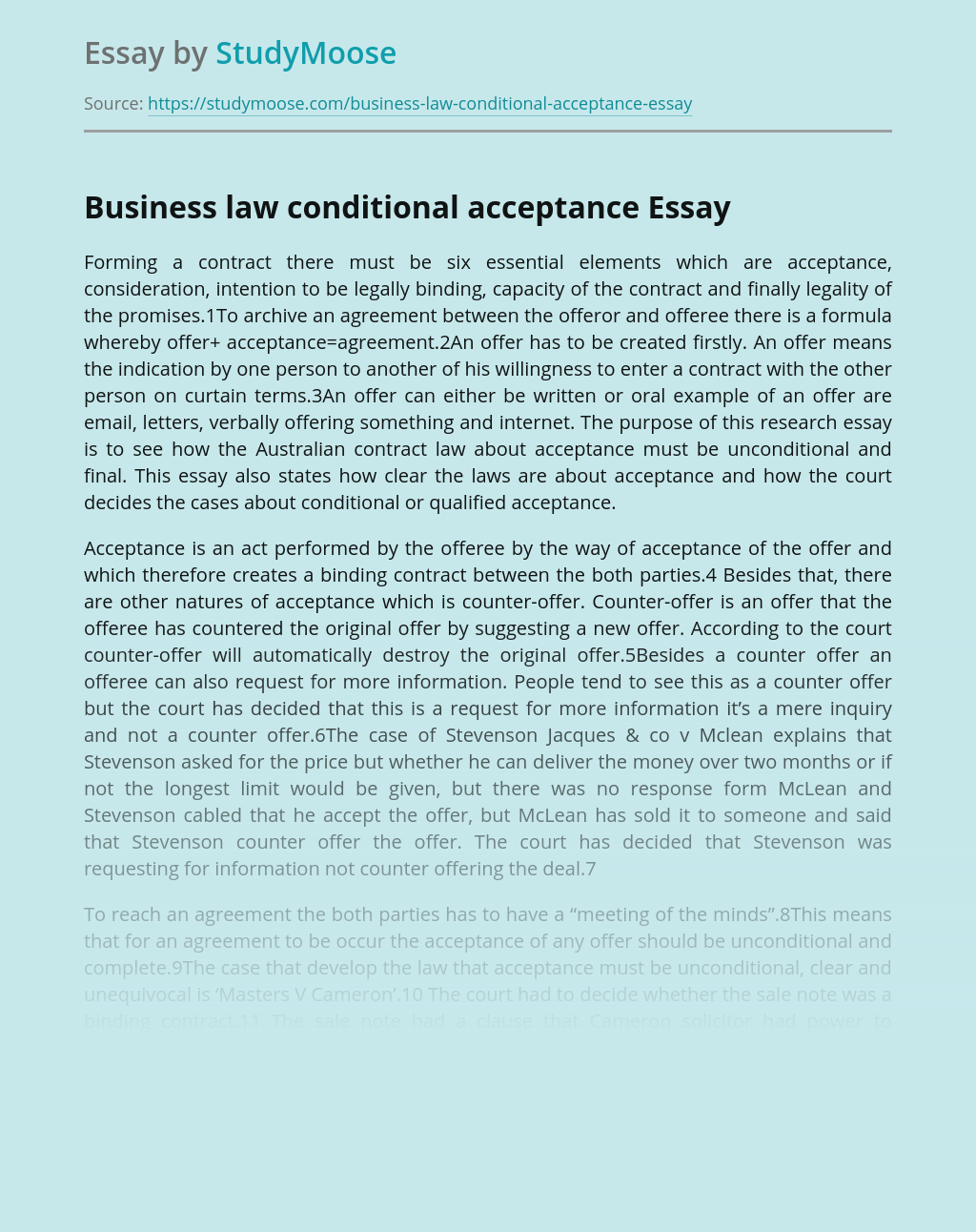 In this task I am going to be defining the recruitment process and documentation components. Recruitment is a process in which allows businesses to obtain selected qualified people to attend to a job vacancy. The recruitment process is the steps in order to successfully pick suitable employees that match the specifications. There are typically seven...

Different types of business information and their sources

Written Written interaction includes a choice of words, signs, letters and numbers. Composed communication is utilized at bmetc to make it possible for tutors to get in touch with moms and dads and trainees regarding the trainees’ progress in lessons and around the college; they do this by sending letters to the parents. A letter...

Get Essay
How to solve high employee turnover rate in a retail company or retail business?

Introduction The problem of high turnover employee rate is quite a spread problem that most businesses have been facing for years. Employee turnover has a negative influence on the efficiency of business, profits, customer service and satisfaction from customers in different businesses and industries. The recent study made by Roper Starch Worldwide, Inc. and Unify...

Business ethics and corporate social responsibility Introduction Anglo American is one of the world’s leading mining companies. It is a UK public limited company and operates on a global scale. Anglo American operates mainly in the primary sector of the world economy. This, as the name suggests, covers industries involved in the first stage of...