As the manager of Acme Fireworks, I need to gather information to help the owner determine whether or not he should continue to be a sole proprietorship or if he should switch to another business entity. I will help him do so by explaining each entity and how they relate to his business situation. I am the manager of Acme Fireworks, a fireworks retailer who sells fireworks, puts on ground display fireworks, and large aerial display fireworks. The company started in the owner’s garage two years ago and now has 15 employees that you manage.

Don't use plagiarized sources. Get your custom essay on
“ Business Entities ”
Get custom paper
NEW! smart matching with writer

The company started as a sole proprietorship, and the owner has never changed the entity. The owner has informed me that the company has received inquiries from several large businesses wondering if the company could create several fireworks displays on a regular basis.

The owner told the inquirers that the company could fill such display orders, and a price per display was agreed upon. It was discussed that most of the cost for a fireworks display is for skilled labor, insurance, and the actual service of setting off the fireworks.

No other details were discussed. The owner is anticipating that new employees will need to be hired, but he is worried that if the large orders for fireworks displays do not continue, the company will not have the funds to pay the new employees. The owner is now considering changing the business entity, but he does not know what entity to form or how to form it.

The owner has asked me to do the following:

Determine if the contracts with the businesses will be governed by common law or the Uniform Commercial Code (UCC), and explain why. Analyze whether the owner formed a contract with the businesses, and apply the five essential elements of an enforceable contract. Explain the potential personal liability to Acme Fireworks if a spectator is injured by a stray firework from a fireworks display. Discuss the different employment types and relationships relevant to agency law, and analyze the advantages and disadvantages of each type specific to Acme Fireworks. Explain why Acme Fireworks should not operate as a sole proprietorship. Recommend a new business entity, and provide rationale to support your recommendation. To address the first concern the owner’s contract should be Uniform Commercial Code (UCC) rather than Common Law due to the following: “Contracts law principles in general are uniformly understood and applied across the United States. Contract Law is governed by the common law and the Uniform Commercial Code (UCC Contracts vs Common Law Contracts, 2014).”

“Common Law would lead to rejections if any changes were made to the contract (quantities, counter offers, etc.). Its terms include quantity, price, performance time, nature of work and identity of offer. Common Law does not allow revoking of the option contracts” (UCC vs Common Law, 2014). “Common Law is primarily used in real estate and the law is made by the decisions of judges in individual cases” (Rogers, 2012). “In Uniform Commercial Code (UCC) minor changes do not have any impact and the original contract does not get canceled. The quantity is the main focus of the term in UCC. Offers made by a firm are irrevocable if the deal is made in writing in UCC” (UCC vs Common Law, 2014). “Uniform Commercial Code is a statutory law for certain types of commercial transactions, including sales of goods, which has been adopted by all 50 states.

Many of its rules are similar to Common Law, but it contains important differences” (Rogers, 2012). After reviewing both types of contracts I would advise the owner of Acme Fireworks to enter into a Uniform Commercial Code contract rather than a Common Law contract because it is a better type of contract for commercial needs. The next thing I am supposed to do is to analyze whether the owner formed a contract with the businesses, and to apply the five essential elements of an enforceable contract. “A contract is a legally enforceable agreement.

A contract comes into existence from the voluntary assent of two or more individuals to enter into a legally binding agreement. Mutual accord is crucial to the formation of a contract. One party, referred to as the offeror, makes an offer –a business proposition- to another; the other, known as the offeree, accepts. Provided that the other three requirements are present (consideration, capacity, and legality), a valid contract is formed.” (Rogers, 2012) The five elements of a contract are as follows:

The next thing I will get into is the personal liability aspect. At this moment in time Acme Fireworks is a sole proprietorship; this means that if a spectator is injured by a stay firework from a firework display the owner is fully responsible. In other words, his personal assets are not protected and could be sold to pay for the injuries that occurred. There are several different types of business entities that would better protect the owner’s assets if something like this would occur. “A sole proprietorship is the simplest form under which one can operate a business” (The Basics of Sole Propreitorships, 2014). It is not a legal entity and the person that owns the business is personally responsible for its debts.

A partnership has at least two partners. In a general partnership, both parties would be equally liable for the businesses debts. In a limited partnership one partner would be the liable party and the others would just lose their investments. A Limited Liability Corporation (LLC) is sort of the middle ground. In an LLC the business is responsible for its own debts and the people that make up the LLC are not. (LLC Basics, 2014) This means that all of the businesses assets can be liquidated, but the owners personal assets cannot.

A Corporations liability is equal to that of an LLC, but it is normally very large businesses that are interested in marketing that run corporations. It is for people who want their business or idea to go public. “A corporation is the most common form of business organization, and one which is chartered by a state and given many legal rights as an entity separate from its owners” (Investor Words, 2014). A Corporation is the most expensive form of business entity.

According to all of the data that I have gathered about this business, I believe, as the manager of Acme Fireworks that it is best to change the business from a sole proprietorship to a Limited Liability Corporation (LLC). I think that this is the best way to go because the product that we are selling does have some potential danger and someone could get injured. As of right now if someone was to get injured then the owner of Acme Fireworks would be held responsible. If the owner was to switch to an LLC then the business would be liable and the owner would not. 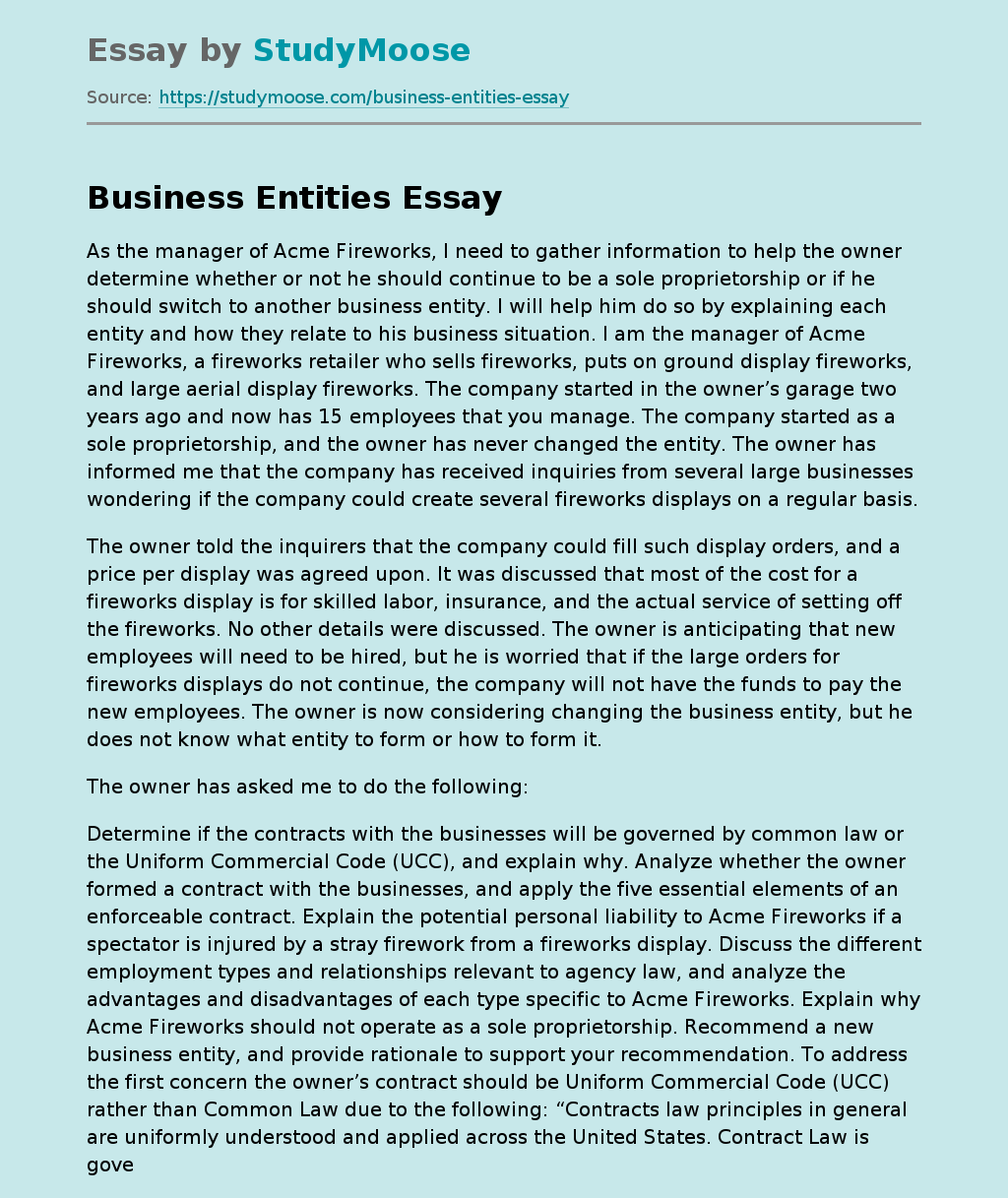