i) A windscreen purchased by a motor vehicle spare parts supplier;

Intermediate goods – by national accounts (GDP) windscreen primary production value has already been accounted. It is being resold at a deflated value as second hand goods.

Turn in your highest-quality paper
Get a qualified writer to help you with
“ Business Economic – Macroeconomic ”
Get high-quality paper
NEW! AI matching with writers

iii) A household cleaning service purchased by a family from a domestic cleaning service company; Final good – the resale value of the business contain value added. But it is not previously included in the national accounts.

iv) Coking coal Intermediate goods – as an ingredient it used into the production of other goods. As iron and steel, steam. Except being sold by exporting.

$800 billion is the nation’s GDP for the year. Because GDP includes the market value of final goods and services produced, despite the consequences of whether these products are sold. The unsold products are added to firm’s inventories and included in gross national and domestic investment.

c) Explain why a new truck sold for use by a transport company is a final good, even though it is a fixed investment (capital) used to produce other goods. Should the value of this truck then be added to GDP or should only the goods it transports be included in GDP?

A new product and produced for the ultimate user is the final goods so the new tuck is a final goods, the transport company and therefore it should be added to GDP. By the ‘expenditure approach’. When a firm buys and uses the new truck, it subsequently becomes an intermediate good into the production of other products in subsequent periods.

a) The consumer price index (i.e. CPI) is the most commonly used measure of changes in the general level of prices in Australia. Discuss some of the advantages and disadvantages of using this measure. ANS:

It is approved that there are no strong advantages in using this measure.

There are three main criticism of this measure and they are:

1. Typical average basket for several age and income groups within the population may not reflect true consumer expenditure prototype. As, retired people buy a bundle of products that differs quite markedly form that of a typical family with fewer children related items. The CPI based inflation rate may undervalue the impact of inflation on older people if the cost of medical services is rising faster than other items of the CPI.

Which of the following would cause a growth in the money supply? Answer yes, no, or possibly. If your answer is ‘possibly’ then explain the circumstances under which the answer would be ‘yes’.

(a)The selling of government securities to banks; – NO because of money supply goes down.

(c)An increase in government expenditure, financed by borrowing from the banking sector; – YES increasing money supply by the government outflow.

(e)It is agreed by the Treasurer and the Governor of the Central Bank to reduce the target rate of inflation – NO – fall down money supply because this will result in reserve bank RAISING the cash rate and using market operations reducing the money supply to back it up.

(a)DVD recorders imported into the nation from Japan; – Imports of goods (()

(b)Insurance cover purchased in the nation by overseas residents; – Exports of services (+)

b) The nation gives overseas aid to a developing country; – Capital transfers sent overseas from the nation (–)

(e)Some of the nation’s residents take a holiday in Bali; – Imports of services (()

(f)Interest earned by the nation’s residents on overseas assets; – Other income inflows (+)

(g)Running down the stock of foreign exchange in the Central Bank of the nation; – Drawing on reserves (+)

(i)New deposits made in banks in the nation by overseas residents; – Short-term financial inflows (+) 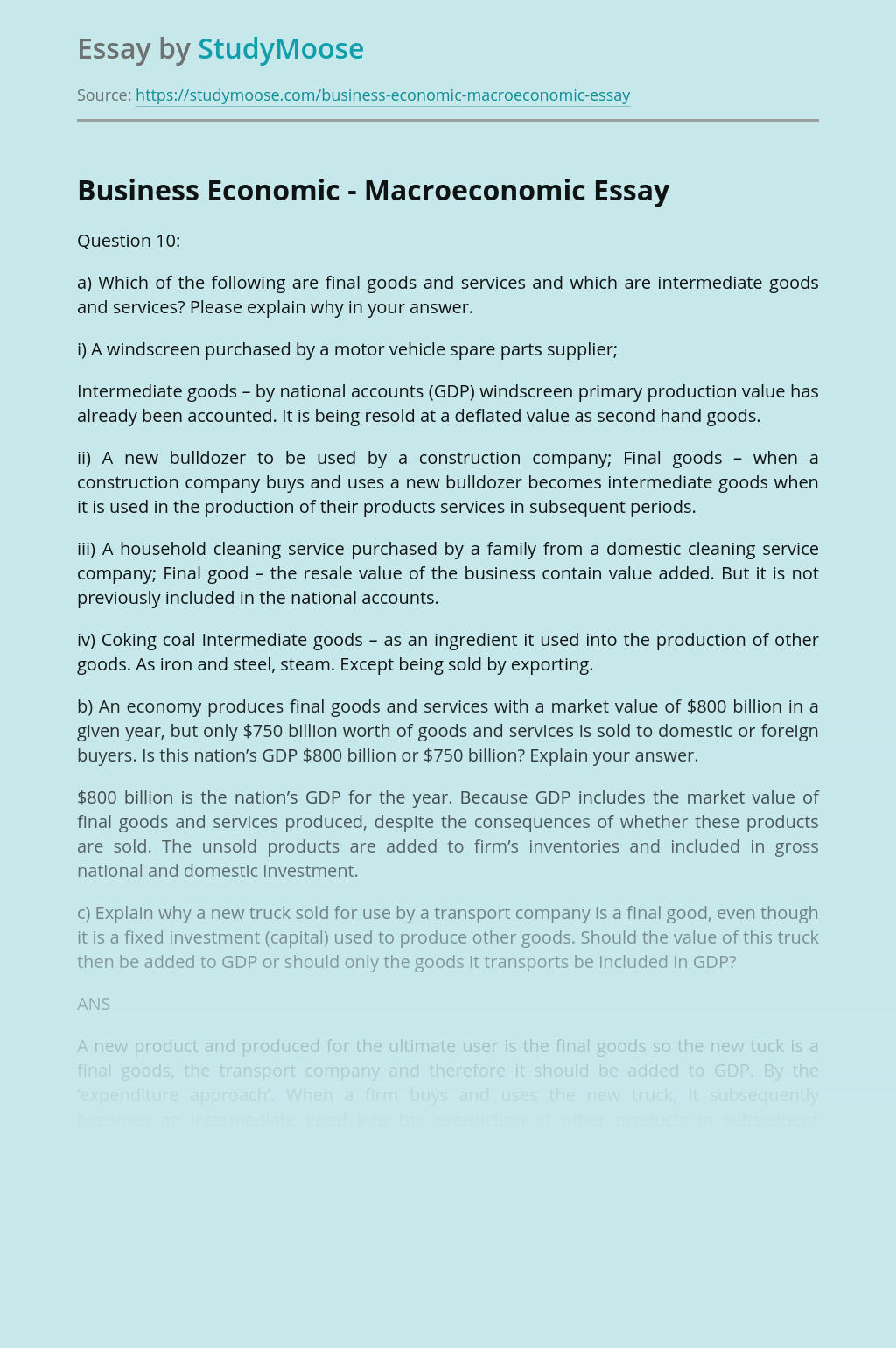 Turn in your highest-quality paper
Get a qualified writer to help you with
“ Business Economic – Macroeconomic ”
Get high-quality paper
Helping students since 2015
Stay Safe, Stay Original