1. Briefly describe any one of the communication models discussed in the textbook and/or lecture

Lasswell’s (1948) model describes communication as a one-way transmission of messages. The model shows the ‘who’ as the ‘source’, the ‘what’ as the message, the ‘how’ as the channel, the ‘whom’ as the destination and the ‘effect’ as the outcome.

2. Describe three of the of the tests you can use to enable ethical decision-making

Are we rationalising:
Identify if you are rationalising, that is justifying your reasons with excuses such as: Everybody is doing it
It’s not illegal
They did it to me
If I don’t do it someone else will

The golden rule:
Treat others as you would want to be treated
If you wouldn’t like a particular action or behaviour to happen to you, then don’t do it to others

Publicity test:
After making a decision, it would then be publicised for anyone to see or read about such as family, friends etc.

Turn in your highest-quality paper
Get a qualified writer to help you with
“ Business Communications Final Exam Questions & Answers ”
Get high-quality paper
NEW! AI matching with writers

If you are happy and confident in what you have done and do not feel any guilt then it is a good test to use, if not, then the decision was not ethical.

3. What is the role of ‘I’ statements in the communication process? Illustrate with an example

I’ statements are a way of sharing emotions and letting others know how their behaviour is perceived and how it affects you. One of the most effective ways to begin assertive statements is to say ‘I feel … when …’ For example, the message may be: ‘I feel annoyed when you don’t let me know you will be late.

’ People can express their needs and wants with an ‘I’ message. It shows their personal involvement plus a willingness to share their feelings. It also lets them own their own reactions. 4. Identify and explain the three techniques of persuasion as outlined in the textbook

Rhetorical mix:
Persuasion involves careful framing of arguments and a mixture of the three types of rhetorical appeal. Good communicators have the ability to use and combine the three types of appeal appropriate to the audience, subject matter and context.

logos, or the appeal to logic (price, variety, product information) pathos, or the appeal to the emotions (entertainment potential of the website, sensory appeal through audio/visuals, intuitiveness of navigation and the extent to which the website can be personalised for users) ethos, or appeal to credibility (privacy and security, corporate image and branding).

features of a product or service, and a clear and concise illustration of how to apply these features linkage of the features with the benefits to enable the receiver to understand ‘what’s in it for me’

Define: the abilities to recognise and regulate emotions in ourselves and others. Discuss: Emotionally intelligent people are responsive to others and able to use their own personal and social competence to express their expectations and values. Researchers have concluded that success is related to more than general intelligence (IQ). Successful people are emotionally intelligent. They have the personal and social competence to develop positive personal, social and work relationships, and to interact easily. Emotional intelligence influences organisational effectiveness in a number of areas: employee recruitment and retention, development of talent, teamwork, employee commitment, morale and health, innovation, productivity, efficiency, sales, revenue, quality of service, customer loyalty, client or student outcomes.

6. Briefly explain the difference between macro-culture and micro-culture including examples for each

The macro-culture comprises all the arts, beliefs and institutions (legal, governmental, business, educational and social) that characterise an ethnic group, race or nation, while a narrower micro-culture exists within the macro-culture. The micro-culture includes the characteristic attitudes and behavior operating within a group, an organisation or a nation.

Macroculture usually consists of the culture which influences the majority of the people. In United States, macroculture reflects to the traditions of Western Europe.

An example of a micro-culture could be the aboriginal community within the larger Australian community.

7. Describe the characteristics of Hall’s context model of culture

Hall’s context model demonstrates that communication and culture are not only about words. Not just text, but context. It explains how context can be measured and that there are two extremes – low and high

unconscious (as we absorb and imitate the daily habits, speech patterns and roles of our parents from infancy) or deliberate (as we are taught specific manners for greeting people, religious rites and rituals, and reading the Bible, Koran, Torah or other literature). Acculturation is the process of cultural adjustment and adaptation people experience as they move from one culture to another.

Example:
Adopting a culture’s values, symbols and behaviour.
Moving to another country and adapting to their customs whilst maintaining your traditions from back home. Differ:
Enculturation and Acculturation both involve adapting to society however acculturation is not an unconscious or deliberate process and mainly occurs when introduced to a new culture or environment. 9. What is cultural diversity? Why is it important for people to study diversity as they prepare to enter their career?

Cultural diversity is the variety of human societies or cultures in a specific region, or in the world as a whole. It is important that people study diversity as they prepare to enter their career because people can then accommodate differences in the background, perspectives and family responsibilities of other employees, and gather knowledge from the diversity of perspectives to generate new ideas and ways of doing things. It is also important, as they will already have acknowledged that the workplace is diverse and also respect other colleagues of their customs and cultural beliefs. This in turn prevents any form of discrimination, and judgement.

10. Hofstede’s five‐dimensional model of culture has substantial potential for aiding our understanding of individual cultures and for comparing cultures. What are the five dimensions in the model? Briefly explain any one of the dimensions.

Power Distance
Uncertainty Avoidance
Individualism vs. Collectivism
Masculinity vs. Femininity
Long-term vs. Short-Term Orientation
Uncertainty Avoidance
Defines the extent to which members of a culture feel nervous about, or are
threatened by, situations they perceive as ambiguous, unclear or unstructured. 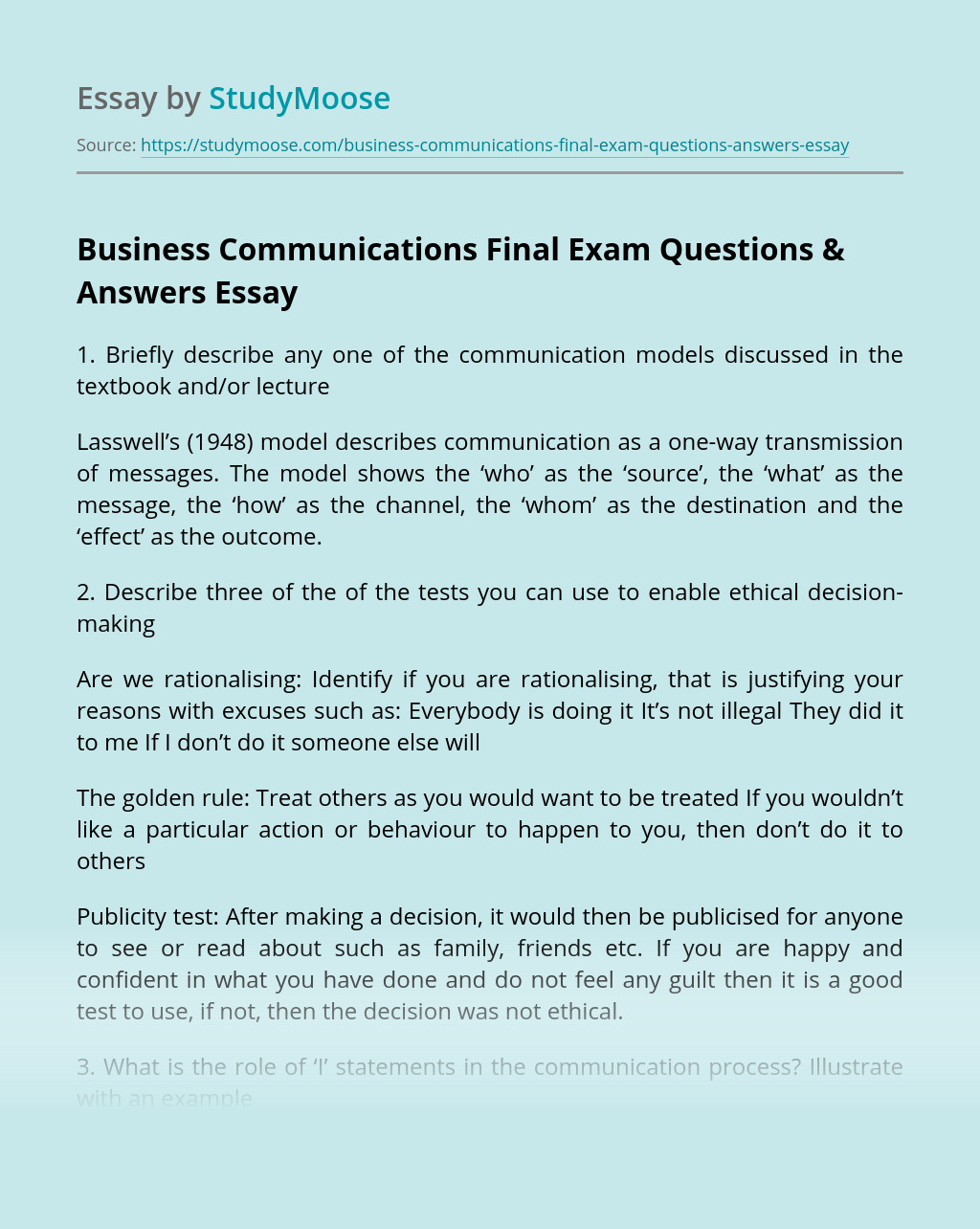 Turn in your highest-quality paper
Get a qualified writer to help you with
“ Business Communications Final Exam Questions & Answers ”
Get high-quality paper
Helping students since 2015
Stay Safe, Stay Original