Business And Organization: questions and answers

Don't use plagiarized sources. Get your custom essay on
“ Business And Organization: questions and answers ”
Get custom paper
NEW! smart matching with writer

The United States has a comparative advantage because of the many products we produce.

A country uses import tariffs to protect domestic products by raising the price of imported ones. A country uses quotas by voluntary agreement or by government decree. Dumping can result in the imposition of tariffs and quotas because it permits quick entry into the market or a firm’s product is too small to have a certain level of production.

6. How do social and cultural differences create barriers to international trade? Can you think of any additional social or cultural barriers (other than those mentioned in this chapter) that might inhibit international business?Social and cultural differences create barriers to international trade by cultural differences in spoken and written languages are different. A certain phrase in America can be defined as something very different and sometimes inappropriate in another culture. Body languages and personal space are also an affect. These differences can cause misunderstandings or uncomfortable feelings toward a specific business. Another cultural barrier may be a certain religion and something that person believes in. A business may be mocking a religion without knowing anything about it.

Licensing is a trade arrangement in which on company allows another to use its company’s name, products, patents, brands, trademarks, raw materials, and many others in exchange for a fee or royalty. Franchising is a form of licensing in which a company agrees to provide their name, logo, methods of operation, advertising, products, and other elements in return for a financial commitment and the agreement to conduct business in accordance with the original standard of operations.

Contract manufacturing is when a company hires a foreign company to produce a specified amount of the firm’s product to specification. Outsourcing is transferring manufacturing or other tasks to companies in countries where labor and supplies are less expensive. All of these ideas are similar in the way it helps businesses expand their work into more areas of their own countries or in foreign countries as well.

Business And Organization: questions and answers. (2016, Jul 25). Retrieved from http://studymoose.com/business-and-organization-questions-and-answers-essay 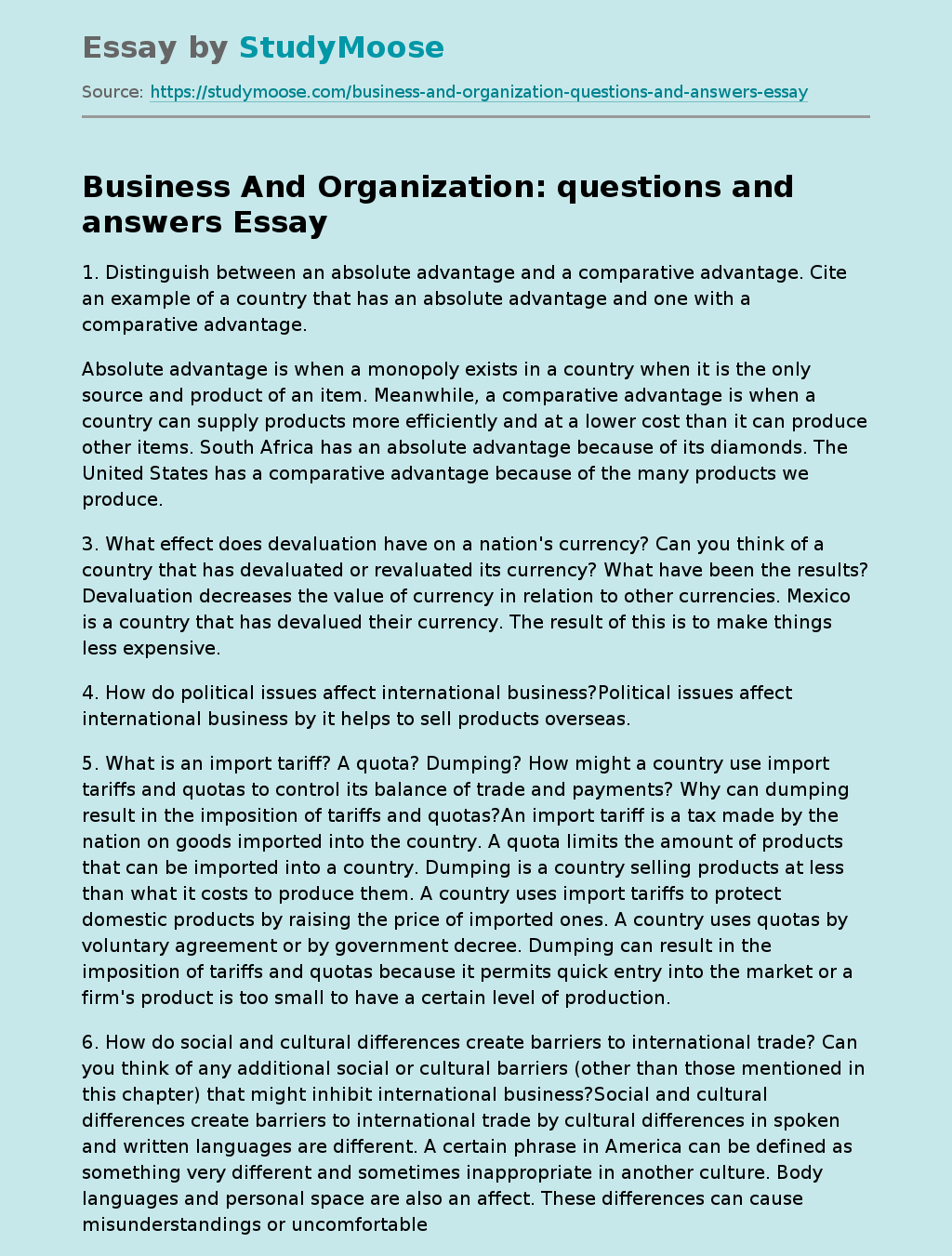