The speaker is George W. Bush, the relatively new, then-president of the United States.

The occasion was the aftermath of the terrorist attacks of September 11, 2001, which prompted this speech which was televised later that same day. One can assume that the nation was in a state of shock, with emotions running high.

The primary audience for this speech is the American public as a whole, with perhaps a special emphasis on those who are mourning the loss of loved ones and those who participated in the rescue efforts.

Don't use plagiarized sources. Get your custom essay on
“ Bush 9/11 Speech ”
Get custom paper
NEW! smart matching with writer

The speech is also meant to reach non-American audiences. One such audience is the terrorists who carried out the attacks and any nations that supported them. He also may be speaking to other non-friendly nations as a form of warning.

One purpose Bush had was to reassure the American people that everything is under control. Also, to express condolence and provide comfort to the whole nation.

Another purpose was to emphasize America’s unyielding power to other nations who might be under the impression that America was weakened by the attacks. Finally, Bush is issuing a warning to the terrorist groups who carried out these attacks and their supporters that they are in the sights of the American government.

The subject of the speech is the terrorist attacks of 9/11, and the government’s response to the attacks.

The tone of the speech starts out in a compassionate, sympathetic voice, where the president expresses grief and sorrow for those who have died.

In this speech, then-president George W. Bush addressed the American people following the terrorist attacks of September 11th, 2001. A relatively new and untested leader, Bush faced the daunting challenge of responding to a national crisis unlike anything seen since Pearl Harbor in 1941. The American people were in a state of shock, punctuated with moments of fear and calls for the blood of those responsible. In the speech, Bush speaks to the American people, but in doing so reminds (potentially hostile) non-American audiences of the unyielding power of the United States. He first tries to comfort the nation, and praises those working to respond to the tragedy, and here his tone is compassionate and sympathetic.

He uses vivid descriptions in this section of the speech to help underscore the sense of tragedy and loss. Later in the speech, his tone shifts to one of command and authority when he seeks to reassure the people of the processes that the government is going through to respond to the crisis. The speech ends with another tonal shift appropriate for issuing a bold-faced threat not just to the terrorists, but to those people and nations who support them. Throughout the speech, Bush appeals to the emotion of national pride and “American Exceptionalism” to rally the spirit of the American people on that dark day.

Effect on the reader:

This was probably a situation where the most powerful, eloquent words would not be sufficient. However, Bush manages to cover a lot of ground in this relatively short and to-the-point speech, and his messages to his various audiences were fairly clear. 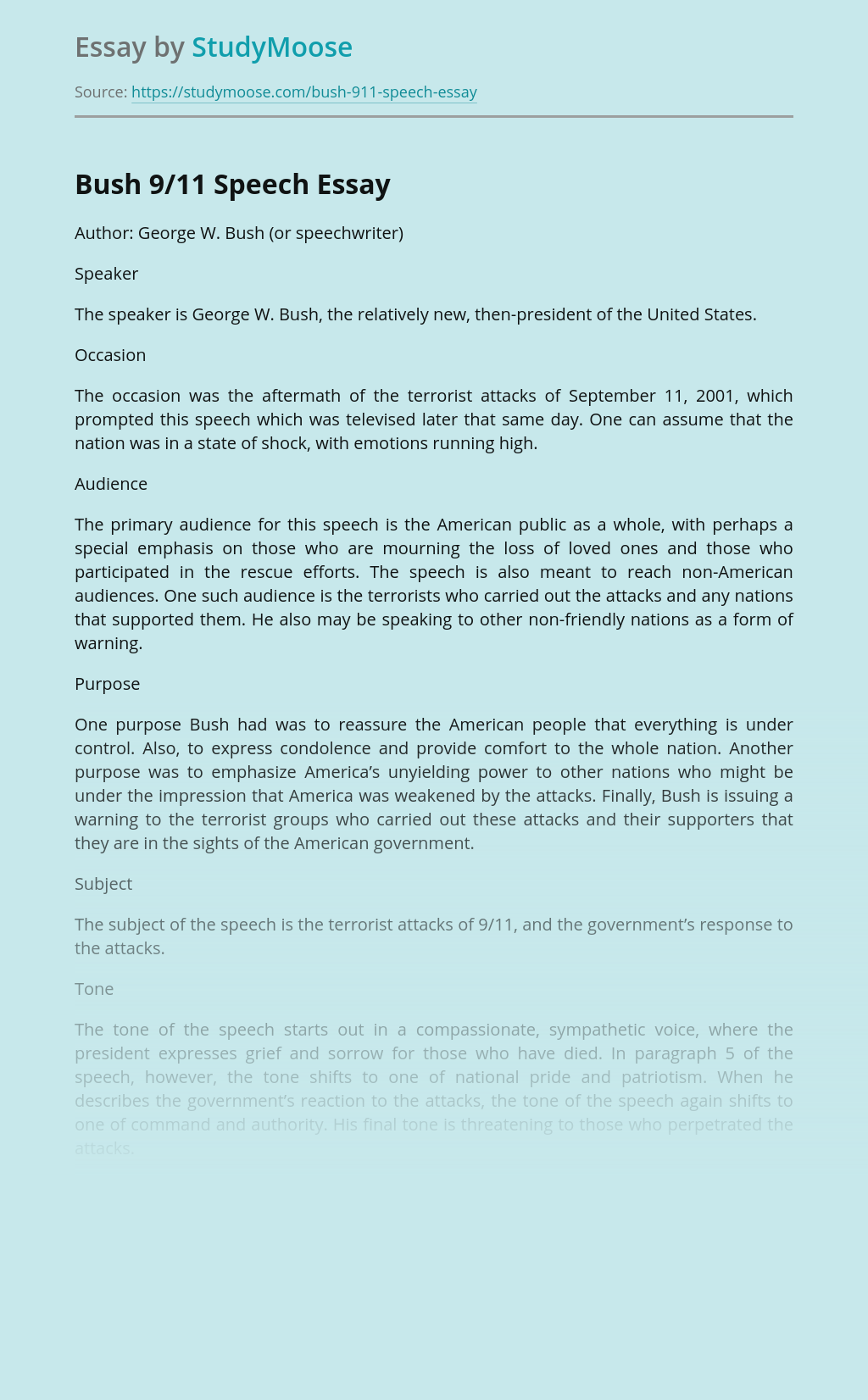