Have you ever been bullied? Have you ever cry yourself to sleep every night just because you don’t want to go to school the next day? Have you almost risk your own life just because you don’t want to live anymore? From the different experiences I had encountered and listened to, being bullied by the people around you really change one’s lifestyle and perception in life. Bullying is an unwanted, aggressive behaviour among school aged children that involves a real or perceived power imbalance.

Don't use plagiarized sources.
Get Your Custom Essay on Bullying Speech Just from $13,9/Page

The behaviour is repeated, or has the potential to be repeated, over time. Both kids who are bullied and who bully others may have serious, lasting problems. Close to half of all the children will experience school bullying at some point while they are at primary or secondary school or sometimes even if they are already adult and at work. Like my cousin who is now a sophomore high school student, he has been bullied nonstop for almost two years.

He was teased by his classmates because of his dumbness and quietness in class.

Once, his classmates had punched him because he doesn’t want to give his allowance to them. Parents should always check their child because more than 20% of children who are repeatedly bullied end up in jail. According to Doc Ryan of Cyber Bullying Seminars (2009), bullying has several forms. These are physical, verbal, social, psychological and cyber. Physical bullying is when a person (or group of people) uses physical actions to bully someone; such as hitting, poking, tripping or pushing and repeatedly and intentionally damaging someone’s belongings. Verbal bullying is the repeated or systematic name calling, insults, homophobic or racist remark and verbal cause. Social bullying is indirect actions, such as lying about someone, spreading rumors, playing a nasty joke that make the person feel humiliated or powerless, and mimicking or deliberately excluding someone. Psychological bullying is threatening, manipulating or stalking someone. And cyber bullying is a method of bullying that uses technology. There are many factors that motivate bullying behavior. Bullies want to feel powerful by insulting or mocking someone. They want to have the attention their families did not give them. They want to be aggressive.

Bullies pick on the people they think don’t fit in, maybe because of how they look, how they act (for example, kids who are shy and withdrawn), their race or religion, or because the bullies think their target may be gay or lesbian. The bullies also have psychological problem of their own. They don’t bully other person just to act cool. They were attention seeking individuals who wanted to be noticed and to be noted as superior in their community. One of the most painful aspects of bullying is that it is relentless. Most people can take one episode of teasing or name calling or being shunned at the mall. However, when it goes on and on, bullying can put a person in a state of constant fear. Studies show that people who are abused by their peers are at risk for mental health problems, such as low self-esteem, stress, depression, or anxiety. They may also think about suicide more. There are many ways to overcome bullying.

1. Practice confidence. Practice ways to respond to the bully verbally or through your behavior. Practice feeling good about yourself (even if you have to fake it at first). 2. Ignore the bully and walk away. It’s definitely not a coward’s response — sometimes it can be harder than losing your temper. Bullies thrive on the reaction they get, and if you walk away or ignore hurtful emails or instant messages, you’re telling the bully that you just don’t care. 3. Seek guidance or ask for help when you or someone is bullied. It may help to talk to a guidance counselor, teacher, or friend — anyone who can give you the support you need. Talking can be a good outlet for the fears and frustrations that can build when you’re being bullied. 4. Take charge of your life. You can’t control other people’s actions, but you can stay true to yourself. Think about ways to feel your best — and your strongest.

To sum up everything, bullying is an abuse of your human rights. It is a serious problem with serious mental and physical impacts. It can affect you at home, school, and work, in your social life and in your ability to feel happy, healthy and secure. It is a parasitical exchange, where one person gains a benefit from hurting another. Standing up to bullies doesn’t mean you have to have a physical fight with them. Most of the time, you don’t have to fight. There are almost always more effective ways to deal with bullies — ways that are better for you. Don’t ever forget that everyone has the right to feel safe and happy. Today’s problem isn’t so much the bullying itself – bullying has been around for centuries. The problem is that it is difficult to escape from its cruelty. Despite campaigning, bullying itself won’t become extinct, but the safety felt by victims can be increased. 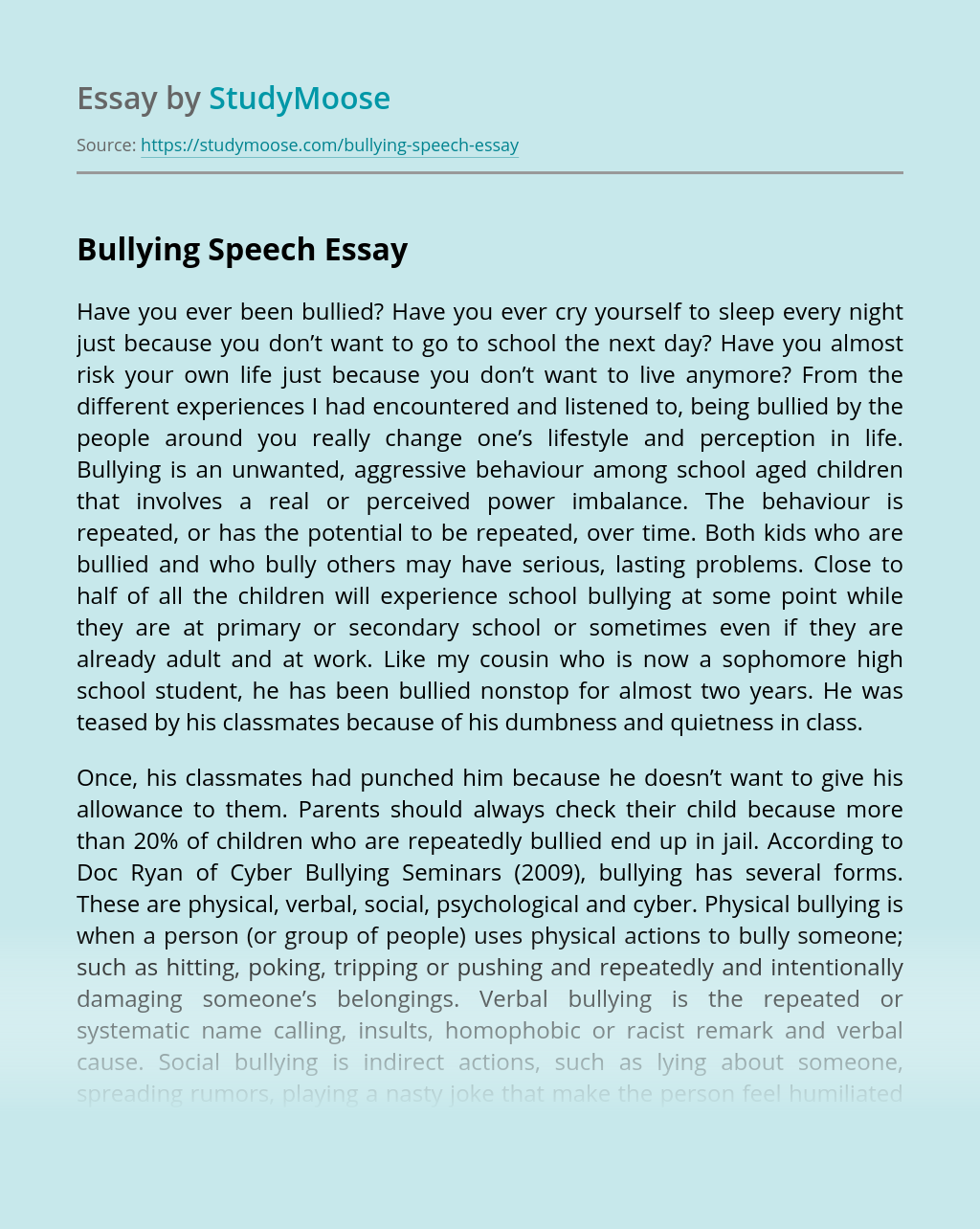 Parents should limit the amount and the content of cartoons their children watch. Cartoons have a lot of negative impact on children because kids are very influential in a young age, watching cartoons that have violent and ill mannered content in it lets the children get exposed to such things at an age where they...

B.F. Skinner, who favored the behaviorist approach to psychology, criticized the psychoanalytical theory by suggesting that psychology should be the study of behavior and not just the mind. However, Skinner’s approach was radical, in that he did consider our inner thoughts and feelings, but denied that they had anything to do with behavior. His study...

View sample
Get Essay
Video Games Should Not Be Banned

Do you remember, when you were a young child, stuff that you would do with your friends together? Or maybe the moment when your parents took you to the nearest park where you could find kids around your age, and you played together? You would play many games with them, hide and seek, -, -,...

The American way of dealing with conflict, according to the article, is arguing. This might not be the best way, and it’s definitely not the only way. The article serves the purpose of exploring the cultural differences in how others deal with conflict. It provides alternatives and different ideas in how to resolve conflicts, as...

The story is told from the perspective of the adult narrator looking back on a key incident from her early childhood in which she and her neighbourhood were threatened by the unpredictable aggression of the local “bogeyman” ironically named Fearless. The first level of conflict in “Fearless” is between the public and Fearless. This arises...