The Buffalo Soldiers National Museum seeks out to achieve its mission through its interpretation, collections, displays and historical artifacts, documents, videos, prints and other historical memorabilia which details the history of the brave men and women who overcame extreme adversity while gallantly fighting the great American wars.

Don't use plagiarized sources. Get your custom essay on
“ Buffalo Soldiers Museum ”
Get custom paper
NEW! smart matching with writer

The museum creates and disseminates knowledge about the history of the Buffalo Soldiers and their service in the defense and development of America.

Captain Paul Matthews is the founder of the Buffalo Soldiers Museum in Houston and he wouldn’t have it any other way. For over 40 years, he has brought in artifacts from firearms to photos.

They fill every nook and cranny of the 3,500 square-foot building on South more in the Museum District. It is to date, one of the best known museums in Houston. As I went in the tour of the Buffalo Soldiers Museum, I was very inexperienced with their history. But as I walked out I feel I had acquired more knowledge of the soldiers than I could imagine, through the tour of the museum and the video I watched.

To begin, I learned that African Americans have served in every war in America.

But in 1866, Congress wanted to make six all African American Troops. The units began as the 9th and 10th cavalry as well as the 38th, 39th, 40th, and 41st infantry regiments. The four infantry regiments were than broken down to form the 24th and 25th infantry regiments. These men represented the first Black professional soldiers in a peacetime army. The recruits came from varied backgrounds including former slaves and veterans from service in the Civil War.

Their officers were white, except for five men, West Point graduates Henry Flipper (1877), John Alexander (1887) and Charles Young (1889), and two former enlisted men, Benjamin O. Davis and John E. Green, commissioned at the turn of the twentieth century. Davis became the first black general officer. The term Buffalo Soldiers was a mere nickname for the units. Though African Americans have fought in various military conflicts since the colonial days, they did not receive the nickname of “Buffalo Soldiers” until they began to battle Cheyenne warriors n 1867.

The origin of their nickname “Buffalo Soldiers” has been a matter of much debate. Among the most known and accepted assertions are that the nickname was given out of respect for the fierce fighting ability of the cavalry. Others assert that Native American Indians gave them this nickname because of the soldier’s dark and curly hair which looked like a bison or buffalo’s coat. Wherever the term may have originated, the nickname “Buffalo Soldier” became a generic term for all African American Soldiers. 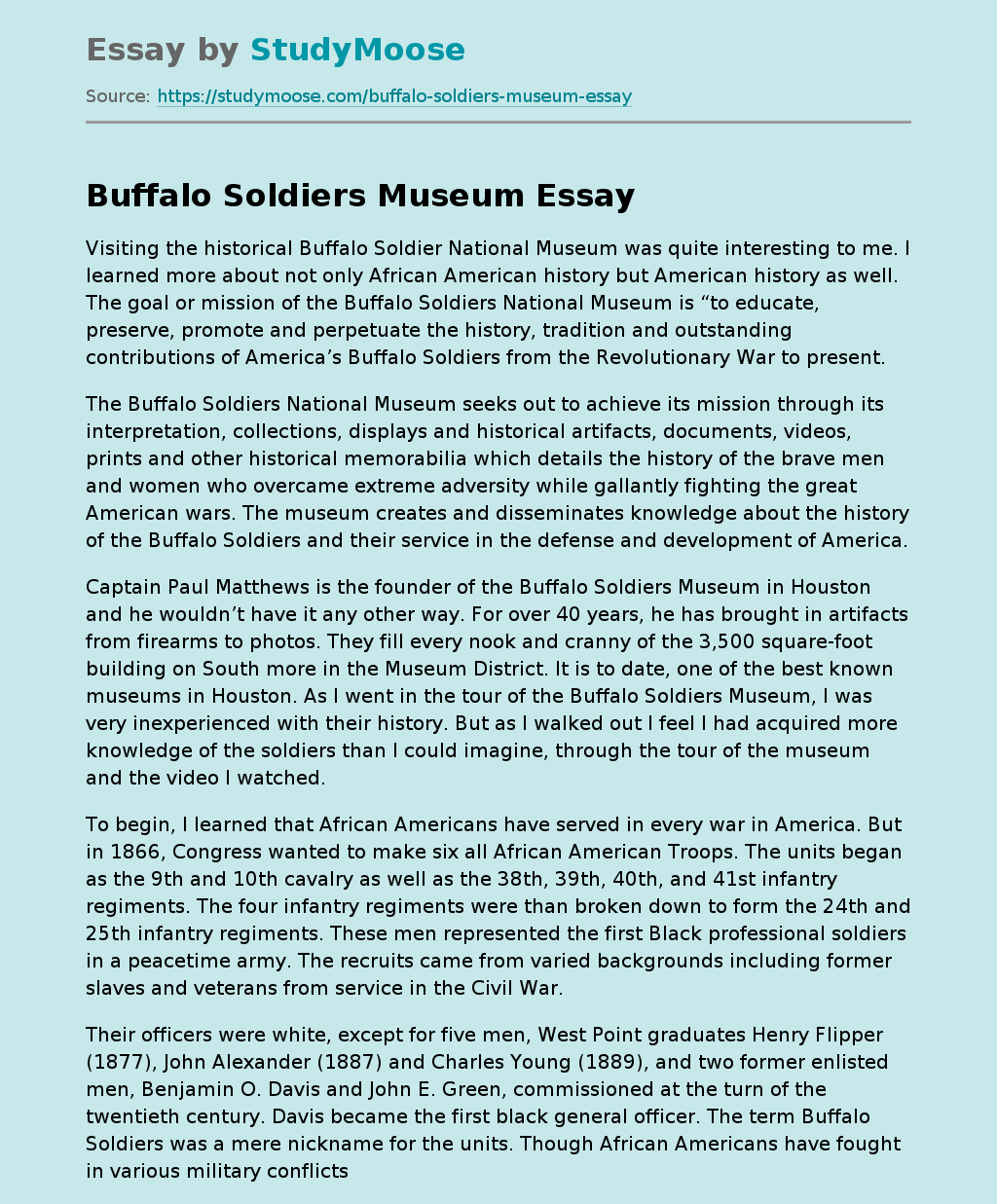