Two of the most earliest religions are Buddhism and Judaism. Buddhism and Judaism were started in different years and places and also have different beliefs. Buddhism was started in 560 B.C.E, in Nepal by Siddhartha Gautama who later came to be known as the “Buddha”, or the “Awakened one.” Buddhism doesn’t believe in a God and are just followers of Siddhartha Gautama. Siddhartha got his followers from his father’s kingdom and later called the religion Buddhism. A growing number of schools of philosophy taught this new way of thinking.

Don't use plagiarized sources.
Get Your Custom Essay on Buddhism vs. Judaism Just from $13,9/Page

Buddha went around India spreading Buddhism and his followers followed his lead and spread the word of religion too. Buddhism is spread by word of mouth, personal contact with a person who practices the religion, not TV commercials, or newspaper ads, or the internet. Buddhism is a focuse on a philosophy of life.

The word Buddha means The Enlightened One. In Buddhism they’re reborn from a previous life until they reach the state of nirvana which is the extinction of all desire and release from suffering.

A person practicing the Buddhist religion is striving to bring forth his or her Buddha nature so that he or she will always be in that world. Once a person is Enlightened or a Buddha, then they strive to bring as many other people to that state as possible through whatever peaceful means they can with wisdom and forethought. Being enlightened is supposed to be a very peaceful state of mind to be in.

Although persecutions can be great when a person becomes a Buddha because beginning a Buddhist practice is easy, but continuing is difficult. If you’re successfully practicing devils and demons will try to knock you off of your path, this is how you will know you’re practicing the religion correctly. On the other hand Judaism was started in 2000 B.C.E, led by Abraham in the Mesopotamian region. Judaism believed in a God named Yahweh and their holy book the Torah. The main difference is that Judaism is a strictly monotheistic faith meaning the belief in only one God. 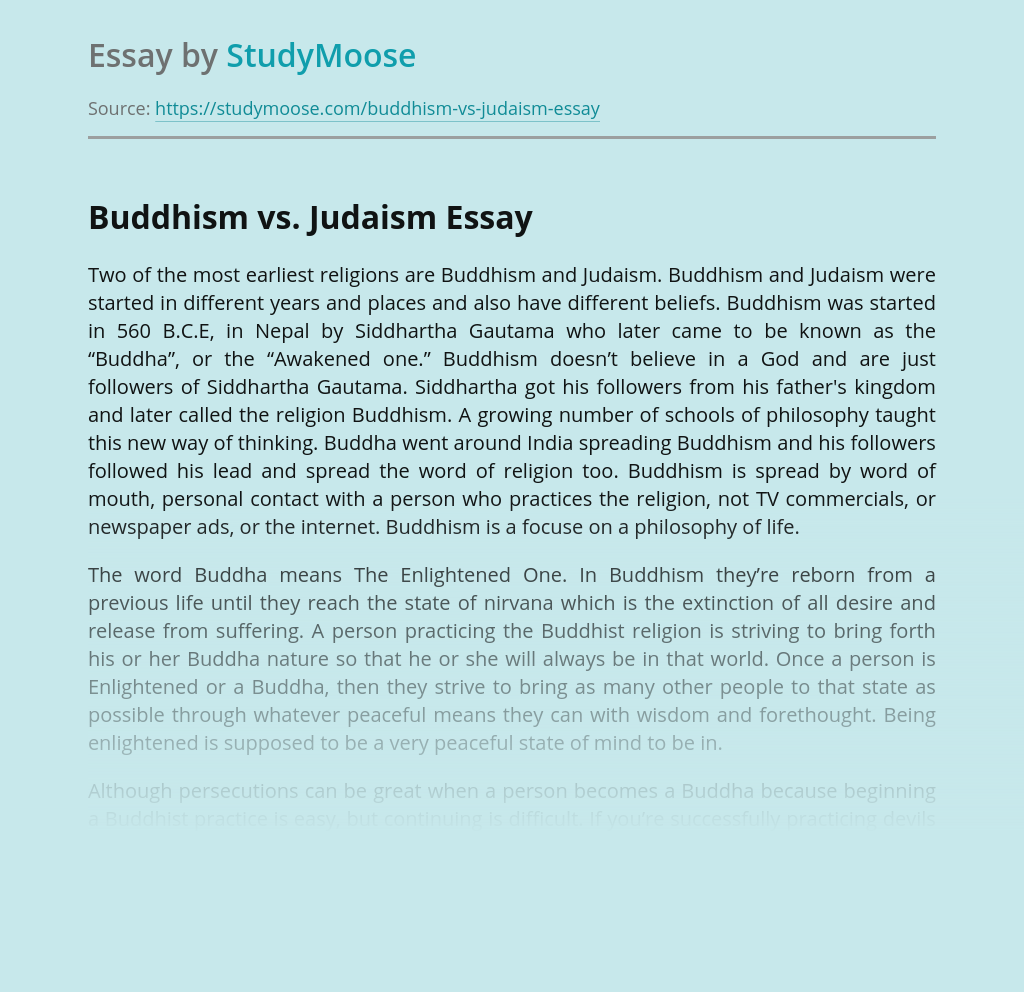 October 3, 2011 Buddhism- Critical Thinking Paper Part One: Origin Buddhism was founded by Prince Siddhartha Gautama. His father the king kept him sheltered from the world. He never witnessed sadness, hungry, pain, or the aging. On four occasions he had visions of people sick, hungry and dying. After having the visions he left his...

Notes on History of Dhammapada

According to Wikipedia, Dhammapada is the most famous book of the Tipitakas. It is also the book that has been translated into English and other languages more times than any other book in Buddhist literature. According to Ven. K Sri Dhammananda (1988), the founder of Sudharma Buddhist Institute, Dhammapada (literally meaning The Words of Truth...

Get Essay
Spread of Buddhism in China DBQ

From the Han dynasty to the Song Dynasty, there were a number of various views of Buddhism in China. You can see the different reactions through the documents provided revealing that there are those that oppose it, those that accept it, and those that believe in spiritual purism. From the 1st century to the 9th...

Spread of Christianity, Buddhism and Islam

New beliefs and practices were introduced to a wide variety of people by the spread of Christianity, Buddhism and Islam. Diverse people were integrated through a common bond with Christianity, Buddhism and Islam being the influential and spreading across the frontiers and borders of Afro-Eurasia to Middle East. The conversion to any of the three...