In Act II, Scene II, the Duchess of York and Elizabeth mourn the death of King Edward and there is a discussion over how and when Edward, Prince of Wales, is to be brought to London to be crowned king. The plot develops little in this scene and Hastings only makes a brief appearance. In this fleeting semblance, Hastings only says ‘And so say I’ (2.2 line 140), with which he is agreeing to Richard’s and Buckingham’s plan to fetch the soon-to-be King, Prince Edward.

Don't use plagiarized sources. Get your custom essay on
“ Buckingham’s plan ”
Get custom paper
NEW! smart matching with writer

This plan is that only Buckingham and Richard are to meet the Prince alone when he arrives in London, Buckingham arguing this point shrewdly by claiming that the Prince should be met by a small troop of attendants, so not to upset too many people. When Rivers becomes suspicious and questions this motive, Buckingham fights back, and almost pressurises Rivers into agreeing with him, and ends with it being agreed that he and Richard should be those to go to Ludlow.

When Buckingham is alone with Richard it becomes clear that Buckingham is in Richard’s confidence, with which their friendship will come into play later on when setting up Hastings, and that the two are plotting to ‘Part the Queen’s proud kindred from the Prince’ (2.2.line150)

All Hastings does in this scene is agree with the majority, and so not much empathy is therefore inflicted toward him as he seems to be playing up to Richard and Buckingham, so to be approved by Richard.

We, as the audience, are those that can see all that Hastings is doing is getting more and more tangled up in Richard’s web, rather than impress him, which is what he is attempting to achieve.

Buckingham: “Now, my Lord, what shall we do if we perceive Lord Hastings will not yield to our complots?” Richard: “Chop off his head – something he will determine. And, look when I am King, claim thou of me The earldom of Hereford and all of the movables Whereof the King my brother was possess’d”‘ By using Catesby, who professes to be a dear friend of Hastings, it seems appropriate that the two schemers use him as a double agent. Buckingham’s self confidence is misplaced – Richard startling words confirm his brutal control of events when Buckingham ponders on how they should deal with Hastings if he refuses to support their plan

Act III, Scene II opens with a scene of urgency as a messenger from Lord Stanley knocks on Hastings door at four o’clock in the morning. This time seems to set a sense of indigence amongst the characters. The messenger has come to report the portentous dream that his master has had, believing that Richard is treacherous and means to harm both Hastings and Stanley. He tells Hastings of the dream, claiming that a boar, the boar is Richard’s emblem, will cut off Hastings head ‘he dreamt that the boar had razed off his helm.’ (3.2.line 11). Hastings dismisses the dream, telling the messenger that they should proceed to the tower where they will take part in a council meeting. No sympathy is projected onto Hastings as he mocks Stanley’s dream, claiming that the dream is groundless, without motive and says ‘I wonder he’s so simple To trust the mock’ry of unquiet slumbers’ (3.2.line 26-7).

The messenger exits and Catesby then arrives to discover whether Hastings will support Richards bid for the throne. Catesby informs Hastings enemies, Queen Elizabeth’s relatives, are to be executed at Pomfret castle of which Hastings is glad to hear. When telling Hastings of the news, he says that there is great turbulence and will continue to be until Richard comes to the throne. Hastings says that he would have his head chopped off before he sees Richard succeed to the throne. This is all the information that Catesby needs. It is ironic that Hastings is pleased to hear of the execution of Rivers, Vaughan and Grey after being asked what he felt if Richard were to become king – does he not see the danger that he is in?

His logic seems foolish as he nonchalantly believes that ‘the boar will use’ him ‘kindly’ (3.2.line 32) even though he rashly comments that he believes the crown would be ‘foul misplac’d’ (3.2.line 43) on Richards head. Catesby then comments that ‘Tis a foul thing to die, my gracious Lord, When me are unprepar’d and look not for it’ (3.2.line 62-3), where he is warning Hastings but Hastings seemingly does not understand – he misses the irony in Catesby’s prophetic words.

He ignores Stanley’s further warning when Stanley arrives at his home shortly after his messenger, and states to Stanley ‘Think you, but I know our state secure, I would be so triumphant as I am?’ (3.2.line 80-1). He claims that did Stanley think he would be so confident if he didn’t know that he were safe? Hastings continues to ignore threats, including Buckingham’s veiled warning later on in the scene. Catesby and Buckingham seal Hastings fate and foreshadow his end.

Little sympathy is cast upon Hastings in this scene due to his arrogance towards Stanley’s unknown premonition, appearing overly confident and trusting of Richard. The audience now learns of how nave and gullible Hastings is, and due to his sheer stupidity, he is to be executed. When he is asked of his opinion about Richard becoming king, he doesn’t take time to think and answers brashly, including a pun saying that he would rather have his own head chopped off rather than seeing the crown so offensively mislaid. In this answer, he shows his loyalty to the late King Edward, and so due to his sheer simple-mindedness the audience sympathises with Hastings fate, but still believes he was too trusting in his relationship with Richard and so became arrogant.

Act III, Scene IV opens with a council meeting, and Hastings asking when the new King shall be crowned. Due to his senseless confidence of Richard loving him, he speaks on Richard’s behalf. When Richard arrives, he seems relaxed and unusually friendly, asking the Bishop of Ely to send him some of his strawberries from his garden. It quickly becomes apparent that these are diversionary tactics, prepared beforehand.

Richard takes Buckingham to the side to discuss Hastings fate and how they shall set him up, while the council continues to discuss the coronation. When Richard returns, his tone has blatantly changed, he is angry and accuses Queen Elizabeth and Mistress Shore, Hastings’ lover, of using witchcraft against him. Hastings foolishly questions this statement and is cut off by Richard and is accused of treason. Richard commands Lovell and Ratcliffe to execute Hastings immediately. This short but dramatic scene shows Richard’s power and affect on people, displaying his austere rising to the throne. Empathy is greatly cast upon Hastings in this scene as he was clearly set up. Whatever he had said, Richard would have twisted it to make it look treacherous and so it was a hopeless cause. Hastings was unfairly deceived and fell into the trap of trusting Richard.

After Richards exit, Hastings makes his speech on his downfall and how he could have prevented it to Ratcliffe and Lovell. After being accused of treason and sent to be executed, he realises that he was too trusting. He claims of grief for England but not for himself as he realises that he could have prevented his execution by not believing that Richard genuinely loved him. He recalls Stanley’s premonition and cries over how he scorned it, and laughs at the irony that he was glad of his enemies deaths at Pomfret which took place earlier that day, and now it is he who is next in line to be beheaded. He then remembers Margaret’s curse and cries ‘O Margaret, Margaret, now thy heavy curse Is lighted on poor Hastings’ wretched head’ (3.4.line 91-2).

Hastings destruction is dwelt on in a very focused way during this act – similar to Richard’s other victims, he realises the truth too late and can only make wise prophecies about the future when he is close to death. Richard’s inquiry for strawberries when he enters seems laughably insignificant, but the audience recognises his methods of manipulation and he is lulling the council into a false sense of security. The fact that he succeeds in accomplishing Hastings execution displays his growing power, as does the swiftness of Hastings’ downfall, and therefore great sympathy is inflicted towards the helpless Hastings.

A foolish man, Hastings believed that he could choose not to support Richard and still keep his head. Unlike Richard’s other adversaries, he doesn’t curse, distrust or dislike the Protector, but he doesn’t have the political wit to protect himself by supporting Richard’s idea of becoming king. He was blind and complacent, believing that Richard ‘love’s me well’ up to the moment when he was accused of treason. Similar to Anne, he chose to misinterpret the usurper’s words, paying the price with his life, Hastings should have heeded the warnings offered to him. It is ironic that Hastings, a naï¿½ve and subtle man, should share the fate of execution, like other male victims in the play, simply because he failed to say what Richard wanted to hear. 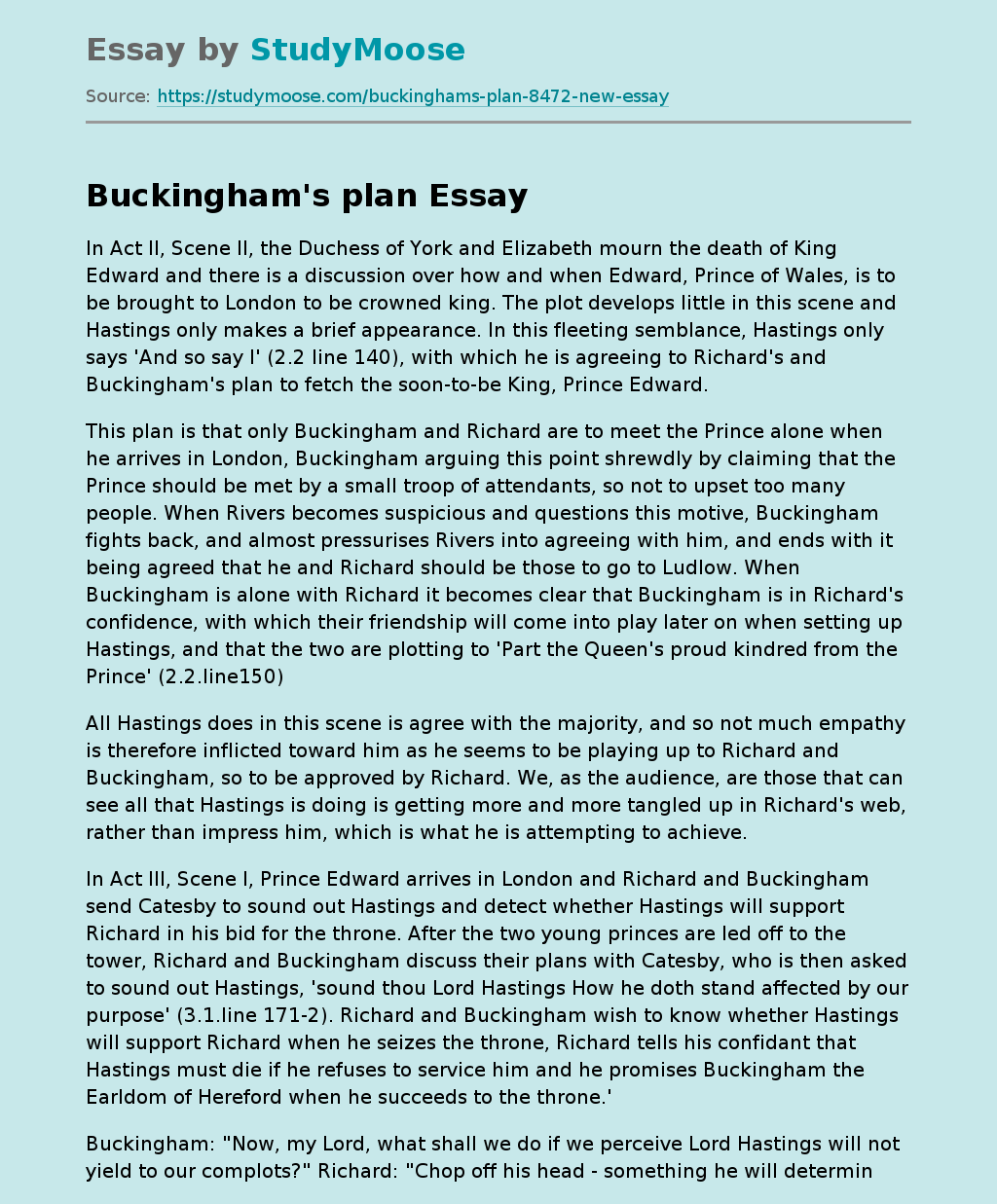