In this assignment I will describe the type of business, purpose and ownership of two contrasting organisations. My two chosen contrasting businesses are ASDA and Oxfam.

ASDA is a British supermarket chain which retails food, clothing by George, toys , car wash and general merchandise such as electrical products and cooking appliances. ASDA also have branched out into telecommunications with a mobile network called ASDA mobile. ASDA is Wal-Mart’s largest non-U.S. subsidiary, accounting for almost half of the company’s international sales, in this sense ASDA can be classed as a National business as it can be found all over the country or an International business as it is a part of the Wal-Mart Conglomerate which can be found in America and Canada.

Founded as Hindell’s Dairies in 1920 by a group of Yorkshire farmers to protect their incomes due to the decline after World War 1. After a sucessful period which saw them expand and diversify the company was floated in 1949 becoming Associated Dairies and farm Stores Ltd.

In 1968 Associated Dairies bought out the Asquith Brothers stores and became the company we know today as ASDA (ASquith + DAiries).

They are currently the 2nd largest chain in the UK. ASDA is what is known as a Ltd Company which means it is a private limited company, a Ltd is owned by family or friends and are quite often larger in size than a sole trader or partnership company. Being a Ltd company gives the owner(s) much more control over decisions and the directions in which the company is going, though you are answerable to shareholders they will be friends and family as they are unable to sell any stock shares on the London Stock Market. From this we can ascertain that it is a profit based company which means it is not under governmental control and run by individuals for purely profit making purposed.

Oxfam is a charity organisation that works for no money. Oxfam was originally founded in Oxford, UK, in 1942 as the Oxford Committee for Famine Relief by a group of Quakers, social activists, and Oxford academics; this is now Oxfam Great Britain, still based in Oxford, UK. It was one of several local committees formed in support of the National Famine Relief Committee. Their mission was to persuade the British government to allow food relief through the Allied blockade for the starving citizens of Axis-occupied Greece. The first overseas Oxfam was founded in Canada in 1963. The organization changed its name to its telegraph address, OXFAM, in 1965. Oxfam falls into the voluntary sector. The voluntary sector consists of self-governing organisations some being registered charities some incorporated non-profit organisations. Voluntary sector work includes things like delivering services, Community and economic development and also advancing in religious faith.

Oxfam is an international organisation meaning it spreads across the world. Oxfam is an international confederation of 15 organisations working in more than 90 countries worldwide to find lasting solutions to poverty and related injustice around the world. In all Oxfam’s actions, the ultimate goal is to enable people to exercise their rights and manage their own lives. Oxfam works directly with communities and seeks to influence the powerful to ensure that poor people can improve their lives and livelihoods and have their say.

A contrast to either Ltd (private limited company) or the voluntary sector you can also have a business which is known as a PLC; this stands for Public Limited Company. This means that not only do you need a capitol of £50,000 to start the business up there will be share holders who can have just bought shares on the London Stock Market and can put pressure on the company to make a higher profit so the value of their shares increases, giving less control over the business objectives to the owner(s). In both cases of being a Ltd or a PLC this does offer some benefits to the owner(s) in the way of Limited Liability. This means that even if things go badly for the business and it ends up in debt the business and the owner(s) are classed as legal separate entities, so the debt collectors cannot take any personal money or belongings for the debts owed by the business. 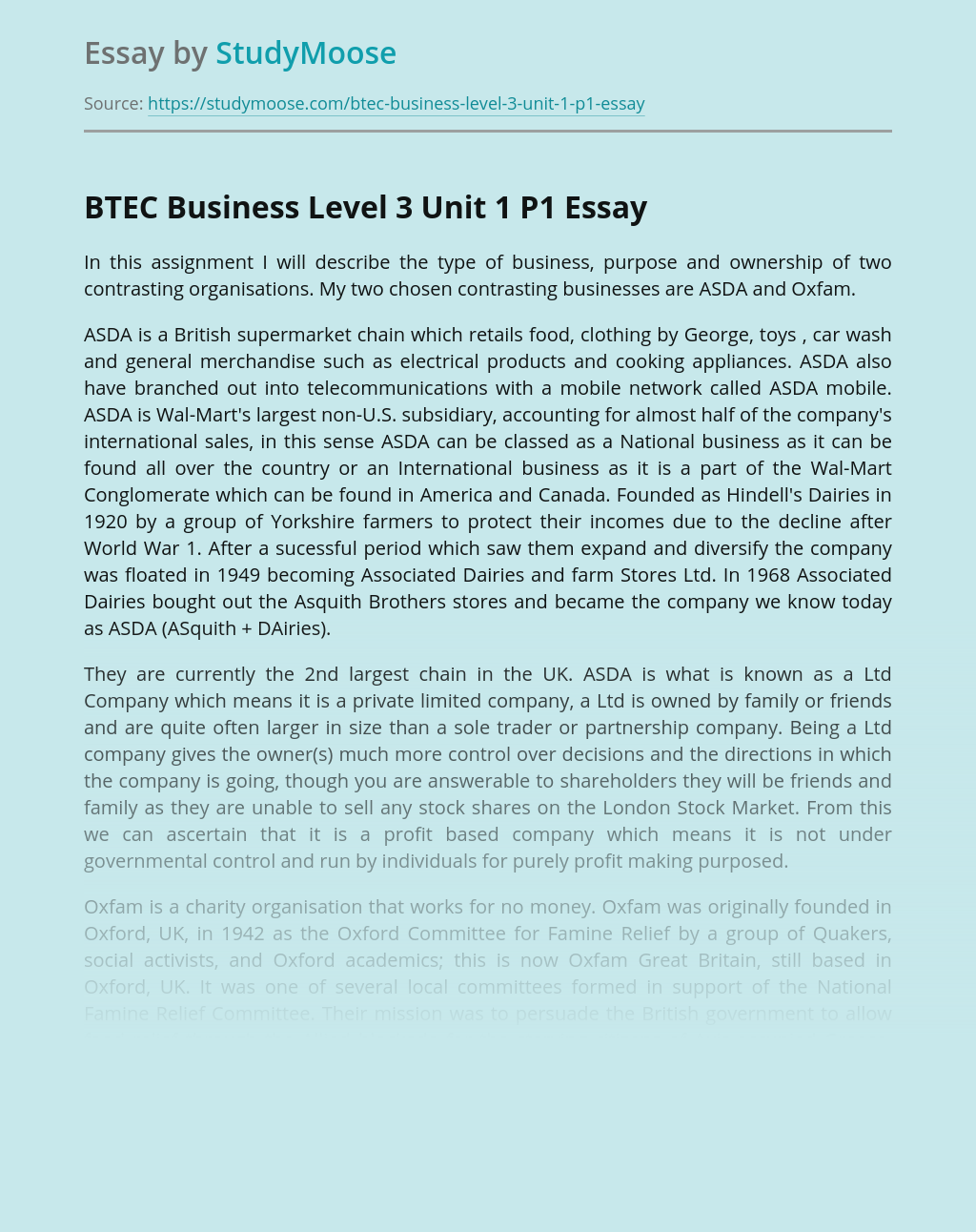 As change happens, we can take the fact that Masters of Business Administration degree is still a constant to embrace. In between the complex setting, a modern manager must still do what managers in every past era had to do in order to become successful. Recently, the once-lonely voices of demur have advanced into choruses...

In September 2006, Alan Mulally had just taken over as the CEO of Ford, the fifth largest corporation in the United States. Ford was in trouble, as was the entire American auto industry, partly due to the rapid increase in average gas prices from $1.10 per gallon for regular, unleaded gasoline in January 2002 to...