Brutus in the play Julius Caesar by Shakespeare

Marcus Brutus is a character in William Shakespeare’s Julius Caesar which is based on the true story of events in Rome more than 2,000 years ago. Caesar’s loyal friend, Portia’s loving husband, and a noble Roman. However, he leads other conspirators and murders Caesar. People often question, is Brutus a hero or a villain? Brutus is not a hero nor a villain because he is not totally bad or good. Brutus doesn’t kill Caesar for power, but the good of Rome.

Don't use plagiarized sources. Get your custom essay on
“ Brutus in the play Julius Caesar by Shakespeare ”
Get custom paper
NEW! smart matching with writer

There is no human that is totally bad or good in story nor real life. Brutus loves Caesar but kills him because he believes that Caesar is not a good leader and that Caesar’s ambitions are dangerous to the future of Rome. The decision to kill Caesar is not easy for Brutus and his wife sees that.

Portia tells Brutus she believes he has “some sick offence within your mind” (II.i.267-270) and that is why he can not sleep. The fact that he can not sleep shows that he is thinking about the murder and not comfortable with it. Also, he will not share his thoughts with his wife, even though she believes that “which by the right and virtue of my place/ I ought to know of”(II.i.267-270).

” (III.ii.26) he means that he believes his actions are for the benefit of the Republic not to improve his position. During Brutus’s speech at Caesar’s funeral, he reveals his motive “I honour him; but, as he was ambitious, I slew him.” (III.ii.26) He tells the Romans they are better with Ceasar dead since if they would “rather Caesar were living and die all slaves, than that Caesar were dead, to live all freemen?” (III.ii.21-24). Brutus believes that Caesar would have turned the freemen of Rome into his slaves and therefore was not the best leader for Rome. Cassius must also convince Brutus that Caesar’s murder is good.

Cassius tells Brutus a story about a day in the winter where they swam in a river and Caesar almost drowns. Cassius uses this story to show Brutus that Caesar is just a man, not worthy of his “name being sounded more than yours?” (I.ii.143) Cassius also tell Brutus that the fault “is not in our stars/ But in ourselves” (I.ii.140-141) which sounds like Brutus has a choice about the future of Rome. Brutus is not a villain because he trusts Antony and refuses to murder him which shows that Brutus isn’t interested in gaining power and he has a good heart.

Brutus believes that “For Antony is but a limb of Caesar. /Let’s be sacrificers, but not butchers”(II.i.165-166) and that without Caesar Anthony is not be a threat. He says, “And for Marc Antony, think not of him,/ For he can do no more than Caesar’s arm/ When Caesar’s head is off”(II.i.180-183). He does not want to murder innocent people, because he believes the “Our course will seem too bloody” (II.i.162). Brutus is a villain because he is overconfident and does not listen to the words of Cassius.

His overconfidence is shown many times. Brutus shows his over confidence when talks about Cicero. On the day Ides of March, Brutus was discussing with other conspirator about if Cicero should go with them. Although other conspirator want Cicero to join them, Brutus don’t agree with that, he said, “O, name him not. Let us not break with him,/For he will never follow anything”(II.i.156-157).

Later, when Cassius is talking about how he fears Antony, Brutus says “And for Mark Antony, think not of him,/For he can do no more than Caesar’s arm/When Caesar’s head is off.”(II.i.188-190). Also he believes that Anthony can speak at the funeral since whatever Antony speaks “I will myself into the pulpit first/ And and show the reason of our Caesar’s death./ What Antony shall speak, I will protest.” (III.i.237-239) and the people will believe him. In conclusion, Brutus is not a hero and not a villain.

He kills his best friend, but it is for the good of Rome. Therefore he is not a villain. He trusts Antony, but that trust is the reason their plans to prevent Rome becoming a republic fails. Therefore he is not a hero. Although Antony calls Brutus “the noblest Roman of them all.”, he is overconfident. And this overconfidence leads to his suicide. Is difficult to say he is a hero or a villain. Because if he change his action, the history will change. Once the history change, our life today will change, too. One thing we learn is, no matter Brutus’s action is good or bad, he try his best and do what he believe is right to make himself and other people a better life.

Brutus in the play Julius Caesar by Shakespeare. (2016, May 10). Retrieved from https://studymoose.com/brutus-in-the-play-julius-caesar-by-shakespeare-essay 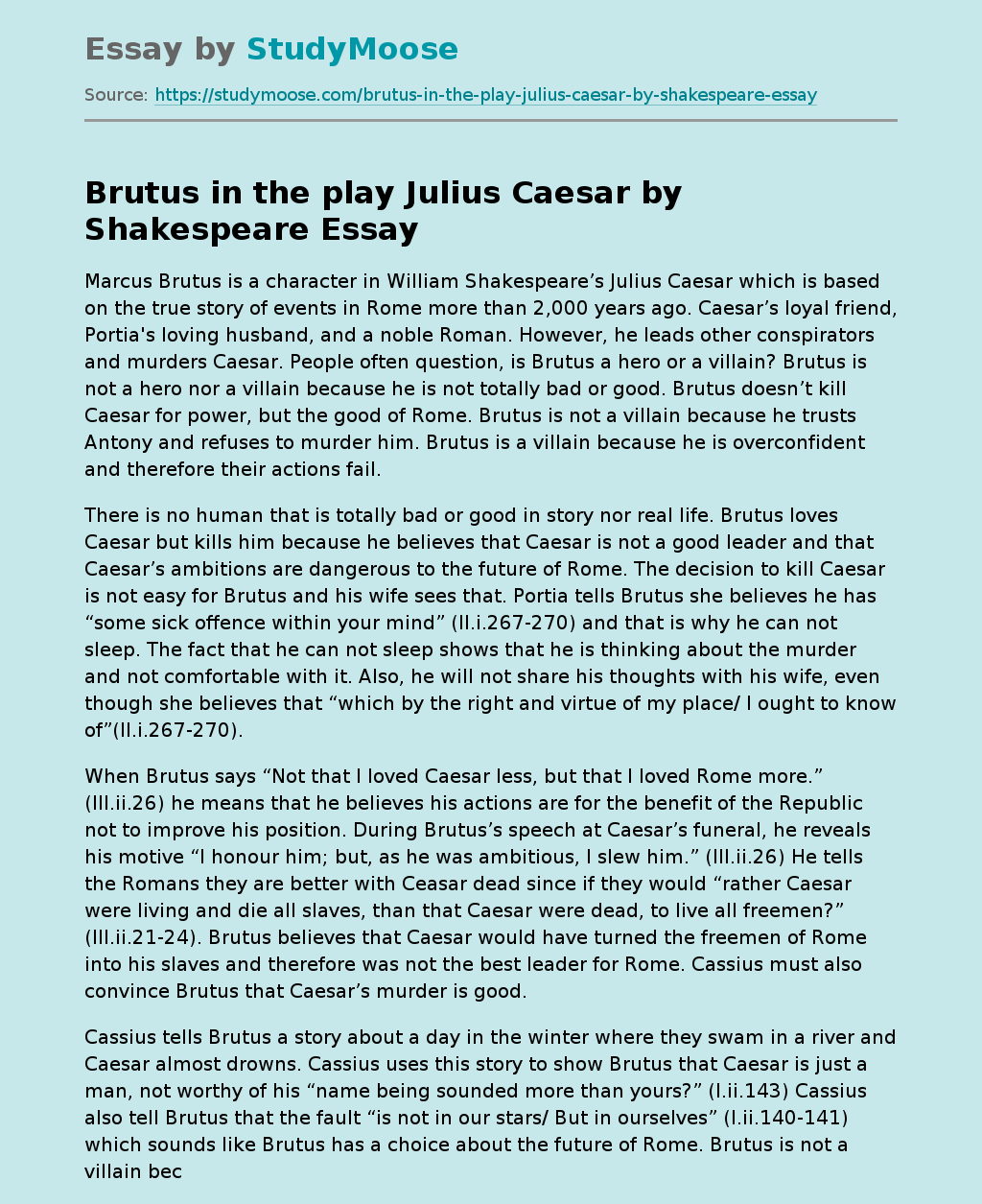