In 1989, CITIES (the Convention on International Trade in Endangered Species of Wild Fauna and Flora) approved a worldwide ban on ivory trade due to extensive poaching reducing the African elephant population by more than half. However, levels of poaching and illegal trade are getting out of control once again. Since 1997, certain countries such as Botswana and Zimbabwe have tried to weaken the ban by allowing the sale of thousands of kilograms of ivory to China and Japan. It was not until 2012 that CITIES recognized that elephant poaching had reached unsustainable levels (Elephants and the ivory trade, 1).

Don't use plagiarized sources. Get your custom essay on
“ Brutality of Hunting Animals and Ivory Trade ”
Get custom paper
NEW! smart matching with writer

The illegal trade of ivory is pushing elephant poaching to the point where elephants are vulnerable to extinction. This terrible, wasteful act of poaching will put many species, as well as our own, at risk and harm the economy unless we take immediate action.

What would happen if elephants became extinct

Elephants play a very important role in maintaining sustainable habitats for many other species (African elephant, 2).

There are certain elephant-dependent tree species in Congo, Africa that have declined in growth population after more than 98% of the forest elephants have been killed by poachers. Forest elephants help these trees by spreading their seeds when they roam, and germinate them with their stomach acids. This dual relationship allows fruit trees with no other dispersal partners to ensure reproduction (Platt, 2). Depletion in these trees will have long-term ecological effects as the loss of one species directly impacts the whole balance of the food web (Bove, 2). If elephants became extinct, the elephant-dependent tree species would no longer continue to grow, causing the herbivores that rely on these trees for food to essentially starve as well as the carnivores that eat these herbivores, eventually affecting all local people who rely on these organisms for food and medicine.

Can elephants be protected in order to save the economy

The demand for ivory is very high. Because of this, the price of ivory has risen causing the amount of poaching to rise as well. It has gotten to the point that the tusks of a single adult elephant can be worth more than 10 times the average annual income in many African countries (Rosen, 1). This is unsustainable for the economy because if we assume that these poachers hunt elephants into extinction, they will no longer have means of making money once the elephants are gone (Planet earth, video). However, if the conservation of elephants were to put money in people’s pockets, then poaching could be stopped. A way to do this would be by the means of tourism; tourists mostly go to Africa to see wildlife, and wherever there are elephants, tourists will go. Tourism brings a lot of money into the economy, and with more money coming from tourism, poaching will become less appealing to those who need money (Johnson, 3).

What needs to be done to stop elephant poaching

Because demands for ivory are so high, measures need to be taken immediately to avert the extinction of African elephants. The only solution to truly protect elephants is to reinstate a total, permanent ban on all ivory sales (Sterling, 1). Other measures that also need to be taken include the application of strong law enforcement on international levels to ensure punishment, and the closing down of national ivory markets (Elephants and the ivory trade, 1).

What is being done now to try and stop elephant poaching

Many elephants are being protected from poachers within national parks to ensure their continuity and survival. Organizations, such as the World Wild Life Fund, try and protect habitats by having anti-poaching patrols surveying areas within elephant ranges (African elephant, 9). There are many African countries that recognize the threat to their elephant populations and want to protect them (Sterling, 2). Among these countries, Kenya plays a major role in trying to convince CITIES to reject any proposals from Tanzania and Zambia to allow them to sell ivory (Elephant voices blog, 7). However, most African countries do not have the power to stop these crimes from being committed without the help of European countries (Sterling, 2). IFAW (the International Fund for Animal Welfare) is urging the European Union to support these countries that are requesting assistance to stop poaching since they have the power to ensure that a ban on all ivory is reinstated (Sterling, 2).

What could be used instead of ivory

Poaching is extremely wasteful. When an elephant is killed, the poachers usually leave it there to rot. Often times, poachers will lay new snares without checking old ones and elephants caught in the old ones are also left to rot. This has lead to many animals, including humans that rely on elephants for food to starve (Poaching in Zimbabwe, 1). Ivory is mainly used in the manufacture of piano and organ keys, and minor objects of decorative value because of its durability (Uses of ivory, 1). Ivory is not a necessity; there are alternatives to the products that we manufacture that don’t require the use of tusks. A good example of this is Ivorite, made from casein (milk protein) and an inorganic hardening compound, which has both the quality and durability of ivory (Rosen, 2). Products like this always have flaws, but there is always room for improvement. In this case, RPIvory, which is an unusual polymer, was created to improve Ivorite, which made the keys less slippery for pianists (Rosen, 2).

Science and technology have improved so much that there is absolutely no more need to keep removing tusks in order to manufacture minor objects that are not essential to humans. Elephant poaching is unsustainable in the sense that it harms other habitats by disrupting their sustainability; it is extremely wasteful because of the fact that only the tusks are being used, and it ruins the African economy. At the rate we’re going today, elephants will become extinct causing many species, as well as our own, to suffer because of our greed. The African economy is so bad that people would risk their own lives to kill an elephant in order to get paid by a supplier, who will then sell it for ten times as much. There are many things that countries and organizations are doing to help elephants, but there are still many things that need to be done.

Ivory is not a necessity; there are other materials that have been created to be similar to ivory that do not require the tusks of an elephant. Nobody in the world needs an elephant tusk but an elephant. If everyone did little things, such as signing a petition to refuse to buy items made from ivory or funding elephant protection, we would still be able to meet our human needs without destroying the sustainability of the environment. Our greedy and selfish acts are making a species vulnerable to extinction; Gandhi stated, “Earth provides enough to satisfy every man’s needs, but not every man’s greed.” (Good reads, 1). 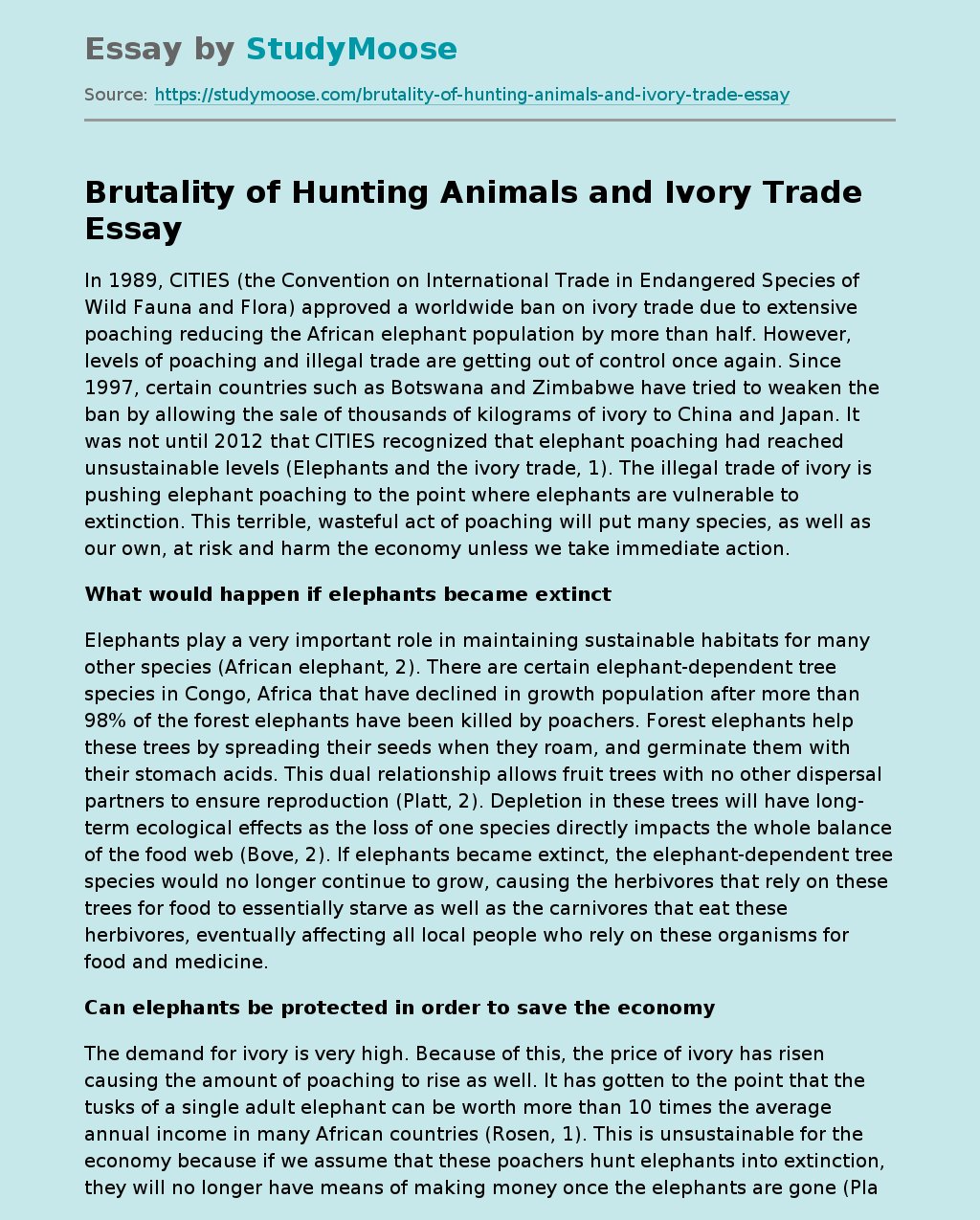