Bruce Dawe is an Australian born poet that lived during the time of the Vietnam War. He lived through a changing time of social unrest, consumerism, and feminism, and it was all reflected in his poetry. His poetry revolves around the opinions of a society that didn’t agree with politics and created their own culture. The Vietnam War was controversial, as many argued involvement was unnecessary. Bruce did not agree with choices made by hierarchy in regards to the War, and expressed his beliefs through writing.

Don't use plagiarized sources.
Get Your Custom Essay on Bruce Dawe “Weapons training” Just from $13,9/Page

Weapons training and homecoming are both poems that argue against the success of the Vietnam war by using strong imagery to bring the readers emotions into play. Bruce Dawes poem ‘Weapons Training’ is a piece written about experiences of the Vietnam War in an interesting and unconventional way.

The poem is written to give the public an idea of what it may be like as a soldier when being addressed to by an instructor.

Rather writing a traditional poem with organised sentences devised with proper punctuation and grammatically correct phrases, he uses a predominant amount of slang to carry the tone of the unmannerly instructor. The way Bruce Dawe has refused the typical way of writing further casts a reflection of society’s behaviour at the time. The poem is an example of a sergeant dressing down a squad of recently enlisted recruits for the Vietnam War. References to “mob of little yellows”, “a pack of Charlies” and “their rotten fish-sauce breath” suggest of in-built war propaganda. 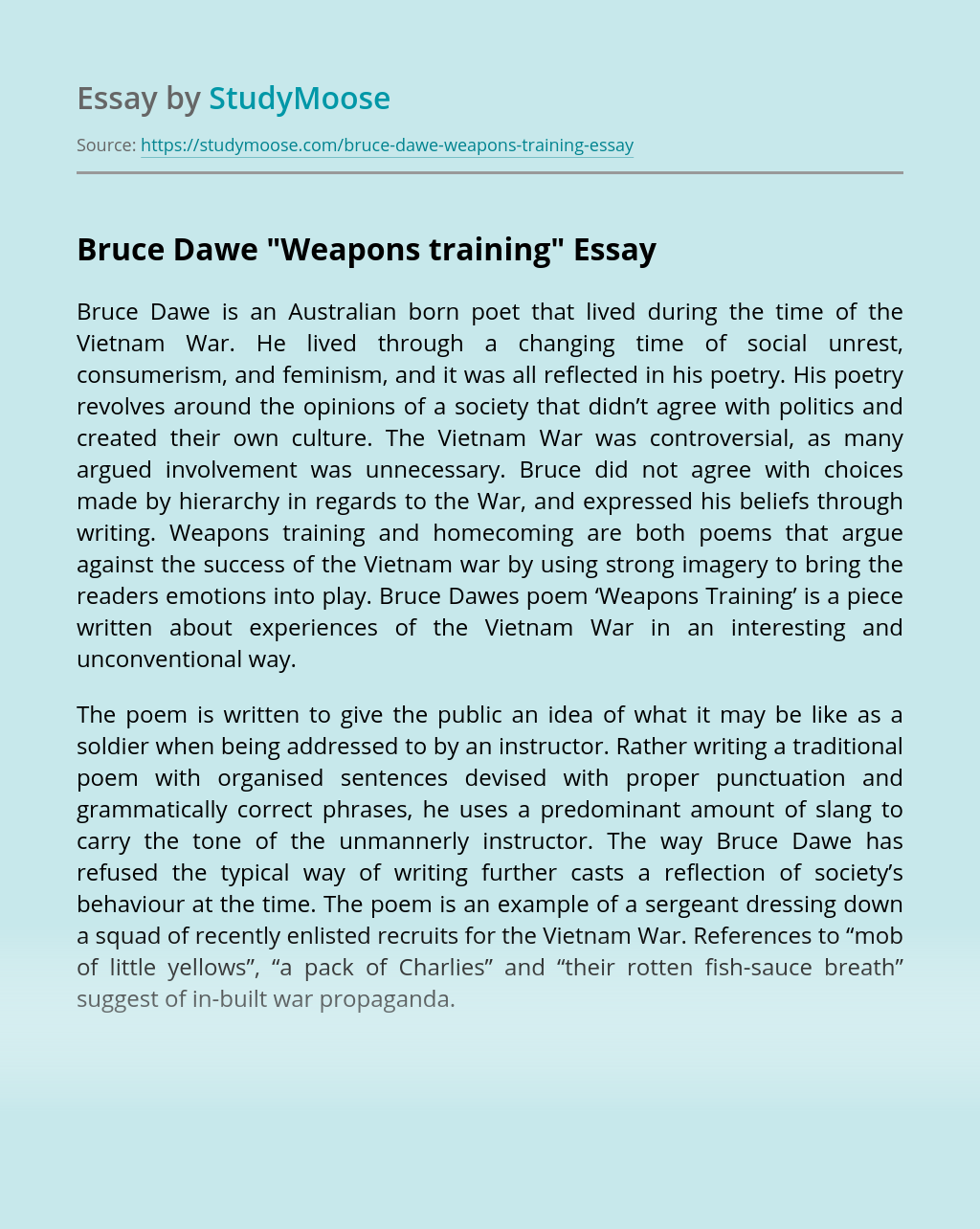 “What’s your name” asked one of two men in camouflage uniforms standing in front of me. “Holtan, Drill Sergeant” I half stuttered. The other man flew into an angry rage and started to scream at me “Soldier, he is not a Drill sergeant, look at him now soldier! What rank is he now that you...

When the Philippine Army (PA) gave me a Masteral Degree Scholarship, I was told to take a Human Resource Management (HRM) course. Considering that I selected to take my graduate course in UP Diliman , I enrolled in the School of Labor and Industrial Relations (SOLAIR) due to the fact that they have a comparable...

View sample
The Charge of the Light Brigade

The 25th October 1854 marked the day of the Battle of Balaclava in the Crimean War plus one of the most famous and ill-fated events in British military history, the so called ‘Charge of the Light Brigade’. Great miscommunication between commanders led to an error in military execution, the Light Brigade were mistakenly ordered to...

The Profession of Arms Campaign is mandated by John M. McHugh, secretary of the Army, and Gen. Martin E. Dempsey, Army chief of staff, to assess the state of the Army and take a critical look at how the past decade of war has impacted the military and civilian workforce. “The overall objective of the...