Most of us used to think that there is just one important difference between British and American culture, that is accent of English language. However, experience of the american exchange students shows that is not true.There are a lot of others cultural, social and economical aspects differing USA and Great Britain, but still they have got some things in common, probably because English culture used to be considered as mother- culture for American. I would like to start with such an interesting and modern cultural aspect as food.

Don't use plagiarized sources. Get your custom essay on
“ British and American Culture ”
Get custom paper
NEW! smart matching with writer

In Great Britain they have got a number of restaurants representing cousins from all parts of the worlds, just like in USA. For example, when you are traveling to New-York, you have a possibility to try Chinese food and by passing few stations by subway, you may have a dinner in Russian restaurant. Also, both countries have a big assortment of goodies at the stores.

Nonetheless, there is a difference between the diets following by citizens of the both countries.

One of the good examples is the breakfast, in England people are eating a lot of proteins such as mushrooms and beens; in contrast, in USA for breakfast people are eating some flakes with milk or juice, or some toasts, pancakes,etc. I suppose we can observe this difference, because people in this countries are living different lifestyles. We can see a good number of social differences between American and English cultures, one of them is sense of humor. English sense of humor was named by american students as “dry”; however I would characterize it as ironic and a bit sarcastic, also I believe that the sense of humor is something personal, than national.

One more important thing is the using of cell phones, british people have got one special habit as talking on cellphone in subways, while American people don’t have it , they are using phone wherever they want.Also, I guess English people are used to talk on cellphone, and American are using messages more, then actually talking on phone. Apparently, there is a huge culture difference in social aspect such, as attitude to history. Americans are looking through history with modern prospective, on the other hand, British people are feeling respectfully for their past, being proud of the rich for events and old history that England has. Obviously, America is much more younger country , than England, therefore they donot have such a long history. American students for time being in England had to point out that living in England is more expansive ,then in America.

I believe , that it has to do with life- level in both countries, it is well known fact that salaries in Great Britain are pretty high. Statistically , the young people over 21 have a sallary around 12$ per hour , while in USA is just 7.25$ per hour, therefore the rent in England is more expensive, then in USA. In conclusion, I would like to say, that students who are going for exchange program, are very good example of how lively culture is, and everyone can notice just these differences which is familiar to himself.All cultures have got differences, and when we are going for living abroad, we are challenging ourself for adaptation foreign culture to our own lifestyle, also I believe that such a unique experience can help us to valuate and appreciate our own cultural aspects. 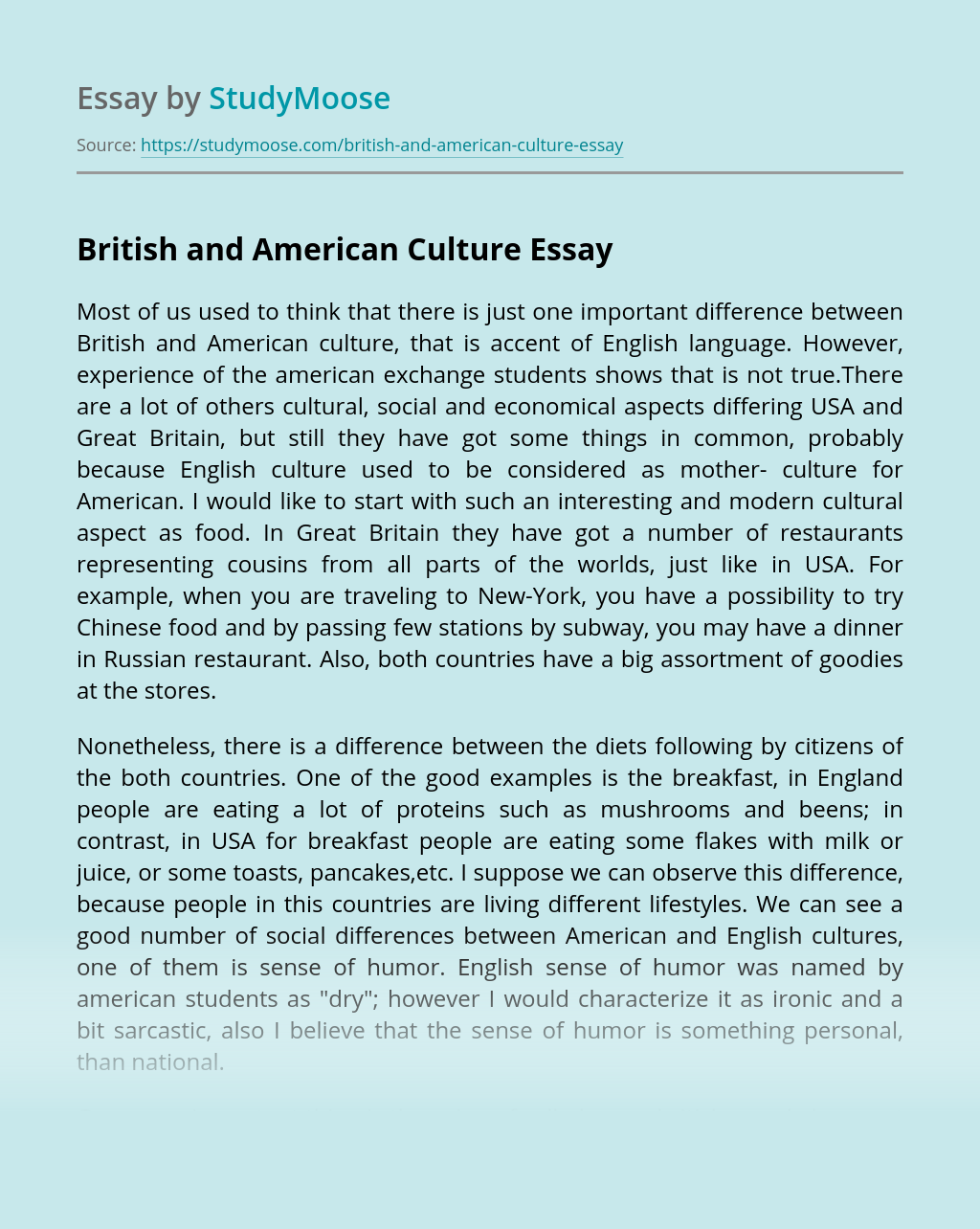