Location: The Brihadeeswara is located in Tanjavur district in Tamilnadu, India. The temple was built on the banks of River Cauvery with its water turned to the moat. The temple, constructed entirely of granite, stands amidst fortified walls. There was no rock formation around this area. It is believed that the rocks would have been brought from a place at least 50kms away. History: The temple had its foundations laid out by the Tamil emperor Arulmozhivarman, popularly called Rajaraja Chola I, in 1002 CE, as the first of the great Tamil Chola building projects.

Don't use plagiarized sources. Get your custom essay on
“ Brihadeeswara Temple – master piece of architecture ”
Get custom paper
NEW! smart matching with writer

It was built to grace the throne of the Chola Empire in compliance of a command given to him in his dream. The scale and grandeur is in the Chola tradition. An axial and symmetrical geometry rules the temple layout. Temples from this period and the following two centuries are an expression of the Chola wealth, power and artistic expertise. The emergence of such features as the multifaceted columns with projecting square capitals signals the arrival of the new Chola style.

The Brihadeeswara Temple was built to be the royal temple to display the emperor’s vision of his power and his relationship to the universal order.

The temple was the site of the major royal ceremonies such as anointing the emperor and linking him with its deity, Shiva, and the daily rituals of the deities were mirrored by those of the king. It is an architectural exemplar showcasing the pure form of the Dravida type of temple architecture and representative of the Chola Empire ideology and the Tamil civilization in Southern India.

The temple “testifies to the brilliant achievements of the Chola in architecture, sculpture, painting and bronze casting. ” Construction:

The wish to build a mammoth temple like this is said to have occurred to Rajaraja while he stayed at Sri Lanka as an emperor. This temple is the first building fully built by granite and finished within 5 years [1004AD – 1009AD]. The solid base of the temple raises about 5 metres (16 feet), above which stone deities and representatives of Shiva dance. The huge kalasam or Vimanam (top portion of the shrine) is believed to weigh 81. 28 tonnes and was raised to its present height by dragging on an inclined plane of 6. 44 km. The big Nandi (bull), weighing about 20 tonnes is made of a single stone and is about 2 m in height, 6 m in length and 2. m in width.

The presiding deity of lingam is 3. 7m tall. The prakaram (outer precincts of the temple) measures 240m by 125m. The outer wall of the upper storey is carved with 81 dance karanas – postures of Bharathanatyam, the classical dance of Tamils. The shrine of Goddess is added by Pandyas during the 13th century; Subramanya Shrine was renovated by Vijayanagara rulers and the Vinayaka shrine was renovated by Maratha rulers. Architecture: The gopuram of the main entrance is 30 m high, so smaller than the vimana. It is unusual in the Dravidian architecture where the gopurams are generally the main towers and taller than the vimana.

A first rectangular surrounding wall, 270 m by 140 m, marks the outer boundary. The main temple is in the center of the spacious quadrangle composed of a sanctuary, a Nandi made of a single stone, a pillared hall and an assembly hall (mandapas), and many sub-shrines. The most important part of the temple is the inner mandapa which is surrounded by massive walls that are divided into levels by sharply cut sculptures and pilasters providing deep bays and recesses. Each side of the sanctuary has a bay emphasizing the principle cult icons.

The karuvarai, a Tamil word meaning the interior of the sanctum sanctorum, is the inner most sanctum and focus of the temple where an image of the primary deity, Shiva, resides. Inside is a huge stone lingam. The word Karuvarai means “womb chamber” from Tamil word karu for foetus. Only priests are allowed to enter this inner-most chamber. In the Dravida style, the Karuvarai takes the form of a miniature vimana with other features exclusive to southern Indian temple architecture such as the inner wall together with the outer wall creating a pradakshina around the garbhagriha for circumambulation (pradakshina).

The entrance is highly decorated. The inside chamber housing the image of the god is the sanctum sanctorum, the garbhagriha. The garbhagriha is square and sits on a plinth, its location calculated to be a point of total equilibrium and harmony as it is representative of a microcosm of the universe. In the center is placed the image of the deity. The royal bathing-hall where Rajaraja the great gave gifts is to the east of the hall of Irumudi-Soran. The circumambulation winds around the massive lingam in the garbhagriha and is repeated in an upper story, presenting the idea that Chola Empire freely offered access to the gods.

The inner mandapa leads out to a rectangular mandapa and then to a twenty-columned porch with three staircases leading down. Sharing the same stone plinth is a small open mandapa dedicated to Nandi, Shiva’s sacred bull mount. Surrounding the main temple are two walled enclosures. The outer wall is high, defining the temple complex area. Here is the massive gopuram or gateway mentioned above. Within this a portico, a barrel vaulted gorpuram with over 400 pillars, is enclosed by a high wall interspersed with huge gopurams axially lined up to the main temple.

Legends: After the death of the patron, Rajaraja Chola I, his son Rajendra I who was a great military leader succeeded him in 1014. During his reign, he extended the territory of already vast Chola Empire up to the banks of the river Ganges in the north and across the ocean. He shifted the capital of the Chola kingdom to Gangaikondacholapuram, about 60km away, and started building a new temple there, as he wanted to build a bigger version of “The Big Temple”. Rajaraja Chola I donated a big amount of money for the maintenance of the Brihadeeswara.

But, Rajendra I had diverted all the money for the construction of his new temple. His decision deprived the Big Temple of royal patronage. However, Rajendra was able to build only a smaller version of the Big Temple, eventually. Furthermore, the Cholas built hundreds of temples along the banks of the River Cauvery, changing its landscape forever. None of the forts and palaces built by the Cholas survives today. But the temples remain and they stand testimony to their achievements. They are also a major tourist attraction for both local and foreign visitors.

Myths: The 60-metre tall Vimana is the tallest in South India. A European-like figure which is carved on the Vimana is believed to be an ancient warning of the arrival of the Europeans. Later investigations by archaeologists proposed that this claim may be a hoax. Features: Another widely held belief is that the shadow of the gopuram (pyramidal tower usually over the gateway of a temple) never falls on the ground. . The temple is said to be made up of about 130,000 tons of granite.

The Kumbam itself, a 60 ton granite stone carved in one piece, on top of the main gopuram is believed to have been taken to the top by creating an inclined slope to the height of 66m to the top of the gopuram. The prevailing belief is that a mud-slope, which starts at about three miles from the temple site, from Thirukoilore (birthplace of Raja raja’s mother) near Sri Virateshvara swamy temple. Elephants might have been used to drag the stone up the slope. This was claimed to be the only part of the gopuram, which does not cast a shadow that fall on the ground, at least not within the temple premises.

Millennium celebrations: Built in the year 1010ce by Rajaraja Chola in Thanjavur, Brihadeeswara Temple popularly known as the ‘Big Temple’ turned 1000 years old in September 2010. To celebrate the 1000th year of the grand structure, the state government and the town held many cultural events. It was to recall the 275th day of his 25th regal year (1010 CE) when Rajaraja Chola (985–1014 CE) handed over a gold-plated kalasam (copper pot or finial) for the final consecration to crown the vimana, the 59. 82-metre tall tower above the sanctum. Latest News:

During the consecration (Kumbhabhishekham) of 1997, 48 people were killed in a fire accident and 86 others injured. The incident occurred hours before the Mahakumbabishekam ceremony. It is believed a fire cracker lit near the temple fell on the yagasala; a temporary structure built to accommodate the ritual ceremonies, and sparked the fire that spread to the thatched roofs. A stampede resulted when the panic-stricken devotees rushed the only entrance to the temple on the eastern side. However, another version claimed the fire was caused by a spark from the electric generator.

Most of the deaths were reported be caused by the inhalation of carbon monoxide and a few due to burn injuries. The Tamil Nadu Government announced a compensation of Rs 100,000 to the families of the deceased and the injured were paid from Rs 10,000 to Rs 50,000 each. Government of India, Mumbai Mint issued Rs. 1000/- coin to commemorate the 1000th year of the temple. And at last the Brihadeeswara is an unbelievable, extraordinary master piece of architecture… actually designed not by Rajaraja, but by Somavarma the temple architect. 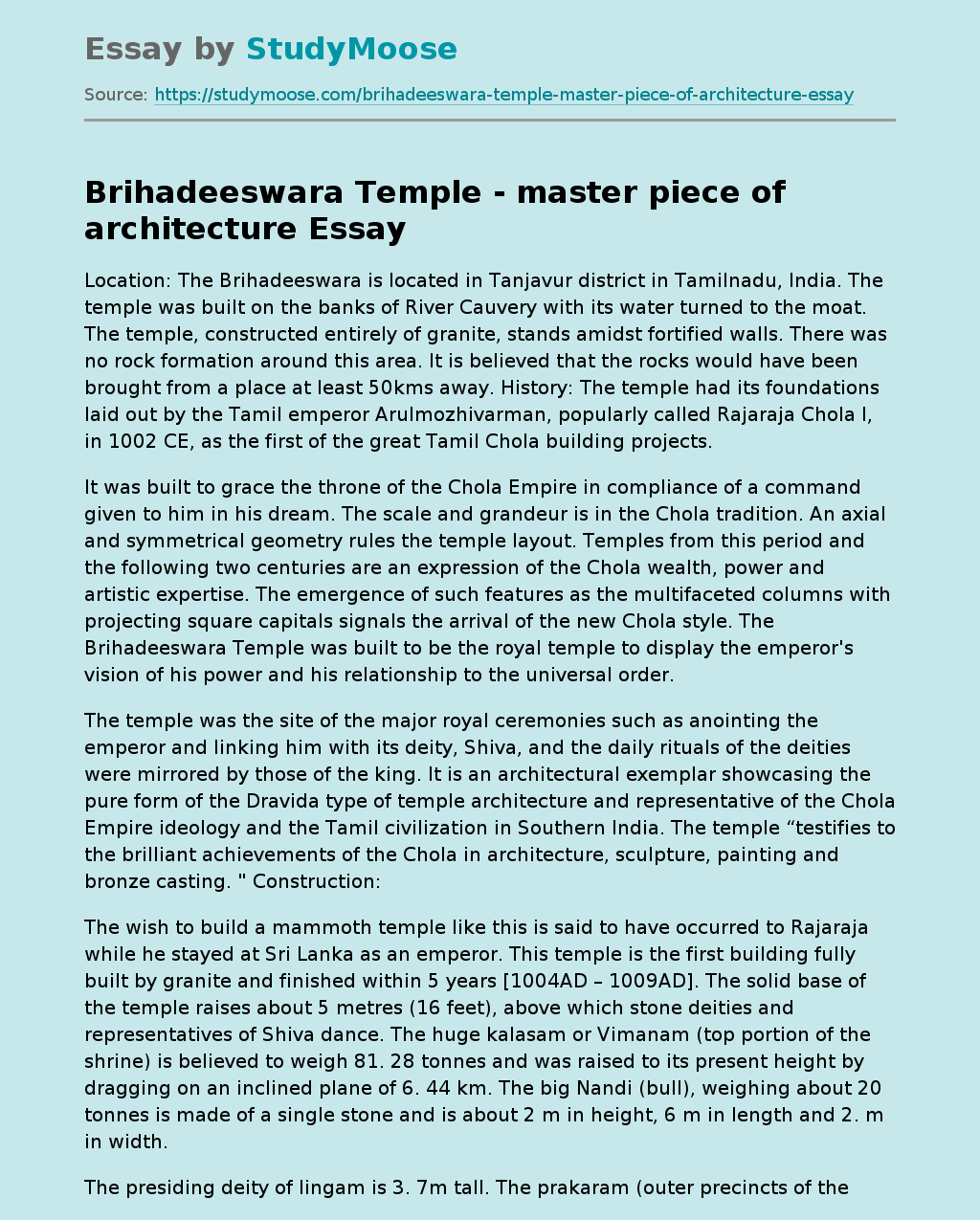