The aim of this essay is to discuss the decision that the protagonist from Richard Wright’s ‘Bright and Morning star’, Aunt Sue, a black mother of two sons, has to make in order to chose between her sons’ life and the safety of the Communist members from her community. This story is, among others written by Richard Wright, a ‘dark portrayal of black Communist life’ and it analyses the inner struggle of Aunt Sue as a black woman and ‘mother of Communists’ (1).

Don't use plagiarized sources. Get your custom essay on
“ Bright and Morning Star by Richard Wright ”
Get custom paper
NEW! smart matching with writer

Wright’s short story follows the dilemma that Sue has to confront with herself during one rainy night, as a mother of Communist sons who were chased by the authorities. Her dilemma starts to grow from the beginning of the story, when she finds out that her son’s communist party was in danger to be discovered by the authorities: ’The sheriff wuz by our house tonight[…] He done got word from somewheres bout tha meetin tomorrow’(Wright 412).

From that moment she was subjected to two different emotions, the fear that she might lose her son and the duty to the community to save the members of the party that her son had:’ She was feeling that Johnny-Boy was already lost to her; she was feeling the pain that would come when she knew it for certain, and she was feeling that she would have to be brave and bear it’, ‘[…] for her to try to stop Johnny-Boy was to admit that all the toil of years meant nothing; and to let him go meant that sometime or other he would be caught.

In facing it this way she felt a little stunned, as though she had come suddenly upon a blank wall in the dark.’(Wright 412-413) In spite of Wright’s joining to Communism: ‘“I Tried to be a Communist’, and of his numerous writings about it, eventually his focus grew more on the development of an individual black consciousness than on advancing the causes of the Communist party as in the case of his two stories ‘Fire and Cloud’ and ‘Bright and Morning star’(2).

From the beginning of the story we can see Sue divided in two inner parts: a part of her still remembering her past beliefs, in Christianity and Jesus, and a new part of her revealed from the moment of her joining her sons’ beliefs in Communism in order to escape of the past sufferings of the black people. In her search for better, as we can see trough the story, she try to find a refuge first in religion, then in Communism, but when she feels that neither the Communism is enough to achieve a better living, her last hope is in her pride of the black people: ‘She was consumed with a bitter pride. There was nothing on this earth, she felt then, that they could not do to her but that she could take’ (Wright 422)

Also we can see Sue taking two different attitudes along the story. If in the first instance we can see Sue as a regular mother concerned for her family and her love for her son, Johnny-Boy: ‘But how she could forget Johnny-Boy out there on those wet fields rounding up white and black Communists for a meeting tomorrow?’ (Wright 408), also we can see that her doubts about her son’s business among the Communist group of her community made her look in a sort skeptical at the policy of allowing people enter the group and at the new white members she didn’t trust: ‘It wuznt nona our folks . . . Ah knows em all from way back.

There ain none of em that coulda! . . . Son, it wuz some of them white folks! (Wright 417), and she is first portrayed as a regular woman who knows her place in the house: ’While shoving the iron a cluster of toiling days returned; days of washing and ironing to feed Johnny-Boy and Sug […] days of carrying a hundred punds of white folks’ clothes upon her head […]’(Wright 409). Her image along with her beliefs changed as the events from that night continued. Her black pride and her commitment to the group emerged when she was brutally questioned about her son and the members from Johnny-Boy’s Communist group, succeeding to resist to their attack on her: ‘yuh didn‟t git whut yuh wanted! N yuh ain gonna nevah git it!’(Wright 423). Though, further in the night, because of weak position she was put into by the beatings of the sheriff and because of the false news that her son was killed, her self-confident fell and she was tricked to say the names of the members.

The moment she decides to rectify her mistake is the moment she realizes that she has to fight alone for her cause and to rescue the other members and she ‘would do anything for her sons – except betray others’ (Felgar 29). Also the moment she lost her last faith – her pride- revealing the names of the members is also the moment she decides to put the good of her people, her friends, above her son and her fears. Thus the only way to take it back was by shooting the boy Booker before he could tell the names:’ The sheet! Thas it, the sheet! Her whole being leaped with will; the long years of her life bent toward a moment of focus a point. Ah kin go wid mah sheet! Ahll be doin what he said! Lawd Gawd in Heaven, Ahma go like a nigger woman wid mah windin sheet and git mah dead son!’(Wright 433). And although she is subjected to the great martyrdom a mother could endure: her son being tortured and killed in front of her, she maintain her strength to accomplish her mission: “She fired, once; then, without pausing, she turned, hearing them yell.

She aimed at Johnny-Boy, but they had their arms around her[…] She glimpsed Booker lying sprawled in the mud, on his face […] And she was suddenly at peace; they were not a white mountain now; they were not pushing her any longer to the edge of life. Its awright…”(Wright 440 ) Main features of the protagonist are coming out in this part of the story: cleverness, the strength of sacrificing her maternal love and her son for the community cause.

She becomes thus the strong, self-confident woman, in order to fix her mistakes and takes the faith of her and her son’s life in her hands and she goes to confront the ‘enemy’ by herself. Because of the wisdom of the past generations she possessed, she succeeds to accomplish her well developed plan: she goes to the enemy camp by herself with a gun hidden in a white sheet in order to shoot the traitor of her friends:’ The sheet! Thas it, the sheet! Her whole being leaped with will; the long years of her life bent toward a moment of focus a point. Ah kin go wid mah sheet! Ahll be doin what he said! Lawd Gawd in Heaven, Ahma go like a nigger woman wid mah windin sheet and git mah dead son!’(Wright 433).

In conclusion, the struggle the protagonist has to take before she could see what her options are and her decision to give her life and her son’s in favor of the Black community, captures a cruel reality, the author wanted to represent, of black women in particular, and the black community in general, in their effort to escape from the hardships the white men had submitted them to. In this way we can say that Sue succeeded to surpass her condition as a black mother and woman, and became a defender of a community, but with a price: stepping over the love of a mother for her son and sacrificing him for the sake of the rest. 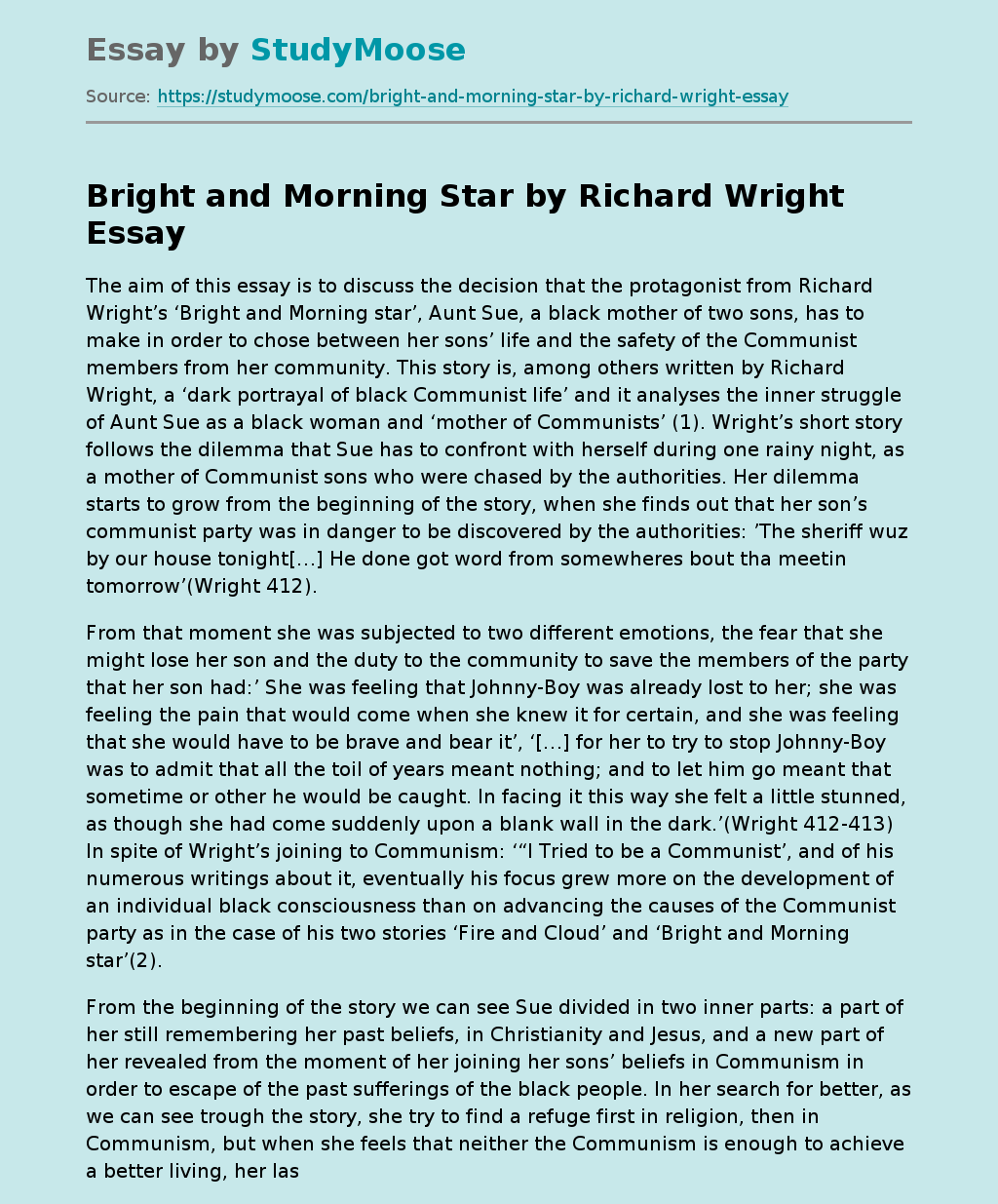