A discussion of the development and use of breast implants

One of the first uses of silicone in a medical implant came in the form of lifesaving tubes implanted into young children to funnel excess fluid from the brain into the chest cavity, where the fluid could be safely metabolized and excreted. Since these “shunts” were first used, in the late 1950s, silicone in various forms has come to be an important part of many implants. “It is used in tracheotomy tubes, in artificial lenses for the eye, in artificial heart valves and in facial implants for birth defects or re-constructive surgery after cancer” (Ames 1).

Don't use plagiarized sources. Get your custom essay on
“ Breast Implants in Plastic Surgery Practice ”
Get custom paper
NEW! smart matching with writer

The early history and use of implants showed no ill effects of the use of paraffin or silicone.

Because of this newly developed surgical process and relatively little use of FDA guidelines there was no comprehensive testing done to ensure the utmost safety of a silicone recipient. By this time the millions of women throughout the world who already had Dow’s silicone prosthesis implanted into their breasts had no idea of the dramatic health risks. Because of these potential health risks, women should avoid the use of breast implants. In 1976, Congress gave the FDA authority to regulate breast implants. By this time breast implants had been in use for a significant amount of time and were considered “grandfathered.

” This means that they were allowed to remain on the market, even though they have not gone through stringent testing.

The FDA felt there was no evidence to substantiate that the implants were harmful. Furthermore Congress also gave the FDA the power to go back and require manufactures to provide proof that the implants were indeed safe and effective, if it was felt that there was a reason to do so. (Bruning 7) “In 1977, Richard Mithoff, a Houston attorney, wins the first lawsuit for a Cleveland woman who claims that her ruptured implants and subsequent operations had caused pain and suffering. She receives a $170,000 settlement from Dow Corning. This case received little publicity” (Frontline 1). Since this case received little attention women from all walks of life still continued to seek out cosmetic surgery.

In 1982 the “FDA proposed to classify silicone breast implants into a Class III category that would require manufacturers to prove their safety in order to keep them on the market” (Frontline 2). It wasn’t until 1990 that heavy media exposure began to unveil the possible links between silicone breast implants and various types of toxic disorders. Connie Chung of Face to Face of this same year confronted Dow Corning executives who vehemently denied any link to toxic disease from their silicone implants (Frontline 2). For better or worse, we live in a society that puts great emphasis on appearance. This preference apparently knows no boundaries. In the 1940’s, “Japanese prostitutes had their breasts injected with substances such as paraffin, sponges and non-medical grade silicone to enlarge their breasts, believing that American servicemen favor women with large breasts” (Frontline 1) this is the case today as-well.

During the 1960’s breast implants made a boom as women discover that there rolls in the job market can be increased by the way they look. With the help of the sexual revolution women also found it pleasing to create a better them through breast enlargement. Not only was there a desire for women to seek this type of elective surgery, but prosthetic medical use for breast implants was increasing dramatically from women suffering from breast cancer. Many women have conflicting images of their breasts. On the one hand, breasts are symbols of beauty, sexuality, and nurturing; on the other, they are troublesome organs that are increasingly likely to threaten women’s lives. In the United States the likelihood that a woman will be found to have breast cancer has slowly and inexorably mounted since the 1930s, when some systematic data collection began.

The increase in diagnoses, already a cause for concern, accelerated in the 1980s, growing by a rate of four percent a year. This year, according to the American Cancer Society, some 184,300 women will discover that they have the disease; another 44,300 will die of it. Of the women in whom cancer is diagnosed, 9,200 will not yet be forty nearly twice the number of women under forty who were found to have breast cancer in 1970. “The disease is now the leading cause of death for American women aged forty to fifty-five, and causes women to lose more years of productive life than any other disease. Numbers like these are why breast cancer is often called an epidemic” (Plotkin 2).

Silicone as a synthetic plastic was first developed in the 1930’s. It contains silicone, a natural material, combined with carbon, hydrogen, and oxygen that have been polymerized, a process in which molecules are combined to form more complex molecules. Silicone can be processed into three forms: a gel, a solid like compound known as elestomer, and a fluid. Early breast implants were made of polyurethane foam, paraffin, steel, and grafts of human tissue. These were not successful and when the first breast implant became available in the 1960’s through Dow Corning, they were held as a breakthrough. Although an improvement, the first silicone implants had problems as well. Gradually the product improved. “With the advent of silicone gel, implants felt softer and looked more natural” (Bruning 6). With the development of the silicone implant there came about several alternatives besides silicone.

These alternatives include gel-filled implants (the most frequent type used), saline-filled implants, and double lumen implants. Some have outer shells that are textured or coated. Since extensive research had been conducted on the development of synthetic implants and cosmetic surgery clinics have become increasingly popular and economically affordable, women have sought out these clinics in droves. This enabled women to feel more confident about themselves and gave them a feeling of higher employability. For example, we see many women in the movie and television industry who have opted for a more well developed breast. These women such as Pamela Anderson Lee, La Toya Jackson, Helen Hunt, Lonnie Anderson and Dollie Parton just to name a few, have had very successful careers not only because of their acting or singing abilities, but because of a better endowed body. On a recent episode of the WB program Judge Judy that aired on November 12, 1996, the former actress known as Roz Kelley of Happy Days fame was contesting a decision of a law suit about her breast implants which she claims has caused Rheumatic disease. Ms. Kelley claimed that her fame was based solely on her appearance and that is the only reason why she decided to get the surgery.

A witness for the defendant was the actress Rhonda Shear of USA’s Up All Night contended that although her implants had helped her career, it was not why she elected to have the surgery. The surgery was done out of personal choice and her statement for the defense was that “all women who have cosmetic surgery, make a conscious choice in doing so.” There was no coercion involved. Not only in Hollywood do we see this type personal enhancement performed, but in magazines, modeling, and in the exotic entertainment industry also.

Why is there such a dramatic emphasis on these women who decide to increase their bust line? That question remains known only to the individual who elects to have the surgery. Because this type of surgery has become so popular, many women in today’s society have elected to have breast augmentation solely for cosmetic purposes. “When the ASPRS (American Society of Plastic and Re-constructive Surgeons) survey asked women why they chose to have breast augmentation, the three most common reasons given were: The desire for a more proportionate build (93%), a more appealing appearance (83%), and a boost in self confidence (76%)” (Bruning 27). The ideal woman started to become taller and thinner. Men desired slim hips and large breasts. This image screams at us day and night on TV, at the movies, in magazines and newspapers, and at the health clubs. Women have fallen into the epitome of “buy this product and you will belong to the club of the attractive and well endowed” (Bruning 27). In September of 1991 the FDA after receiving numerous complaints issued a public report stating that silicone breast implants would not be deemed safe or harmful until further studies could be conducted.

This statement outraged many women who had already began to feel the effects of their implants. “Implants, both ruptured and intact, have been charged with causing a tremendous array of diseases. These range from memory loss to difficulty swallowing to joint pain to decreased sex drive to “skin tightening” to autoimmune diseases and even to cancer. Some have referred to this broad constellation of symptoms as “silicone gel syndrome” (Doyle 1). The first public hint of serious problems did not surface until 1977, when an investigative story of breast enlargement was published by Ms. Magazine contained a revealing article the headline “A 60% Complication Rate for an Operation You Don’t Need” (Bryne 81-82).

After a shocking discovery from investigating Dow Corning’s internal memo’s, thousands of these memo’s revealed lack of long term testing, complaints from doctors, and leakage of silicone from the implants. The most outrageous incident discovered was complaints from surgeons of implants rupturing in the operating room, as they tried to install them into women’s breasts (Byrne 98). Pathology reports indicate considerable silicone reaction to the extruded material can cause severe foreign body reaction in susceptible individuals. A letter written to Dow Corning from Charles A. Vinnick a predominant cosmetic surgeon in California wrote: ” I am loathe to publish my series of cases as I feel that it may open Pandora’s box.

I do feel, however, that rapid dissemination of this information is very necessary to protect your comapny and my colleagues” (Bryne 98). Vinnick complained to Dow about an incident when he removed a pair of silicone implants, the gel in a ruptured implant was terribly runny while the gel inside the other implant was of ideal cohesion. This difference led him and some others to believe that when silicone gel came into contact with tissue fluids and fat the gel’s consistency changed. Several studies were done on various ani 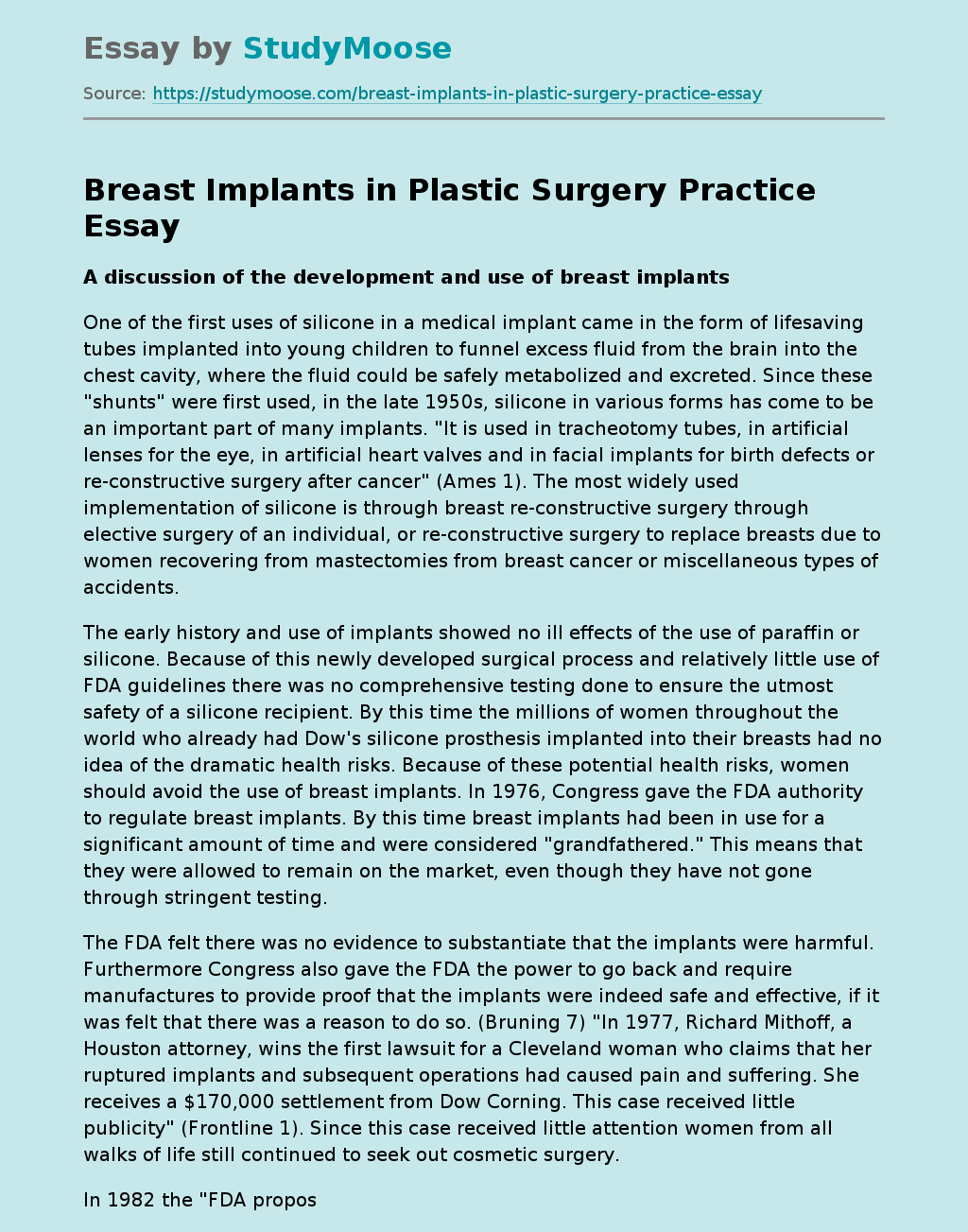