Breaking the Social Norm by Behavior

My social norm was walking on campus backwards for a whole day. This was a major challenge to me because when individuals are not doing the expected in a social environment, I have lots of viewpoints on those specific people. So this was definitely a brand-new experience for me. When I initially understood this was my concept, I was very nervous and distressed. I was so worried about what other students on school would think of me. I had numerous questions going on in my mind.

Don't use plagiarized sources. Get your custom essay on
“ Breaking the Social Norm by Behavior ”
Get custom paper
NEW! smart matching with writer

What were others going to state about me? Would the students make fun of me?

How would I respond if they were to react to my actions? After the very first initial ideas, I became thrilled. I questioned how numerous people would be humored by me strolling backwards to class. I was scared that my observations would alter my point of view on a lot of ideas. I was anxious since I felt like I was not ready to alter my perspective on everything after just one day.

This was a substantial step for me. I understood that I might not be laughing due to the fact that the experiment would then be meaningless. So I collected myself together the night prior to and hoped this significant obstacle would go smoothly.

I woke up like I do every morning knowing that I had to walk on campus backwards for an entire day. I began brushing teeth and washing my face. As I was washing my face, I accidentally put soap in my eyes because I was very nervous about the day.

Afterwards, I got dressed and I started by walking backwards out of my room. Unfortunately, the elevator was broken that day and I had to walk backwards down two flights of steps. As you can imagine, this did not have a great outcome. I missed a step and fell down five steps. I was happy I was not hurt and many people helped me up. Many of the people laughed at me as they were helping me get on my feet. Also, they asked questions such as “Why are you walking backwards?”, “Are you okay?” Did you know walk backwards on steps you will end up falling?” ,and “Are you slow?”

These questions affected me in a huge way because it not only hurt my feelings but I knew that my day was just getting started. My next big step was walking across the crosswalk on West 4th street on campus. As I began walking backwards, many people in their cars had funny looks on their faces and began to make weird gestures. For example, their gestures were putting their hands up in the air, hanging their head out the window, and waving me down with their hands out of the window. Many cars honked at me because I walked slowly in order not to fall again.

He asked me, “what caused you to begin walking backwards?” I said, “I am doing an assignment for Sociology.” He said, “Well, I hope you do well on it. It seems like you will.” As the day ended, I was walking back across West 4th street and a car was waiting for me to finish crossing the crosswalk. As I was walking, the person got out of the car and asked me, “What are you an idiot? I am trying to drive here!” I was appalled at how he approached me as well as scared for my life. I politely continued walking and did not respond.

My experience with sanctions came from a negative stand point as well as a positive one. In reality, not doing that is not the norm is bound to be looked at negatively. According to “The Real World: An Introduction to Sociology”, in Cultural Crossroads it discusses sanctions through a positive standpoint as well as a negative one. I was criticized, embarrassed, and frowned upon. I felt that my behavior during that day did not violate any rules. But, as I analyzed everything that occurred to me on that day it felt as though I committed a crime. This experience taught me a lot about confirming to societal norms as well as the process of socialization. There are no manuals and/or no particular procedures on how to walk class. Yet, if I walk backwards to class there are prescribed negative sanctions for that particular behavior. Our conscience has all the control on what is normal and what is not. If everyone is not doing the same as the others, it is negatively looked upon and there are consequences to those actions.

When I was walking backwards across the street, the man got out of the car yelled at me and told me I was an idiot. Why did he have to get out of the car and respond? Did it bother him to an extent to tell me what I was doing was “supposedly” wrong? I believe a lot of the problems with people who see different perspectives or ideas are they do not understand it. Mostly, they have not lived through others’ experiences to judge or have an opinion on such. For example, homosexuality is still a societal norm. Even though, many people have begun to except it there are others who have religious beliefs and/or opinions that feel it is not right.

Unfortunately, these people have never tried to understand or ask why some humans feel attracted to their same sex. I believe ignorance can be the root of issues that lead to “violating” social norms. If more people would listen and take the time to research issues, there wouldn’t be such an idea as “violating” social norms. But, when we create certain ideas and perspectives such as, “Homosexuality is wrong.” it creates negative energy quickly through a group. Then the idea becomes our own personal sense of morality. Finally, it becomes a part of our culture.

My social expectations changed after I did this experience. I did not understand why there were so many negative reactions to me walking backwards. I felt the response was first the failure to control yourself. Secondly, a person not educating their mind to another person’s values, beliefs, and/or cultures. Finally, it led to ignorance which made the person respond is such a manner. The only person who gave me positive feedback was my professor. Does that mean a person has to be educated to understand another perspective? Do we realize that the only people who help us or support us are the ones who may have some knowledge on Sociology? It made me realize as a person that I should be opened to other cultures, traditions, and values. I felt after I did this experience that just because other people’s social expectations may not reach mine does not mean that I should disapprove and/or criticize them for theirs.

Everyone is entitled to live their lives how they want to. And whether that is being a homosexual to a nudist I should accept their particular culture within their society. At times, we as Americans can have trouble understanding others’ cultures and traditions and sometimes we tend to create consequences for our lives as well as our country. Those ideas and perspectives that we as Americans tend to have are created through our subculture. As individuals together, we create our own beliefs and values and we bring those set beliefs on others because we think it is right. Once again, in our minds we believe it is right and not consider that our subculture is meant to be our culture and not someone else’s. All in all, I have learned a lot about social norms.

When it comes to people, cultures and traditions, and myself I believe that we have all together created norms and have defined them as being either wrong or right. We can discover perspectives and ideas different from our own if we can learn from one another. Our similarities and differences is what make us different and special. If we can learn to engage our observations of other cultures, values and beliefs, we could identify problems within our own cultures. We could connect our differences that we think are unfamiliar and step into a new cultural world. Unfortunately, we are often blinded by our feelings and our beliefs. As I observe my subculture, I realize that this will never occur because we all think that we are right and everyone is wrong. Hence, social norms could be the downfall of everyone’s culture and our lives.

Breaking the Social Norm by Behavior. (2016, Jun 17). Retrieved from https://studymoose.com/breaking-the-social-norm-by-behavior-essay 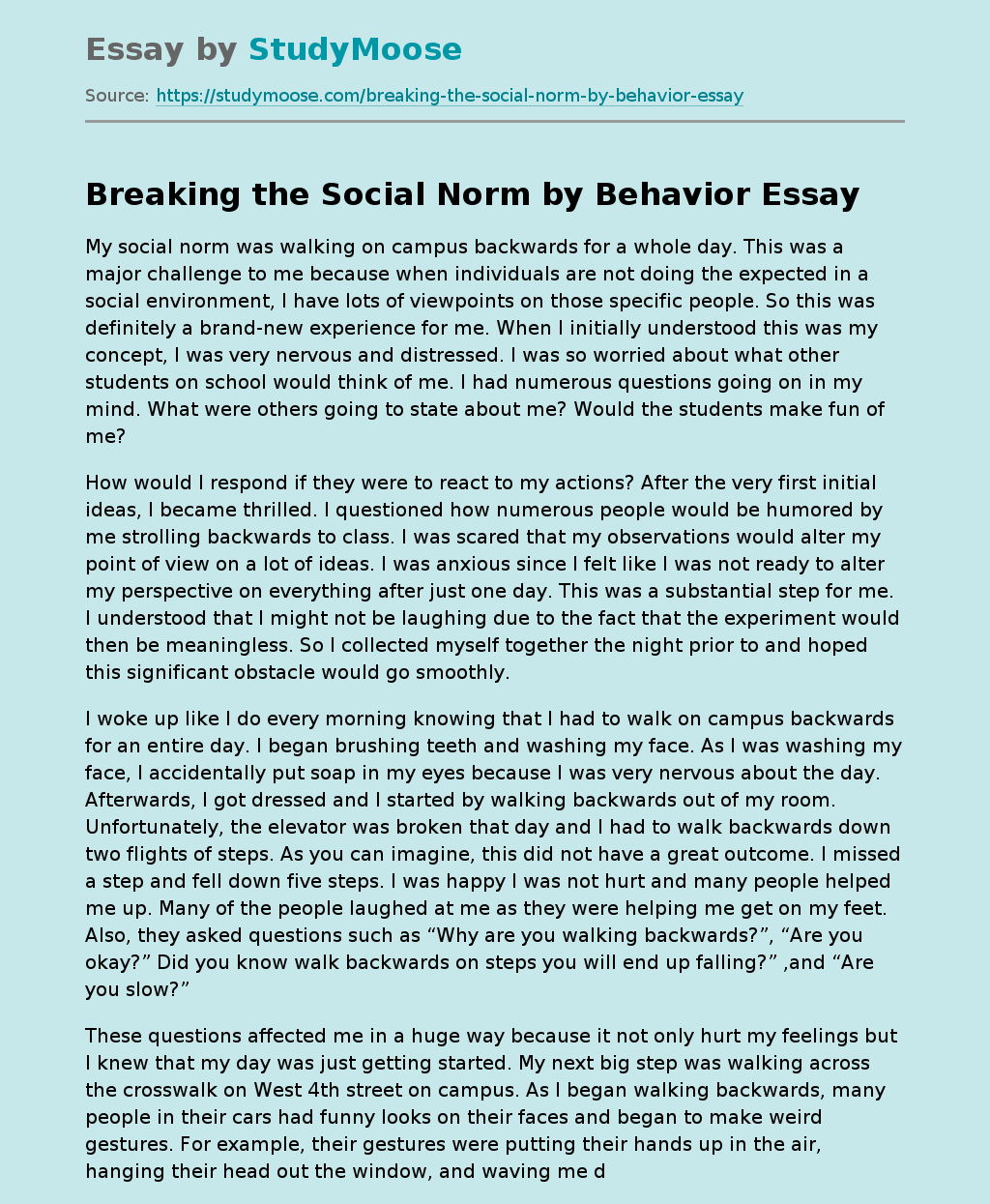