Don't use plagiarized sources. Get your custom essay on
“ Breaking Bad Sequence And Characters ”
Get custom paper
NEW! smart matching with writer

After Breaking Bad was released, 62 episodes of 5 seasons met the audience and completed the series on 29 September 2013. He won 16 Emmy Awards, 8 Satellite Awards, 2 Golden Globe Awards and 2 Peabody Awards. IMBD is still the 2nd best in the highest rated series list. the array is in position.

Walter White, a high school teacher, is a successful chemistry teacher. In times left behind from teaching, he is washing cars at a car washer, trying to overcome the financial difficulties brought by his family.

The discomfort you feel in your body as a result of breathing and the doctor appears and learns that she has lung cancer. The thought of death and leaving his family behind pushes Walter White to deep thoughts.

One day, a policeman takes a stroll to escort Hank to his brother-in-law for a few hours. In the meantime, they come across a drug bust, and Walter sees Jesse Pinkman, an ex-student, fleeing. When Walter realizes that there is a big money spinning in the middle, he doesn’t give up Jessie and goes to talk to her the next day.

He makes an offer to Jesse with the Deep Thoughts of death. Walter, who does not want to leave his family behind without money and in need of help, will combine chemical science with a synthetic drug, meth production. With the subtleties of the chemistry science, it will produce its own blue-colored meth in excellent quality and make its reputation known to the wide environment in a short time.

There will be some problems after Walter White takes over the meth business and is quickly adapted to the job. The fact that Hank is a police officer and that Walter has to keep his job even from his closest friends is a challenge. The high demand for high-quality meth and the sale at high prices makes Walter a very serious money. In the following periods, he will have to explain how he earned this money and to do some work to clear some of his money.

Our character with excellent intelligence and significant achievements in the field of chemistry has become a different spirit after learning that cancer is. When his wife and his disabled son leave behind, he realizes that he will not have anything left in his hands, meth takes the opportunity to do his job. For this reason, Walter has two different characters can be said to have. The first character is a quiet chemical teacher who loves his job and the second character is a drug producer who wanders along the shores of death and puts his hand under his stone for his family. Over time, the pressure and stress of the work will change, ruthless and difficult to do bad things in the face of a man will become. On this road, he will do great things with his ambition and determination, and will be known as Heisenberg.

Walter’s beloved wife, Skyler, does not learn about her husband’s illness for a long time. Then his wife’s leaving the job without being certain where he went away from home and can not understand. While this situation is wearing down Skyler, I keep thinking ald am I being deceived? After a while, the survivor of her husband’s illness, Skyler, is having an affair with her husband at a time when they are cheating on her husband. Skyler, who made Walter and his family’s life difficult with the wrong decisions as time passed, cannot comprehend the wrongness of what he did for a long time.

For the first time in the series, Jesse, who escaped from the raid with Walter, is a young man who manufactures and sells drugs. Walter used to be a student, and since they’re partners, they keep the bond strong. Under the image of a potential criminal victim, the problems between his family and his troubled personality, lies a man who is emotionally and conscientious. The Meth market, known by Walter and the methin they produce in a short time under fame lies Jesse’s capabilities.

Walter’s brother-in-law, Hank, is married to Skyler’s brother, Marie. In addition to being a successful police officer, he is also a talkative and fun type. After a while, he finds a drug producer, known as Heisenberg, who produces blue meth, the most sought-after name in the city. After a while he was after Heisenberg, he had a big accident and Walter was his biggest supporter.

She is the sister of Skyler, who is strange and more mobile than her sister. She has a happy marriage with her husband, police officer Hank. Marie, a kleptomania patient, struggled to combat this disease; sometimes it opens big troubles. In this disease, his older sister Skyler is the biggest helper.

Flynn, the boy of Walter and Skyler’s couple, is also known as Walter junior. Flynn, who can only walk with crutches due to some health problems, turns into a person holding them together in difficult times of his family.

Saul Goodman, who is good in his job but is usually bad in his job, is a lawyer who has dirty work like saving criminals, solving the court problems of mob bosses, laundering money. With his intelligence and success in his profession, he saves Walter and Jesse from many problems, and he grows up when they’re in trouble. We see them as only a side character in the array Goodman, Better Call Saul, which began running after the series of Breaking Bad Walter and Jesse’s life before it is processed

For Saul Goodman, a hitman, task guy and loyal assistant, Mike is another problem-solving character of the series. Even though he doesn’t like Walter, he’s gonna help you with a lot of work.

After Walter’s irresistible rise and recognition as Heisenberg, Walter is a drug dealer who started a major change. He does his job professionally and appears to be a businessman with restaurant chains from the outside. When you’re doing smart and successful, it makes Walter the biggest producer. After a while, they make much bigger money together, until they get upset for a variety of reasons.

He’s an old mafia who has an enmity with Gustavo and a drug dealer. She lives in a nursing home in a condition that may explain wheelchair convictions and requests by a bell because of old age and health problems. When Walter and Gus break down, their importance will increase.

Hector Salamanca’s nephew and a local drug dealer. His lack of love for Jesse and his psychopathic behavior attract attention in the series.

He is a character who draws attention to his somewhat naive and gentle attitude and who is the chemist of Gus. When Walter and Gus started working, he became Walter’s assistant in chemistry. 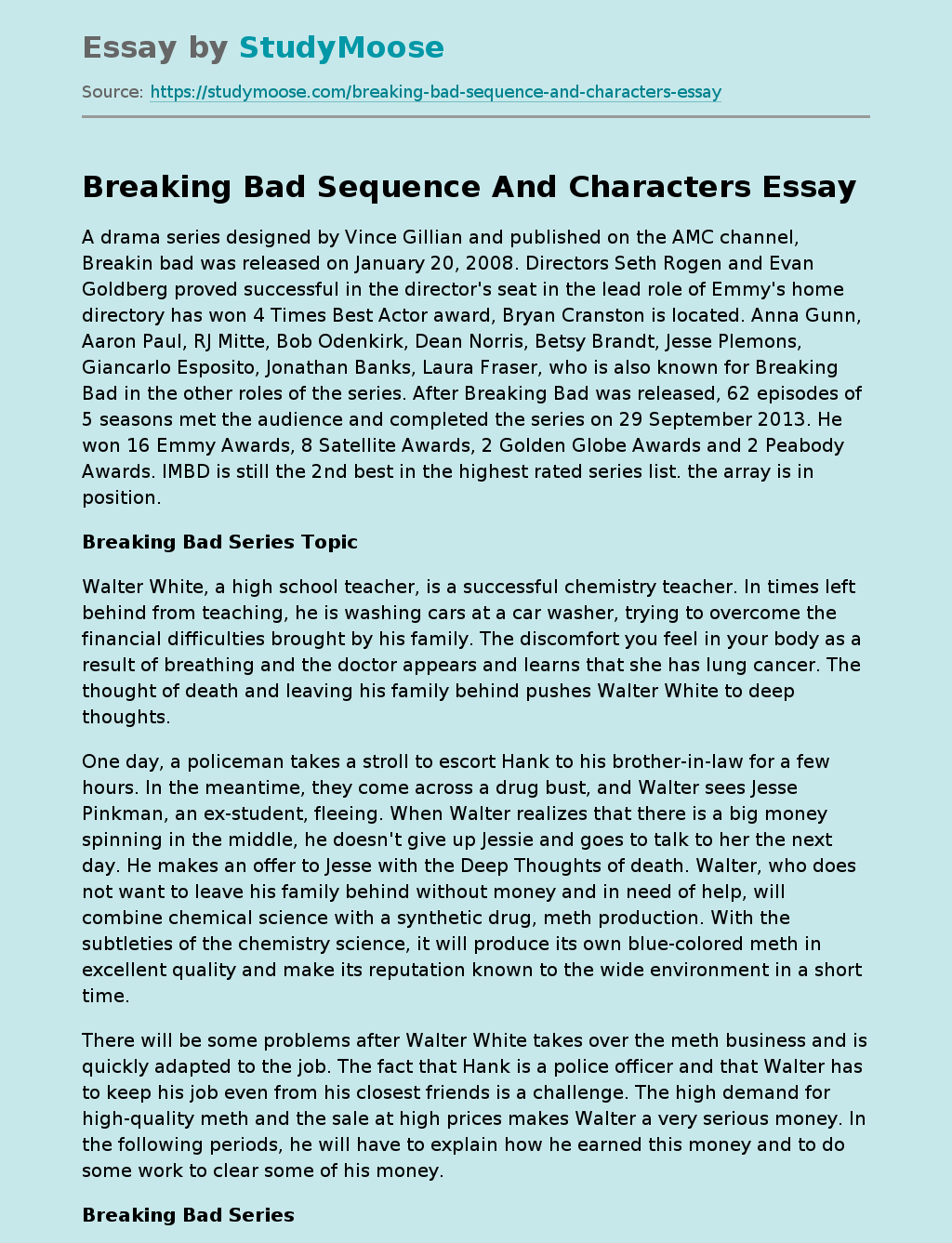