Bread Riots as a cause of the French Revolution

Thomas Paine’s Rights of Man banned; Paine condemned in absentia (he is in France) for high treason. The British government, headed by Prime Minister Pitt, begins to arrest anyone publishing anything criticizing the government. William Godwin publishes Political Justice, a huge philosophical tract that argues Paine’s case from a theoretical point of view. Godwin is not imprisoned largely because his book’s price (forty times the price of Paine’s) means it is not read by the wrong people.

Don't use plagiarized sources. Get your custom essay on
“ Bread Riots as a cause of the French Revolution ”
Get custom paper
NEW! smart matching with writer

Wordsworth writes the “Letter to the Bishop of Llandaff,” in which he declares himself “one of those odious people called democrats,” but never publishes it (likely because he feared prosecution). 1793 also sees the passage of the Traitorous Correspondence Bill, which empowered the state to open and read the Royal Mail.

While some peasants could at least hope that they would grow enough grain to cover the money owed to their landlords and the government and provide food for their family, the urban poor– who, if not unemployed, worked primarily in factories and shops–were dependent on the affordability and availability of pre-baked bread.

In the summer of 1787, a four-pound loaf, two of which were required daily to feed a family of four, cost eight sous. Due in large part to poor weather and low crop yields, by February 1789 the price had nearly doubled to fifteen sous. In his book Citizens: A Chronicle of the French Revolution, Simon Schama notes: “The average [daily] wage of a manual laborer was between twenty and thirty sous, of a journeyman mason at most forty.

The doubling of bread prices–and of firewood–spelled destitution.” Urban workers, especially those in Paris, started to protest the price of bread. When two Parisian manufacturers, Réveillon and Henriot, suggested in late April 1789 that the distribution of bread should be deregulated, thereby lowering prices and reducing both wages and costs of production, riots ensued. Laborers–not only those who worked for bakers–took violent action against Réveillon and Henriot because they feared that other employers would use reduced bread prices as an excuse to cut their own workers’ wages.

For some women, however, gathering together to discuss politics with leading philosophers or writing revolutionary pamphlets was hardly practical. To the poorer women in Paris, access to affordable bread was the most important right. In October 1789 a large group of poor women marched to Versailles, the royal palace situated twelve miles beyond the capital, to demand bread, as supplies were limited within the city. Upon reaching the palace, a small delegation of women was granted an audience with King Louis XVI. The women eventually convinced the monarch to sign decrees agreeing to provide Paris with sufficient stores of affordable bread.

The modest gains by the urban poor also proved short-lived. The decade-long revolution, which coincided with several wars against European foes, wracked France’s already vulnerable economy. Affordable foodstuffs continued to be a problem for urban families. Despite the riots and the efforts of the Convention to guarantee adequate provisions for the urban poor, the high cost of bread remained a problem. In 1792 hoarding caused a rise in the cost of sugar. Levy, Applewhite, and Johnson explain, “Speculators hoarded vast stores of colonial products such as sugar, coffee, and tea in expectation of future profits from depleted sup- plies.” Concerns over unequal allocations of eggs and butter led to riots in 1793. Urban workers lost the economic power they had gained when the National Assembly passed the Le Chapelier law in 1791, which prohibited all workers’ coalitions and assemblies. A September 1793 law placed limits on wages. Freedom from hunger and want had been the right sought most fervently by the urban poor, but it was a right they were unable to enjoy.

For peasants, change came swiftly and violently. In July 1789 France was wracked by what became known as the “Great Fear.” On the fourteenth of that month, a riot at the Bastille, a Paris prison and armory, had resulted in the death of more than one hundred people. The riot began when the citizens of Paris–fearful that troops recently sent to the city by King Louis XVI might decide to attack the populace–began collecting weapons at the Bastille. Similar uprisings against the government followed. Rural citizens began hearing rumors that King Louis XVI was ordering his troops into the French countryside to stanch peasant rebellions. Fearful peasants began burning and pillaging manors, destroying feudal records, and reclaiming what had previously been common land.

On August 4, 1789, worried that these demonstrations would not cease, the nation’s nobles agreed to give up most of their feudal rights. This decision was codified one week later by the National Assembly. Peasants were now free to earn their own wages, unencumbered by feudal tithes; the economic element of human rights was becoming a reality for the nation’s rural poor. The economic freedoms for urban laborers also widened during the revolution. The abolishment of guilds allowed artisans more oppor- tunities to find jobs, unburdened by a complicated hierarchical system. Workshops established throughout cities were sources of employment for poor women. Urban laborers frequently went on strike, with higher wages a common result. Bread became more affordable; in 1793, the price of a loaf was six sous.

The urban and rural poor were also affected under Napoleon’s rule. Napoleon continued the ban on trade unions and introduced passbooks, which limited the ability of urban workers to move freely about the nation. However, he did set maximum prices for bread and flour, thus reducing the threat of either hunger or bread riots. According to Robert B. Holtman, author of The Napoleonic Revolution, peasants did not necessarily fare badly under Napoleon, as he maintained the work the revolutionaries had done (namely, abolishing feudalism). However, other scholars have asserted that Napoleon was largely uninterested in social and economic reforms that would improve the quality of life for his poorer subjects.

Bread Riots as a cause of the French Revolution. (2016, Jul 18). Retrieved from https://studymoose.com/bread-riots-as-a-cause-of-the-french-revolution-essay 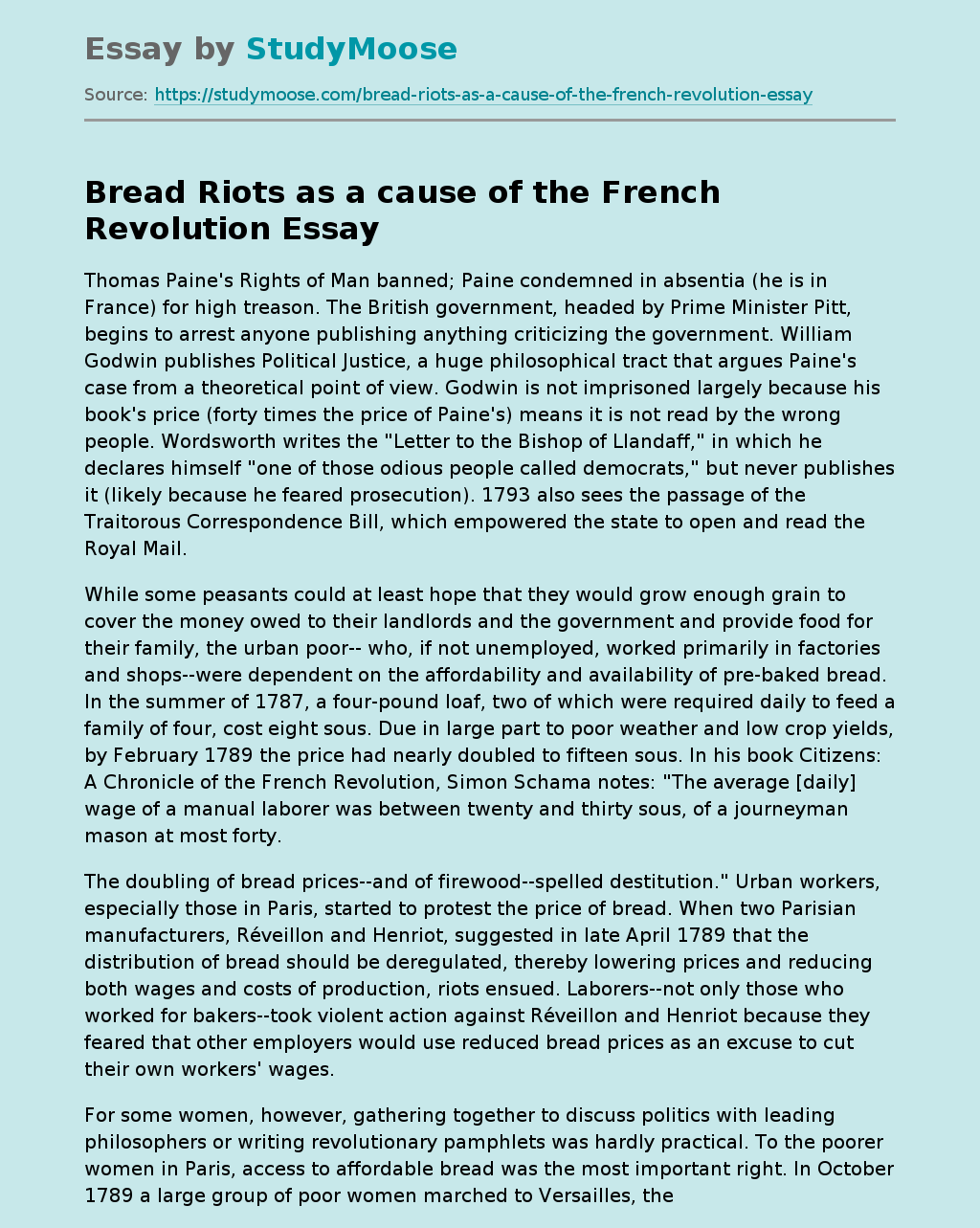