The Story “Brave New World,” sets stone in a society where everything is production based. In this society, no one can read books, enjoy nature, have relationships, to name a few in the community. Their goal is to maintain stability, community, and identity throughout their utopian lifestyle. Although, these fundamentals are set to build a more idealistic society, but unknowing caused destruction in their ranks. The fundamentals that are giving are not always followed by the ones who set them or by some of its citizens.

Irony is a constant factor in the story with some examples, such as Linda being rejected after her long-awaited return, Mustapha Mond not following the set guidelines in the world state, and John being called a savage.

Linda was a beta that was left on the savage reservation 20 years before her arrival back to London. Linda and her son John had spent their lives in a normal society from what Linda had back at the utopian lifestyle 20 years prior.

Linda returns from the savage reservation after living there for so long without all her soma. She is brought back to where she doesn’t fit in anymore and is basically shunned from the others until her death. Despite her longing to return, once she steps foot back, she ends up frail and dying when she would have lived longer if she would have never left. John had been the one that cared so much for her, while she laid sick to die on her deathbed.

Working Scholars state, “This relationship deteriorates, however, as soon as Linda gets back to London. After confronting and being rejected by the DHC, she drops john in favor of her true love: soma.”

Mustapha Mond is the ruler of all classes in the world state. He is pleasant and devoted to his work, and incredibly clever; he comprehends everyone and thoughts that are unique, which most Utopians can’t do. At one point a splendid researcher, Mustapha Mond now runs an alliance in which normal interest and imagination have been deliberately repressed to keep up a steady society. In his youth, Mond had himself flirted with doing illicit scientific research and heterodox belief. “He still keeps a small library of forbidden books in his safe. Yet he opted for training as a future world leader rather than exile. The Controller argues that art, literature and scientific freedom must be sacrificed in order to secure the ultimate utilitarian goal of maximizing societal happiness.” He has devoured such ruled out books as skilled by Shakespeare and the Bible and knows history and knowledge. It’s ironic if he does not go by the rules, he cannot be taken seriously so everyone else will think it is ok. In which this situation is causing an uproar in the society causing their perfect world to come to an end.

John was the child of his two utopian parents Linda and the director of hatcheries (Tomakin), he learned many different forms and aspects on lifestyles from the Indian culture to the utopian society he heard from his mother. John was labelled as a savage due to his lifestyle and his natural birth on the savage reservation. Living on the Mexican reservation contributed to him being called as a outcast and a savage. According to Shmoop University, “John talks all about how his mom is basically the town prostitute, but only because she doesn’t know any better. He moves on to explain his learning how to read. Since the only book Linda had for him was an instruction guide for embryo storage, his education was generally less than ideal until he got The Complete Works of William Shakespeare.” The savage has memorized lots of quotes from the book The Complete Works of William Shakespeare, which wasn’t in the utopian guidelines. The savage would often quote things Shakespeare had wrote and the utopians would go wild and slander him for saying such things.

Throughout the book irony is a big topic that plays an important role in the story and how things play out. From John the savage, Mustapha Mond, and Linda and her soma overdose these characters are just a handful in the many examples of irony throughout the story. The reservation and the world state have a lot of different rules and differ from each other. This lifestyle gives the sense of irony more characterized within the societies. Brave New World is a book full of different themes, but irony plays a big part to create the story. 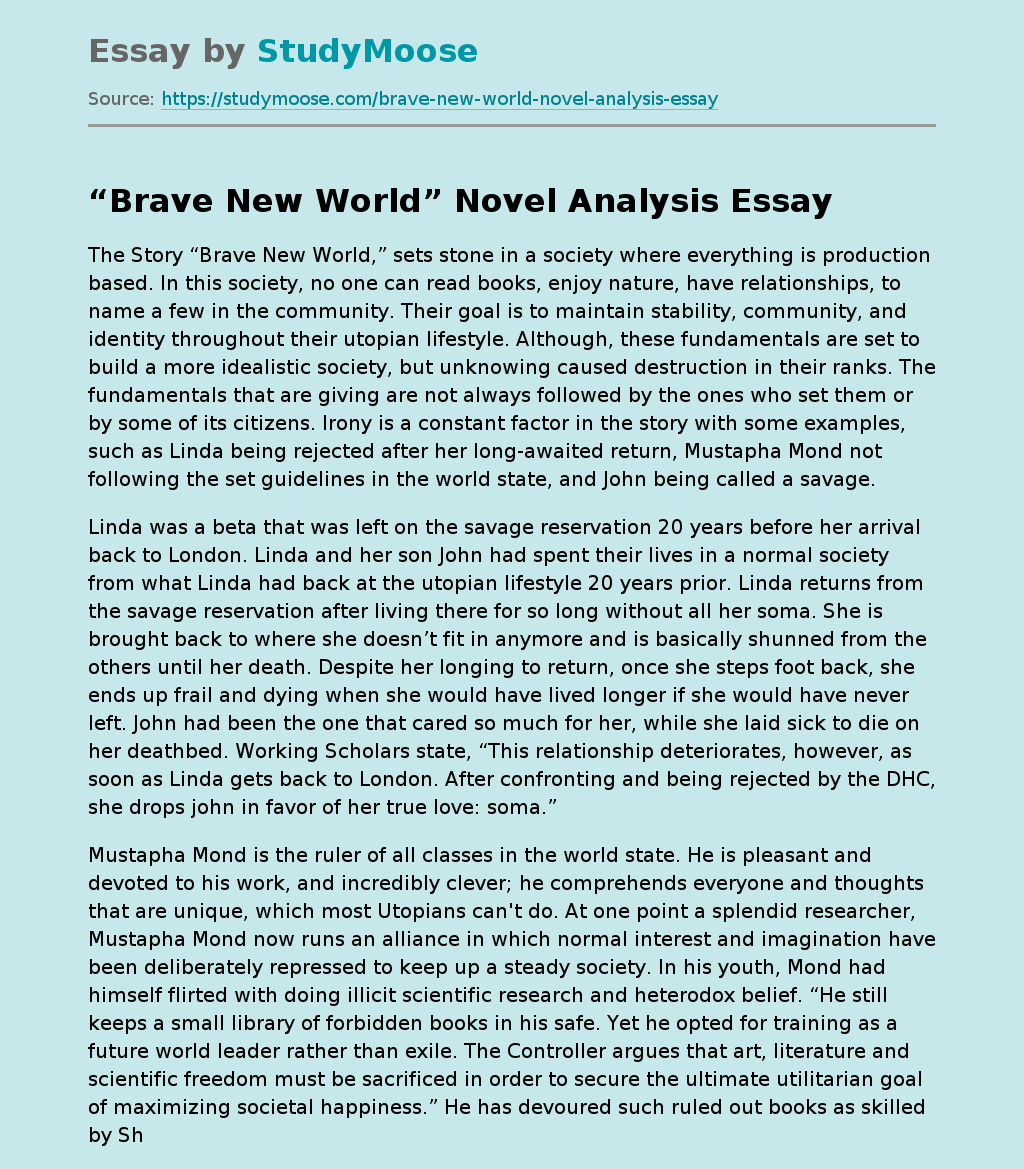