The eggs are then replicated and separated so they develop differently, and with different abilities. The babies will be born and made into ranges of superiority, ranging from Alpha to Epsilon. The lower of the five, gamma, delta, and epsilon are then replicated into 96 replicas.

The way in which these embryos are created differently is through a brutal womb simulation in which they are shocked and divided which weakens them. The Alphas and Betas are left perfectly sound to grow normally and stronger.

When it’s time for the embryos to be born, the Gamma, Delta, and Epsilon suffer the trauma of lack of oxygen and alcohol interference. These allow for the children to be guaranteed to have learning blocks, lack of capability, and defects. This type of unnatural birth simulation has other factors that prepare these babies for their “unescapable social destiny” (Huxley, 16). Aside from the actual formation of these babies, the way they are raised in early childhood allows for them to develop and adapt to conditions that simulate the living conditions they will be put into, not just to make them adapted but to allow them to learn to enjoy this environment.

To explain briefly, this is an extreme case of genetic engineering that not just creates a specific form of a child, but adds to the formulation of the “ideal” society, which is only ideal to the creator of the social system, Henry Ford.

Assess the social and political criticisms that Huxley was leveling in his dystopian novel In the brilliant dystopian novel, there’s a variety of characters who develop at different paces, living a life that is predetermined for them. In this novel, there is a character named Bernard, an Alpha who finds himself feeling depressed because of the reality of this world. Early on in the novel, Bernard is offered “Soma” which is a drug that allows the characters to erase their negative feelings and enjoy a high like feeling where they’re surrounded by positivity. This initially poses a deeper theme to the readers, which is essentially the idea that Soma is like medication in a society that never fixes a person of their mental issues, but rather pushes them off and covers them up for temporary happiness. As I reflect on society it becomes clear that it is mimicking out society that doesn’t advertise therapy but instead advertises vacations, toys, gadgets, and the newest iPhone. This sort of mindset stigmatizes therapy into a category of things for “crazy” people. It is almost as if we are being told to keep working hard for CEO’s and to avoid our mental health so we don’t quit our jobs. This is only one of many criticisms displayed in “Brave New World”. Another pressing criticism presented is the different viewpoints of the characters. There are those who are living the life intended by Ford, mindless, classically conditioned work, and there are those living with the knowledge of the truth behind their existence. John and Bernard are some of those who know the truth in their society. As they begin to see the truth in society, they begin to feel angry and depressed.

Due to their newfound knowledge, they are banished to islands so they don’t disrupt the flow of society. This poses the question of it is better to live blissfully ignorant or unaware and depressed. In our society, we have many people who are politically aware and are constantly fighting. This fight can be exhausting and depressing, while those who are blissfully unaware of the pain of politics live a sheltered life. This novel is a strong reminder that while there are two sides to every story, no matter how drastic they may seem, they need to be taken into careful consideration. Discuss your own vision of genetic engineering in the future It is 2018, and it seems that every day the media has a new idea for how to perfect the human body, whether it be with makeup, fat removal surgery, or plastic surgery. It seems that with these post birth changes that the average human is still never satisfied with their body or abilities. Although this is already somewhat in the works, I believe that in the future, genetic engineering will be available for a developing fetus. Although there are many flaws such as money determining the future of a child’s health, the ideal benefit would be to be able to eliminate deadly diseases, defects, and life-threatening issues to a child before they are born. If we were able to detect and genetically modify a child so they could be free of life-threatening problems, there would be a healthier community, allowing us to focus more on improving our physical and mental health. There are some issues that arise from this though, the first being that if a child is born and find out their parent eliminated something like autism, the child may wonder “would my parents have loved me if I was autistic?”, leading to a very depressing life.

The second issue that is proposed is the fact that science is always evolving. If babies can be cured of cancer, parents will eventually start demanding ways to modify their child’s physical and mental abilities, like being able to be extremely athletic or smart. And with great abilities and medical advances come great prices. This will end up sorting society into more of an upper and lower class, the upper class consisting of extremely smart, healthy indivisuals, and the lower class consisting of the natural humans. It is almost as if life becomes a “pay to win” simulation. While the idea of being able to eliminate great risks, the idea of advanced science falling into the hands of a population so rooted in greed is dangerous. With this being said, my final thought is a question that I do not yet have the answer to, which is: If the science is developed to assist developing humans, why can’t we cure those who are currently living? In the future, I hope genetic engineering and modification can only be done and used for good, and for all. Huxley shows a dramatic portrayal of a society gone wrong, and Earth is not far from this if we keep living in greed and ignorance. 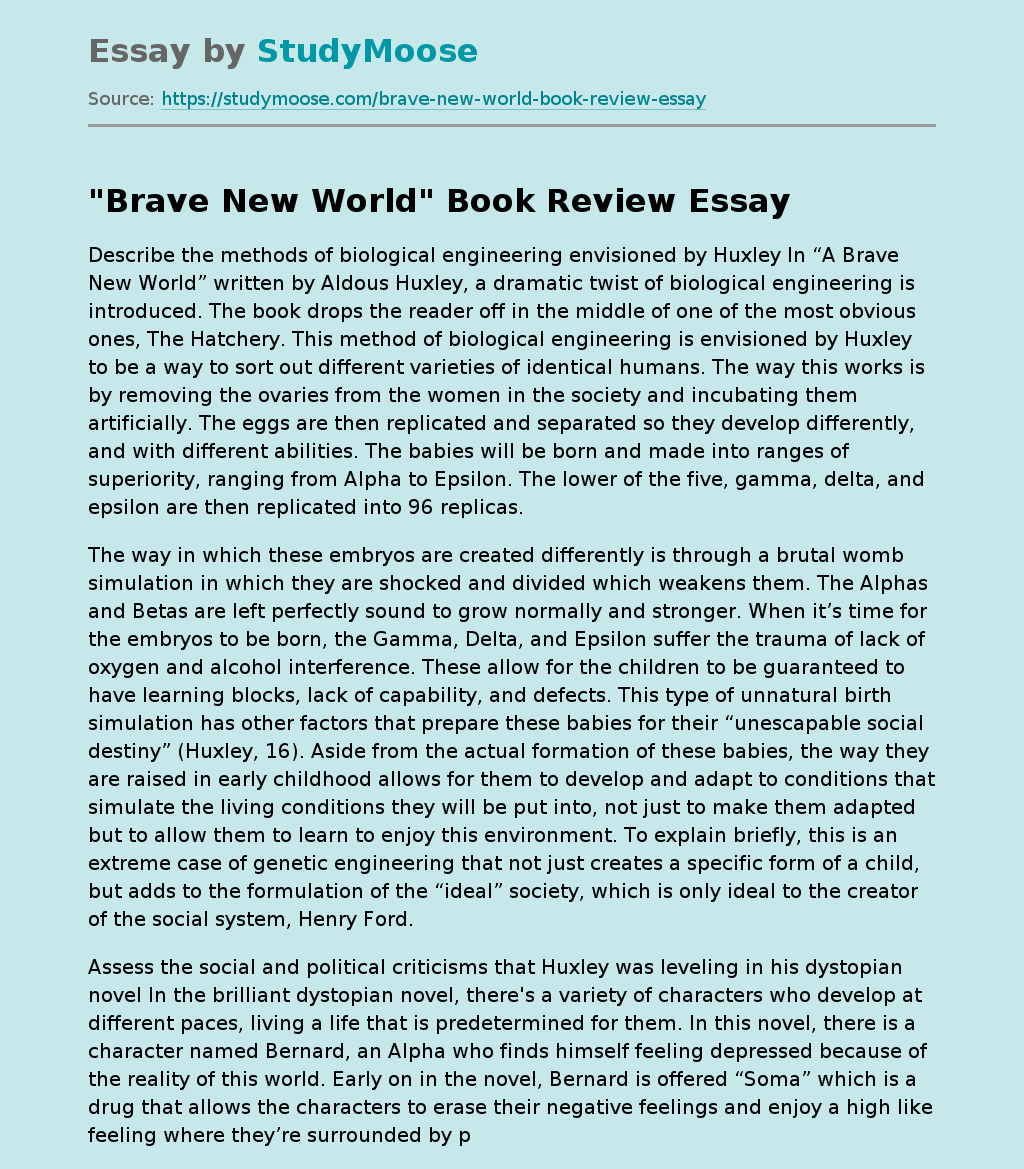