What responsibility does Nike have for conditions of work at foreign factories making its products? The company expanded efforts to stop workplace abuse and started a public relations campaign. It became the only shoe company in the world to eliminate the use of polyvinyl chloride in shoes construction, ending worker exposure to chloride compounds. It revised its conduct code, expanding protections for workers. It set up a compliance department of more than 50 employees. Its staff members were assigned to specific Asian plants or to a region, where they trained local managers and did audits assessing code compliance.

Don't use plagiarized sources. Get your custom essay on
“ Brands Marc Kasky vs Nike ”
Get custom paper
NEW! smart matching with writer

The Nike Code of Conduct said that:

Could Nike have better anticipated and more effectively handled the sweatshop issue? What did it to right? What was ineffective or counterproductive? In the early 90s, when the media and activists began reporting conditions Nike suppliers in Asia and Central America, the company imposed sweeping reforms designed to eradicate child abuse worker then opened those operations to inspection.

He developed a code of conduct for contractors, requiring them to have workplaces where there was no harassment or abuse. They could not hire minors must pay at least the minimum wage and bring a clear accounting of each pay period, before deductions for disciplinary infractions. Nike purchase full pages editorial advertisements in newspapers to broadcast his generally favorable for of work and the exceptional conditions that have her workers. Which was somewhat self-defeating way of Nike was creating advertising that said the way in which he treated his workers, placing children and black people in their ads, as this planted the problem in Marc Kasky to make an investigation, and brought forth the whole problem. That is due not Nike give information on how your company works, so perhaps this case will never happened.

Has Nike created and implemented and effective approach to social responsibility? Does it address root causes of problems in Nike’s supply chain? Should it now do more or do something different?

Nike now cares more about corporate social responsibility and careful in some of these aspects. In 2012 Nike wanted to be more transparent and publicize new purposes to help the environment and try to control the rights of all subcontracted workers in underdeveloped countries. The publication of this document (summary of the Sustainable Business Performance).

The objectives cited in the report were varied and among them the most important were: NIKE interactive web page on sustainability.

Regarding the weather i hope to achieve energy reduction of 20% in CO2 emissions per unit for the period 2015 (the footprint impact on infrastructure, transport and shoemaking) .Also, improve 15% efficiency in water use in the processes of dyeing and tailoring, and shoemaking. Make no use of hazardous chemicals by 2020 and ultimately achieve 10% reduction in manufacturing waste and weight per unit shoebox.

Regarding the most controversial social and yet throughout the history of NIKE to the end of 2020 is expected to have only topics contract factories that demonstrate a commitment to their employees and include protection and workers’ rights, issues health and safety, and a progressive movement toward defining the approach of the “just wage” proposed by the fair Labor Association.

Although this is advertised, what really matters is to be met, so hopefully within the program when finished, have minimally met these standards have been proposed. And if so, NIKE would be an example of a brand with a good Corporative Social Responsibility

Did the California Supreme Court correctly decide the Kasky case? Why or why not?

The highest American court decided to send the famous record vs. Nike Kasky lower courts, saying that did not belong to his jurisdiction. The Supreme Court rejected an appeal by the Nike Company in which it was stated that an advertising campaign to refute accusations of exploitation of staff was protected by the right to freedom of expression. The case of Nike vs Kasky, was rejected on a technicality, and in fact goes back to the lower courts of the American legal structure. But, anyway, has major implications for advertisers in general. If Nike had actually lost, would have severely limited the possibilities for companies to defend themselves publicly. Corporations and groups linked to advertising, which clung to the First Amendment to hold the event, are now in what is called “limbo”.

How should the line between commercial and noncommercial speech be drawn?

Advertising, as a sector of the economy by operation of law, is a multiplier of economic growth, so in it, the added values ​​are growing twice as fast as in the whole economy and its contribution to employment growth is four times higher than the current average. Advertising consequently exerts a positive pulse on growth.

Inappropriately limit the freedom of communication and marketing major sector operators, means pushing the competition to a price cut because of a lower quality, lack of security and the very informality of economic performance.

Brands Marc Kasky vs Nike. (2016, May 05). Retrieved from https://studymoose.com/brands-marc-kasky-vs-nike-essay 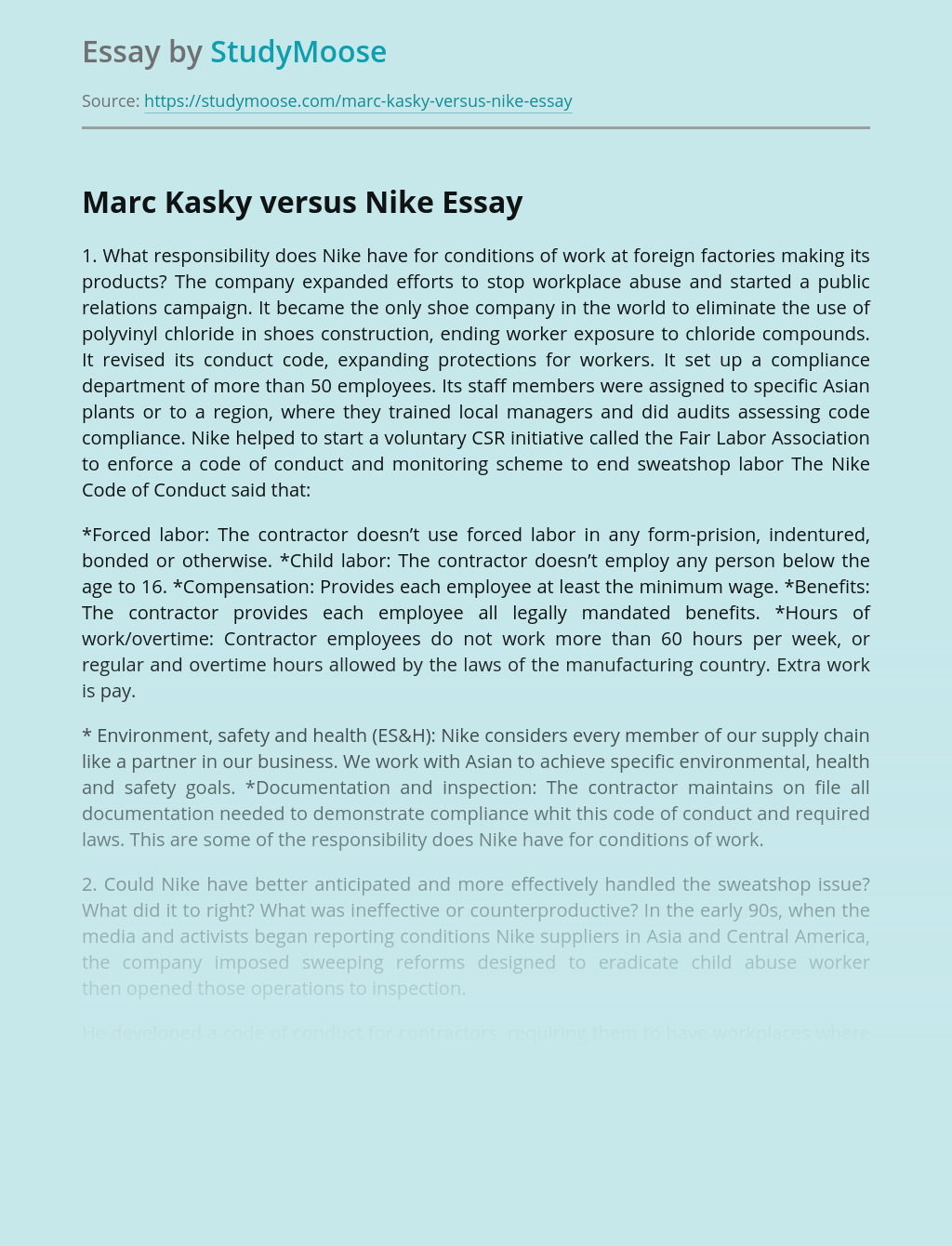