Turn in your highest-quality paper
Get a qualified writer to help you with
“ Brand Awareness ”
Get high-quality paper
NEW! AI matching with writer

In fact, brand awareness has influence on buying behavior of a buyer. (Noel. K, Francoise. R. 1995), Brand awareness can be measured by showing a consumer the brand and asking whether or not they knew of it beforehand.

However, in common market research practice a variety of recognition and recall measures of brand awareness are employed all of which test the brand name’s association to a product category cue, this came about because most market research in the 20th Century was conducted by post or telephone, actually showing the brand to consumers usually required more expensive face-to-face interviews (until web-based interviews became possible).

(Noel. K, Francoise. R. 1995), this has led many textbooks to conceptualize brand awareness simply as its measures, that is, knowledge that the brand is a member of a particular product category, e.g. soft-drinks. Examples of such measures include: Brand recognition – Either the brand name or both the brand name and category name are presented to respondents.

Brand recall – the product category name is given to respondents who are asked to recall as many brands as possible that are members of the category. Top of mind awareness – as above, but only the first brand recalled is recorded (also known as spontaneous brand recall). There has been discussion in industry and practice about the meaning and value of various brand awareness metrics. Recently, an empirical study appeared to put this debate to rest by suggesting that all awareness metrics were systematically related, simply reflecting their difficulty, in the same way that certain questions are more difficult in academic exams (Robert W. P. 1971), Brand recall

Brand Recall is the extent to which a brand name is recalled as a member of a brand, product or service class, as distinct from brand recognition. Common market research usage is that pure brand recall requires “unaided recall”. For example a respondent may be asked to recall the names of any cars he may know, or any whisky brands he may know. Some researchers divide recall into both “unaided” and “aided” recall. “Aided recall” measures the extent to which a brand name is remembered when the actual brand name is prompted. An example of such a question is “Do you know of the “Honda” brand?” In terms of brand exposure, companies want to look for high levels of unaided recall in relation to their competitors. The first recalled brand name (often called “top of mind”) has a distinct competitive advantage in brand space, as it has the first chance of evaluation for purchase. (Jonathan, 1982)

What Does Brand Awareness Mean?

The likelihood that consumers recognize the existence and availability of a company’s product or service Creating brand awareness is one of the key steps in promoting a product.

Brand awareness is an important way of promoting commodity-related products. This is because for these products, there are very few factors that differentiate one product from its competitors. Therefore, the product that maintains the highest brand awareness compared to its competitors will usually get the most sales.

For example, in the soft drink industry, very little separates a generic soda from a brand-name soda, in terms of taste. However, consumers are very aware of the brands Pepsi and Coca Cola, in terms of their images and names. This higher rate of brand awareness equates to higher sales and also serves as an economic moat that prevents competitors from gaining more market share.

Definition: A gauge of marketing effectiveness measured by the ability of a customer to recognize and/or recall a name, image or other mark associated with a particular brand. Examples: In today’s most competitive atmosphere, it is critical for retailers to maintain and build on their brand awareness, as well as reinforce the value proposition of their market. (Barnard. N, 1997)

To some, branding might not feel like a tangible aspect of running a business. It can’t be seen like a product on the shelf, or counted like a cash drawer at the end of the night. But, branding is the reason people pay three times more for a product at one store over another. (Houston 1992), Good branding is the product of a clear vision, and nobody knows more about vision than small business owners. But, with limited resources, creating a brand identity can be tricky. Fortunately, building brand awareness on the Internet doesn’t need to take a lot of money or resources. Here are seven strategies to build your business brand:

Define the vision. Before moving ahead with the web site, create a brand positioning statement. “This isn’t just, ‘What kind of web site do we want to be?’ This is ‘Who are we?’” says Harley Manning, vice president at Forrester Research in Cambridge, Mass., a technology and market research firm that advises on the effects technology has on consumers and businesses. Good brand statements typically include the company’s mission, vision and values. “It’s succinct. It’s typically something that will fit on a page easily,” he says. Build a brand worth believing in. “Do you so believe in what you’re creating that you would trademark it?” says Andrea Fitch, (president and CEO of Red Carpet Creations, Inc., and national president of the Society for Marketing Professional Services, both based out of Alexandria), Va. Really consider what kind of brand could represent the business through the next decade. “Don’t have a logo that in five years you’re going to be tired of and discard for another,” she says. Remember, the web site is the brand. “A web site is not just a communication medium,” Manning says.

“It is actually a channel that must deliver on the promise.” Essentially, a web site should embody the promise that it makes to customers. If, for instance, a business claims to be innovative, the web site should look fresh and modern. Create a cohesive experience between all mediums. Before she launched her company’s new web site, Fitch made sure it would be an event that her potential clients would never forget. Red Carpet Creations mailed 4,000 silver tubes containing scrolls that looked like rolled-up carpet. Inside the scrolls was an announcement about the web site’s launch. Once online, the web site was an extension of the invitations because it followed through on the themes of red carpet imagery and references to visitors being treated like a VIP. Customers should easily be able to recognize the company’s brand, whether it is print, online or some other form of media, Manning says. Don’t sacrifice creativity.

Once the brand’s guidelines are established, creative choices must bring those attributes to life, Manning says. Don’t let the company’s brand become so dominating that there is no room for new thoughts and ideas. Brand should be the jumping-off point for interesting ideas, not the place where every new idea dead-ends. Fitch stresses that a sense of fun and whimsy will only enhance the likelihood that people will take an interest in the web site. Don’t communicate brand at the expense of delivering. While a web site can be a significant tool for building brand awareness, clarity and functionality are paramount. “Just be careful not to let the communication about your brand get in the way of delivering your message,” Manning says. People should be able to understand how to navigate the site without knowing a thing about the company’s catch phrases.

“You can’t frustrate and annoy people into liking your brand (Houston, 1992), Listen to the customers: They determine a brand’s true value. Pay attention to customer feedback about the site because, ultimately, it’s the customers’ opinion that counts. When it comes to building a brand, a company can incorporate everything from signature colors to catch phrases, but at the end of the day, it’s the consumer who decides what a brand is really worth. “It’s not what you say [about] yourself, it’s what others say of you, How do consumers make decisions? This question is at the core of much of marketing examination over the past 60 or 70 years. As marketers manipulate the various principles of marketing, so do the consumers they seek to reach-choosing which products and services to buy, and which not to buy, choosing which brands to use, and which brands to ignore. The focus of this paper is to examine the major decision-making models, strategies, and theories that underlie the decision processes used by consumers and to provide some clarity for marketing executives attempting to find the right mix of variables for their products and services.

Early economists, led by Nicholas Bernoulli, John von Neumann, and Oskar Morgenstern, puzzled over this question. Beginning about 300 years ago, Bernoulli developed the first formal explanation of consumer decision making. It was later extended by von Neumann and Morgenstern and called the Utility Theory. This theory proposed that consumers make decisions based on the expected outcomes of their decisions. In this model consumers were viewed as rational actors who were able to estimate the probabilistic outcomes of uncertain decisions and select the outcome which maximized their well-being.

However, as one might expect, consumers are typically not completely rational, or consistent, or even aware of the various elements that enter into their decision making. In addition, though consumers are good at estimating relative frequencies of events, they typically have difficulty translating these frequencies into probabilities. This Utility model, even though it had been viewed as the dominant decision-making paradigm, had serious shortcomings that could not be explained by the model. (Herbert S, 1950) proposed an alternative, simpler model. This model was called Satisficing, in which consumers got approximately where they wanted to go and then stopped the decision-making process.

An example of this would be in the search for a new apartment. Under the Utility theory, consumers would evaluate every apartment in a market, form a linear equation based on all the pertinent variables, and then select the apartment that had the highest overall utility score. With Satisficing, however, consumers might just evaluate apartments within a certain distance to their desired location, stopping when they found one that was “good enough.” This theory, though robust enough to encompass many of the shortcomings of Utility Theory, still left significant room for improvement in the area of prediction. After all, if a marketing executive can’t predict consumer behavior, then what use is a decision-making paradigm? Simon and others have extended this area in the investigation of the field of bounded rationality.

Following Simon, additional efforts were made to develop better understandings of consumer decision making, extending beyond the mathematical optimization of Utility Theory and the somewhat unsatisfying Satisficing Theory. In the late 1970s, two leading psychologists, Daniel. K and Amos. T, developed Prospect Theory, which expanded upon both Utility Theory and Satisficing Theory to develop a new theory that encompassed the best aspects of each, while solving many of the problems that each presented. 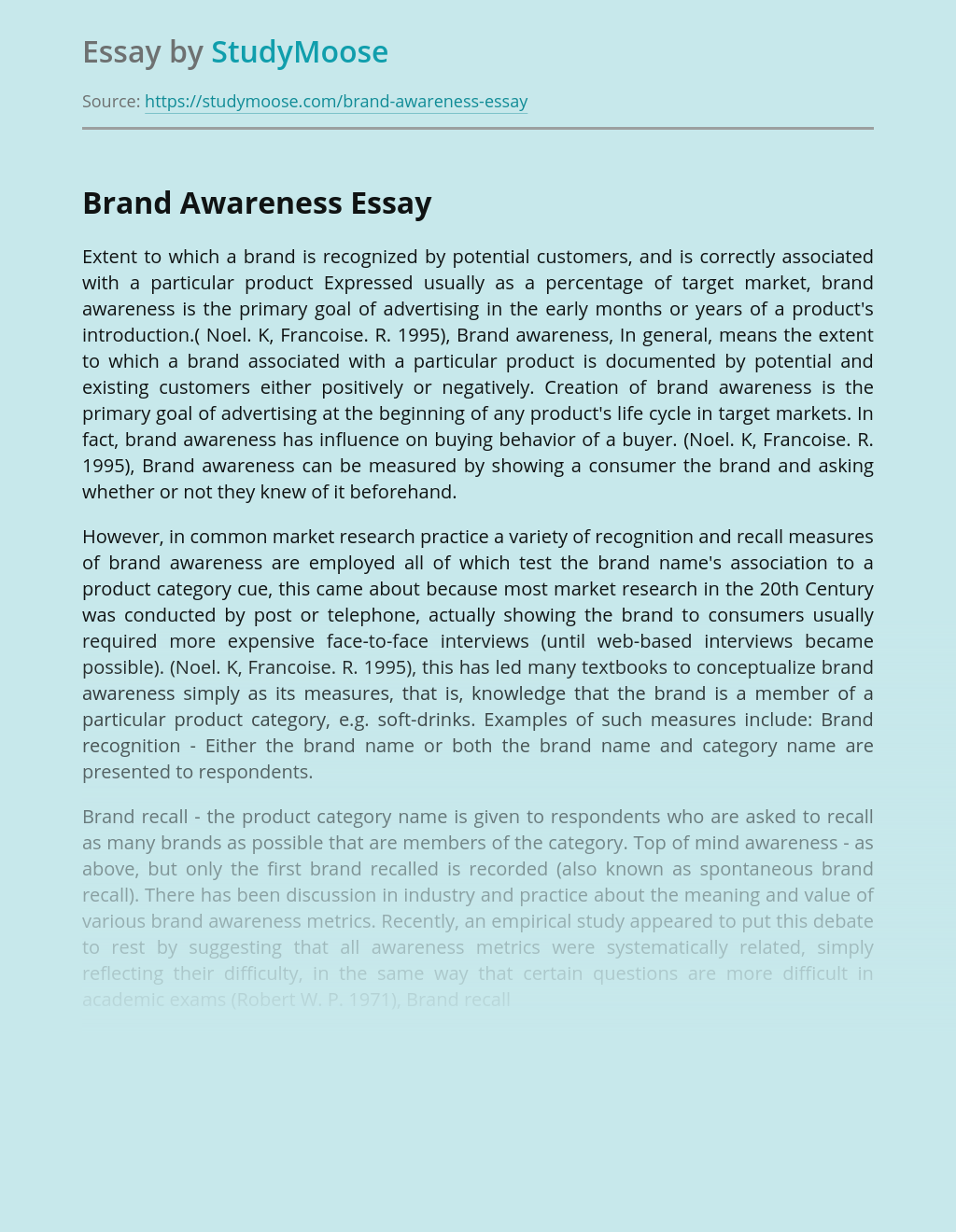 Turn in your highest-quality paper
Get a qualified writer to help you with
“ Brand Awareness ”
Get high-quality paper
Helping students since 2015
Stay Safe, Stay Original