The BP oil spill is the most resent oil incident. The oil spill was really big and caused a lot of mess and damage to nature. It killed a lot of animals and fish and made the water dangerous. BP says that they were working hard to clean the oil up. They were taking a really long time. BP has responded to todays US Government report into last year’s Deepwater Horizon accident, it says it agrees with its core conclusion, consistent with every other official investigation that the accident was the result of multiple causes, involving multiple parties, including Transocean and Halliburton.

Don't use plagiarized sources. Get your custom essay on
“ BP vs Exxon ”
Get custom paper
NEW! smart matching with writer

From the outset, BP acknowledged their role in the accident and has taken big steps to further enhance safety and risk management throughout its global operations, including the implementation of new voluntary standards and practices in the Gulf of Mexico that exceed current regulatory requirements and strengthen the oversight of contractors. A lot of different dirty oily thing was all over the beaches.

Tar balls washed onto Gulf of Mexico beaches from Tropical Storm Lee shows that oil left over from 2 year’s BP spill isn’t breaking down as quickly as some scientists thought it would.

Auburn University experts who studied tar samples at the request of coastal leaders said the latest wave of gooey balls and chunks appeared really fresh, smelled strongly and were barley changed chemically from the weathered oil that collected on Gulf beaches during the spill. The study concluded that mats of oil, not weathered tar, which is harder and contains fewer hydrocarbons , are still submerged on the bottom of the sea and could pose a long-term risk to coastal ecosystems.

BP didn’t immediately comment on the study, but the company added a lot of cleanup crews and extended their hours after large patches of tar balls polluted the white sand at Gulf Shores and Orange Beach starting maybe around Sept. 6. Tar balls also washed on shore in Pensacola, Fla. Which is to the east and was farther from the storm’s path. Marine scientist, George Crozier, said the findings make sense because submerged oil degrades slowly due to the relatively low amount of oxygen in the Gulf of mexicos sandy bottom.

“It eathered to some extent after it moved from southern Louisiana to Alabama … but not much has happened to it since then,” said Crozier, longtime director of the state sea laboratory at Dauphin Island. Crozier said remnants of the spill are economically toxic for tourism, but he doubts there is much of an environmental threat. The oil lingering on the seabed is of a consistency and chemical composition somewhere between crude oil and tar, he said. The company did not agree to a request by the city of Gulf Shores to expand the latest cleanup efforts to include big heavy machinery.

Auburn studied tar balls that were dragged up by Lee at the request of the city of Orange Beach with outside funding from the city, the National Science Foundation and the Marine Environmental Sciences Consortium. The study wasn’t reviewed by outside scientists before its release. The numbers don’t lie, two weeks ago, a man named skimmers picked up roughly about 25,000 barrels of nasty dark oily water from the gulf of Mexico. On Thursday of two years ago, they gathered just about 200 barrels of the stuff that’s killing the environment.

Still, it doesn’t mean that all the oil that gushed for weeks is gone. Thousands of small oil patches are still under the surface, but experts say an astonishing amount has disappeared, reabsorbed into the environment. On the other hand, Exxon’s oil spill was in 1989. The oil spill was really really big also. On March 24, 1989, the tanker Exxon Valdez, en route from Valdez, Alaska to Los Angeles, California, ran aground on Bligh Reef in Prince William Sound, Alaska.

The ship was traveling outside normal shipping lanes in an attempt to avoid ice(but still ended up crashing). Within six hours of the grounding, the Exxon Valdez spilled approximately 10. 9 million gallons (wow that’s a lot I bet the fishes was mad) of its 53 million gallon cargo of Prudhoe Bay crude oil. Eight of the eleven tanks on board were damaged. The oil would eventually impact over 1,100 miles of noncontiguous coastline in Alaska, making the Exxon Valdez the largest oil spill to date in U. S. waters.

The response to the Exxon Valdez involved more personnel and equipment over a longer period of time than did any other spill in U. S. history. Logistical problems in providing fuel, meals, berthing, response equipment, waste management and other resources were one of the largest challenges to response management. At the worst part of the response, more than 11,000 personnel, 1,400 vessels and 85 aircraft were involved in the cleanup(but still didn’t get the job done right). It killed lots of animals. 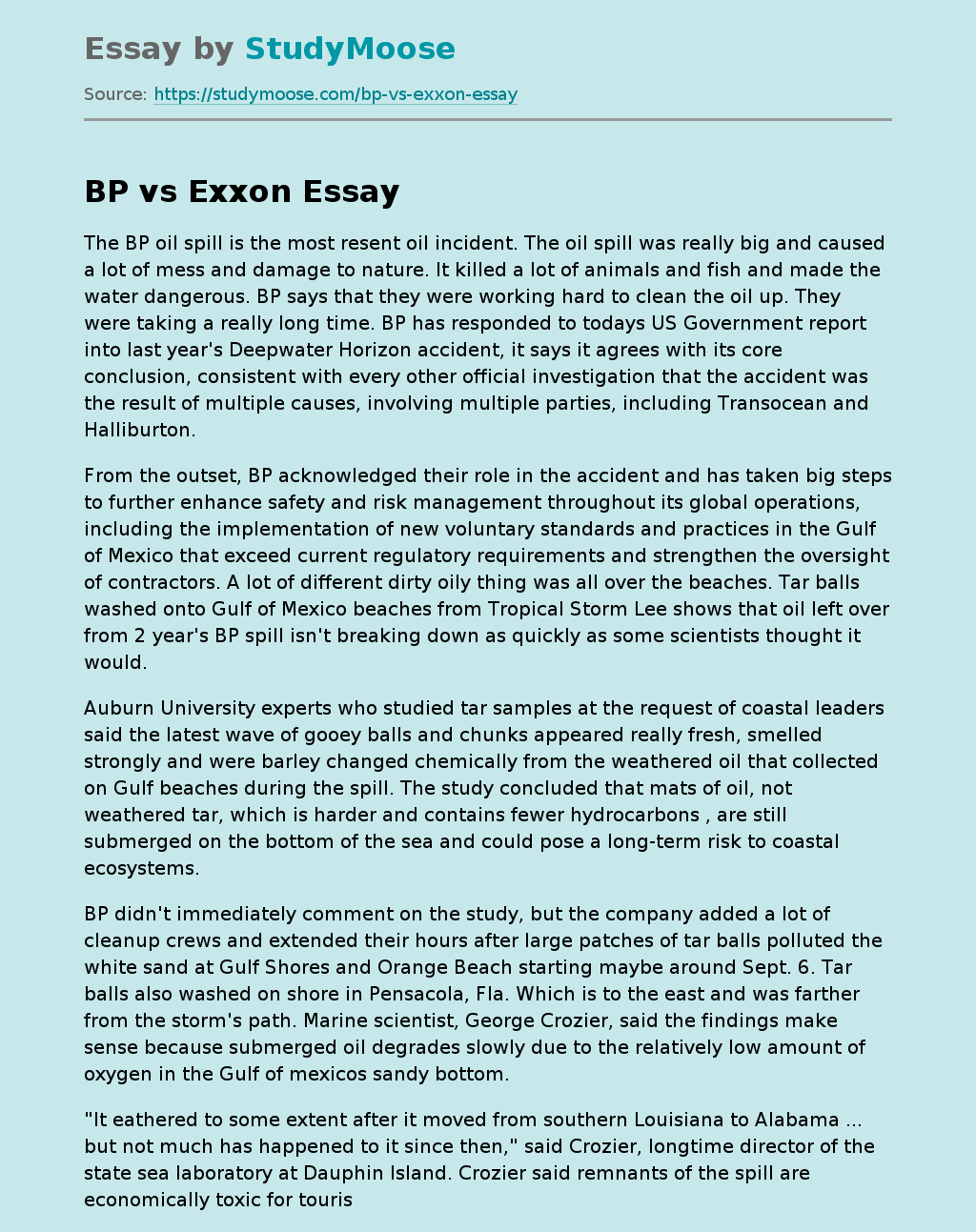