Both texts are set in pre modern society’s so both protagonists face tribes and tribulations which in Jane Eyre include misogyny, classism and similarly in the kite runner, racism, discrimination. These unjust treatments which is no longer lawfully aloud and is now frowned upon would be a shock to the audience but also as the bad occurrences happen so often in the mind of the audience it would the biggest and most prominent factor that affects the characters. Especially in today’s society where people are seen to be shaped more so by their negative experience more so than there positive ones.

Don't use plagiarized sources. Get your custom essay on
“ Both texts are set in pre modern society’s so both protagonists face ”
Get custom paper
NEW! smart matching with writer

However it can be argued in both of the novels that it was not so much the oppressive factors in their life that shaped or influenced them it was the positive that either came from it of helped them get through it.

Jane Eyre highlight the contempry harsh realities that a woman and someone of lower class would face in a Victorian society especially for a woman who wanted to make her way through the world and not conform the expectation of her main purpose being to get married and live mainly only through her husband.

This societal oppression of not being able to do what she wants causes her to take on a sort of rebel persona. Her desire to learn and her independent thoughts is seen to be disobedient and is therefore met with negative reinforcement and punishment. From 1933-1973, Afghanistan was a monarchy ruled by King Zahir Shah.

On July 17, 1973, when the king was on vacation, Mohammad Daoud Khan seized power. Mohammad Daoud Khan was Zahir Shah’s cousin and a former Prime Minister of Afghanistan. The military coup was nearly bloodless, but as we see through Amir’s story, it was still a frightening time for the people of Kabul who heard rioting and shooting in the streets. During this time there would have been a lot of pressure on people in Afghanistan with the frequently changing government which had the effect of empowering fundamentalists and communists, who started violent protests including plots to overthrow the monarchy. The main protagonist Amir loves his father dearly. There’s a story in The Kite Runner about Baba, in which he is said to have wrestled a bear and won. He likely won because he didn’t yield much in size to the bear. Babas character is seen to be the epitome of what the perfect Muslim man should be at those times. Amir he strives continually for his father’s approval. More times than not, Baba will give Amir a word of encouragement or a sign of recognition, but that is it. He is very hard on his son. He expects great things from his son, just as he has accomplished, but he fails to understand that Amir is not Baba. This pressure was very impactful on amirs childhood, no matter how hard he tried he just couldn’t live up to his fathers and others expectations of him. Amirs father was concerned with appearances so others also witnessing amir not accomplish much or see that he was most likely not going to follow in his father’s footsteps would affect his view of his own son. This similar to jane Eyre emphasises how societal pressure can infiltrate and affect families, peers and their relationship and views of each other as it is drilled into us at a young age that we must live up to expectations, be perfect and anything other is abnormal and we are heading down the route of ‘failure’. Middle class woman during the 1800s This pressure effected Amir greatly especially as it was instilled at a young age, his character became to care more about others opinions of him then doing the right thing as is shown in situations such as with his friend Hassan. Amir becomes presented with a situation to do

Both texts are set in pre modern society's so both protagonists face. (2019, Dec 13). Retrieved from http://studymoose.com/both-texts-are-set-in-pre-modern-society-s-so-both-protagonists-face-example-essay 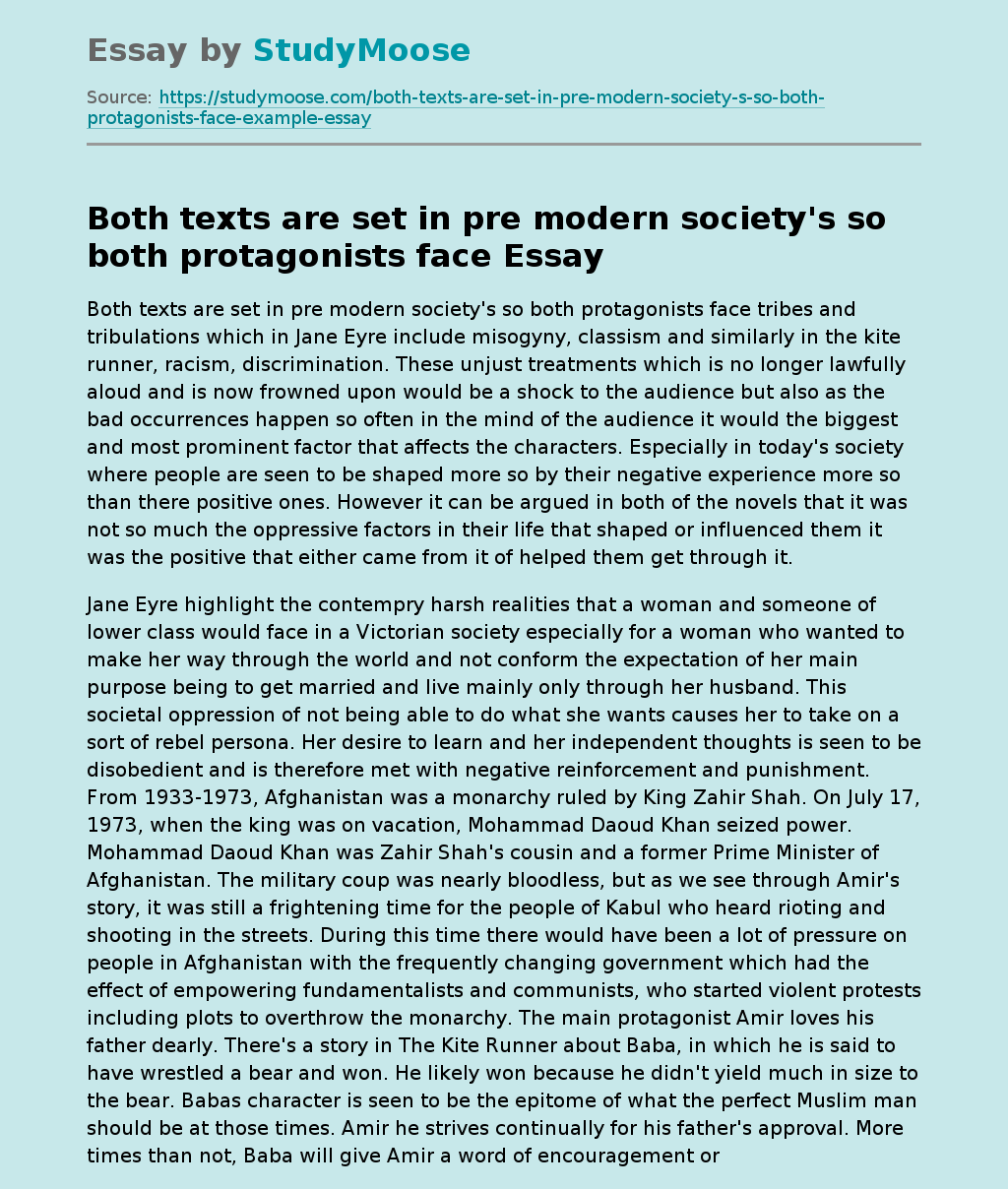