The first objective is to gain generous contributions. The amount per donator, ration between new donators and new contacts (collection rate) and the total amount of the donators and contributions are ways to measure how this aspect is doing. Incentives for the staff should also be incorporated into these objectives, especially ones that steer the process towards multi-year support programs. To measure the board involvement and recruitment, it is important that the reputation of the new board member is blameless and since operating in Boston, a local person with strong ties to the community would be better.

Don't use plagiarized sources. Get your custom essay on
“ Boston Lyric Opera ”
Get custom paper
NEW! smart matching with writer

To measure involvement the easiest way is to look the member’s activity, how many times they’ve been in meetings and how they’ve acted to build strategy. For example number of new initiatives. Also hours spent educating the board members about strategy and vision could be one measurement. Building an artistic reputation is hard and so is measuring it.

Reviews on papers give a sight how the opera is doing, but the best way to know is to make a consumer survey for example once a month. Also comparing the growth in visitors between BLO and other operas gives an idea. Rating different aspects is another way to measure the artistic view.

Giving value for example to the lead singer or the orchestra will help to understand how the opera is doing on its main field. These measures aren’t very proactive though, but helpful anyway. One objective is to launch a residency program.

Its success can be measured by the amount of acceptances to invites and by comparing the audience amounts to normal. Like when measuring artistic reputation, the best way to measure how exciting and diverse opera’s repertories are is to see reviews and audience amounts. The grading system works when the given grades are compared to the rivals’ same grades and the shows are compared.

These are of course not proactive measures. BLO wants to collaborate with other major artistic institutions like museums and theatres. Also other operas and specially talents working in them are important. One way to measure collaboration is the amount of tickets to opera that our associates sell. How many per cent of the total amount of sold tickets is it and have these collaborations brought new visitors to BLO. Community support and focus on community programs can be measured with the amount of local donators and specially the amount of new supporters.

Has the PR-campaign been affective? Have local companies supported the opera? This can be measured with the amount of companies. Measurements that measure processes in line with the strategy are not always easy to find and it usually takes a lot of time to find the right ways to use them. Often they need to be adjusted or reset to fit the strategy. The main challenge is to find measures that are pro-active and directive instead of controlling.

Boston Lyric Opera had not really measured their organizational performance before.

This had ultimately caused lack of focus and limited accountability. Boston Lyric Opera was mainly led by qualitative values as quantitative measures and financials were not the topmost factors in decision making. The new general director Janice Del Sesto and BLO’s board acknowledged that there was a history of expensive opera productions and large losses in Boston’s opera scene and they had to adapt a new business philosophy in order to operate fiscally. Non-profit organizations often have a lack of focus and their strategy concentrates to too many things at the same time.

Ken Freed, a BLO board member, acknowledged that a more formal strategic planning process was essential for BLO in order to avoid mistakes that several arts organizations had made in the past. They decided to adapt the Balanced Scorecard to focus their strategic planning process. Using the Balanced Scorecard, BLO and its employees could see their day-to-day activities within a bigger and more strategic context. They started the change by defining BLO’s mission, strategy, competitive advantages, and distinguishing characteristics that would make it unique. The biggest change here was BLO reshaping its strategy.

They acknowledged that their most important “customers” in this situation are the people who resourced their organization. BLO received nearly 70 percent of their operating budget from sources other than ticket sales, mostly from donors and supporters. BLO decided to place donors and supporters as their main interest group in the Balanced Scorecard. They were the body that enabled BLO to carry out their mission and strategy. Even though Boston Lyric Opera is a non-profit organization and its output is intangible, its organizational performance can be measured by quantitative measures.

Lyric Opera had a new question ahead of them.

They had to figure out what they wanted to become. BLO’s existing strategy was not valid anymore as their operating expenses rose and revenues from ticket sales were limited.

BLO decided to adapt the Balance Scorecard in order to set new strategic objectives and measure their performance against those objectives in order to overcome to challenges they were facing. Adapting the Balanced Scorecard, BLO was able to compose a clear and precise strategy. Actually, the strategy itself was quite complex and multidimensional but the Balanced Scorecard gave it a framework that presented the new strategy clearly. BLO set three strategic themes that they felt were important in reaching their goals and they had objectives and measures of success for all of the themes.

Using the Balanced Scorecard and the strategy map, BLO was also able to communicate the new strategy clearly to their staff, stakeholders, and other associates. The fact that BLO now had sufficient information of their organization and operations, it could draw new donors to them. By using the Balanced Scorecard, BLO recognized their key success drivers and they started to focus on the activities that had the greatest impact on their goals. They all had a clear common goal and BLO’s staff worked cross-departmentally, motivationally to reach the goal of providing unique, uality opera in Boston. However Jessica Del Sesto and Sue Dahling-Sullivan faced some difficult challenges and barriers to capture the above-mentioned benefits. There was some opposition from a few board-members of changing the organization’s governance structure, adapting the Balance Scorecard and managing an art organization by quantitative measures. These “old school” members did not understand that BLO could not compete with the great opera houses and they could not standout from the crow without differentiating in some way.

The departmental managers and the employees of BLO are more empowered after the BSC but the artistic leaders are less. The managers are now more empowered because every department now gets to plan its own scorecard, and describe the ways how the department would meet the high level strategic goals. The employees are with the scorecard more empowered, as they can see the work in a more strategic context and therefore set priorities more effectively themselves. However the artistic leaders felt that the scorecard and specially the repertory planning template could limit their opportunities in designing productions.

Del Sesto uses the BSC as a managerial system. The BSC purely concentrates on the big picture; everything is based to support strategy. Del Sesto believes that the BSC helps her to steer board members’ attention to proper tasks. Also, she thanks BSC for helping employees to think more strategically, and with greater clarity towards their objectives. All in all, Del Sesto is clearly more interested on the management aspect of the BSC. One explanation to this is that BLO is a nonprofit organization. Its reason to exist is not to make profit to its owners but to offer culture to the community.

All the objectives connected to the three main points are easier to measure with controlling measurements.

Kaplan and Norton have studied the success of BSC implementations in different organizations. They have concluded five principals that contribute greatly to the success. These principals can also be found on BLO’s BSC implementation. The process started with planning. Group consisting members from all functions thought in several meeting how the BSC should be made and what BLO is now and what it wants to be. All possible views were brought to conversations and the members were challenged to use their imagination.

As a result the group made three strategic themes which determined the main points to BLO’s future strategy. These three big themes were divided to smaller parts and brought to a form that is clear to everyone in the organization. This is similar to Kaplan’s and Norton’s principal 1, where the strategy is translated in to operational terms. The BSC was completed by determining the actions to be made so that the strategy can be fulfilled. After this all parts of the organization got to make scorecards of their own and were so committed to the strategy.

The whole organization was aligned to meet the strategy (Principle 2). The project succeeded because BLO was able to find the crucial processes and finish them through. The personnel were part of the developing strongly. During the process of creating the BSC, the role of the entire staff in overall success was emphasized. This made them easier to adapt the new way of doing things and easier to understand the strategy and how it can be fulfilled (Principle 3). Often when BSC implementation fails it is because the scorecard is considered to be only management’s project, just a top-level adjustment.

As always with large scale organizational changes, also this project faced some resistance. Some board members and artistic staff were unsure about the motives for changing the old customs. This problem however was solved, as the need for change was successfully communicated through various levels of the organization (Principle 5). Other crucial point which was done well was the targeting. The mission was announced clearly and the goals were easy to understand. The three major themes were chosen wisely and chopped in to smaller pieces well. 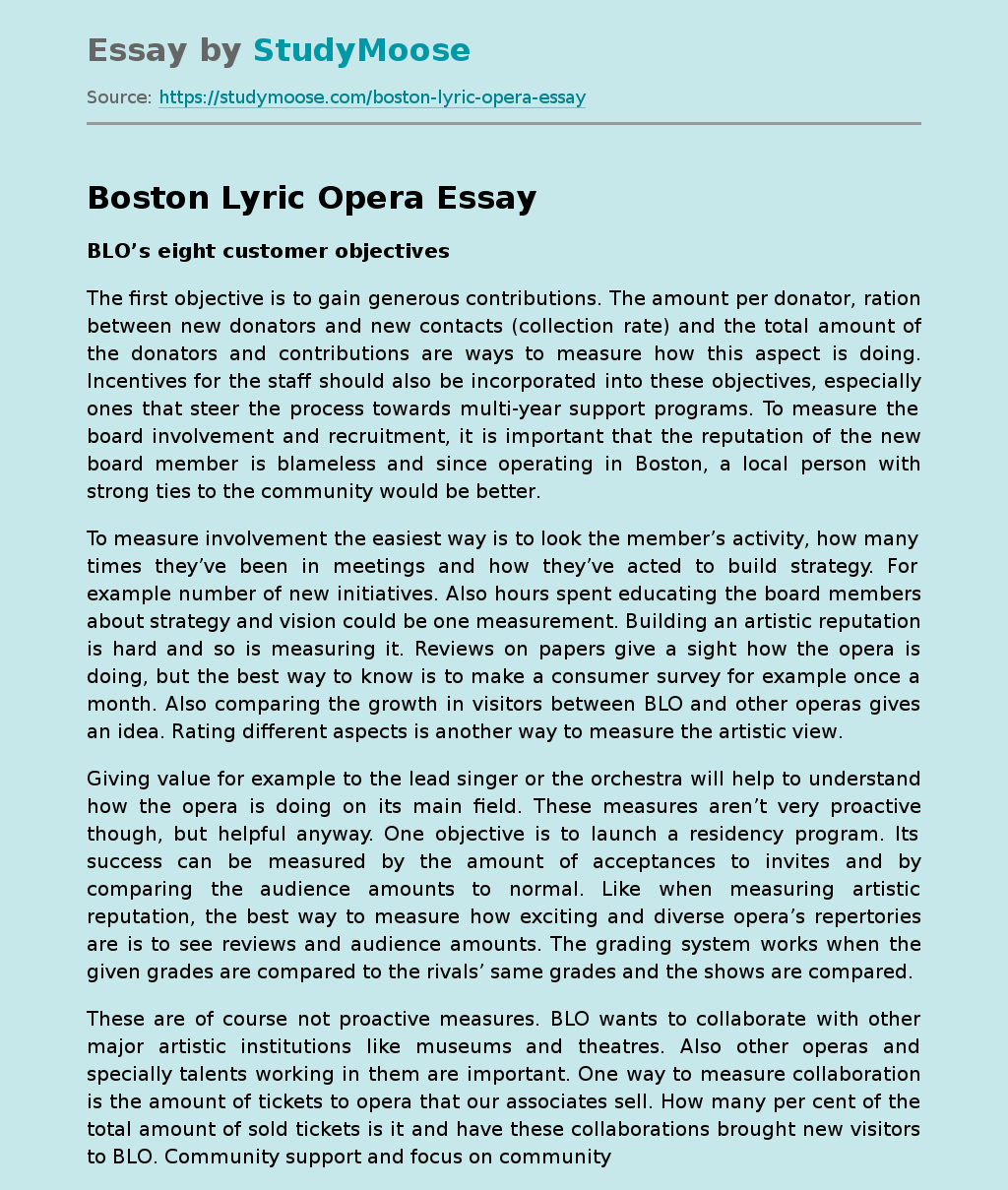