Born Worker is a short story that talks about a boy his name is Jose. Jose and his cousin Arnie came from various backgrounds. Jose was born to work. one day Arnie came to Jose and informed him we must interact we need to open a company doing tasks for people however what happens that Jose does all the work and Arnie simply relax. One day they were contacted us to clean a swimming pool for an old man his name is Mr.

clemens as typical Arnie sit and Jose does all the work.But when the old man falls under the pool and fractures his head open Jose sticks with him (even thought Arnie desired to escaped so he wouldn’t enter difficulty). After what occurred with Jose he realizes that he appreciate helping people unlike his cousin he appreciates repetition.

To start off, Jose as being more mature than his cousin, Arnie, that comes with a lot of responsibility such as in the text it states, “Jose was born with a ring of dirt around his neck, with grime under his fingernails, and skin calloused from the grainy twist of a shovel.

” This explains the theme being, “Whatever you set your minds to, it’s possible” because even at birth Jose shows his integrity and hard work. You would never think a young baby would be grinding things, building things, and working. He is already doing hard work at a young age. “They said his palms were already rough by the time he was three, and soon after he learned his primary colors, his squint was the squint of an aged laborer.

“This text evidence proves the theme because it showed he already had the look of a man that has worked his whole life. It is Jose’s dream to work with his hands more than his mind. In the story, the author stated, “His eyes could measure a length of the board, and his knees genuflected over flower beds and leafy gutters.” This proves the theme because Jose is seen as a seasonable worker, He likes hands-on. He looks up to the act of doing work.

Next, Jose’s parents are role models towards Jose which persuades him to keep going and never stop which also connects with the theme. For example, in the text, it states, “Jose’s parents were hard workers. His mother came home with pierced fingers from the sewing machines,” and his father spent his days climbing splintered, sun-cracked poles.” This quote from the text, better held with the theme because even though the things his parents were doing, they still pushed through, which also made Jose out his mind on doing hard work. “He believed in hard work.” This also very much explains the theme because Jose is highly influenced by being engaged with doing work. Stated in the text it states,” Jose asked his father, “what do you see up there? His father replies,” Work, I see many years of work.” This explains the theme because Jose learns that a hard worker is not as negative as Jose thought. He is only gonged to get better. “I see years of work, migo… “life is hard.” … he felt destined to labor.” This explains the theme because in the beginning his parents seemed bad about working but soon realized they need to do hard work to let Jose have a roof under his head.

In addition to, The theme also reveals when the two boys are being compared. In the text, it states, “The author states, “Hi, Arnie, Jose says without much enthusiasm. He didn’t like his cousin. He thought he was lazy, and worse, spoiled by the trappings of being middle class. His parents had good jobs in offices and showered him with clothes.” This explains the theme as well because Jose found his cousin as not such a good worker and thought he wouldn’t get anything finished. A quote from the text to support this is, “… Except -you know – the work. , get out of here, Jose replies. This explains the theme as well to because Arnie sees doing work with Jose as just Jose working but Jose offers to do more work then Arnie (70/30). Jose knows he is going to have to do more work than possible because he agreed to do more work. This tells the theme because Jose is not only a Hard worker but is a “Born Worker.” “he stayed quiet for three minutes, during which time Jose scrubbed. His arms hurt but he kept working with long strokes. Jose knew that in an hour the sun would drench the pool with light” This explains the theme because Jose knew that he was going to get done and even though he didn’t want to do it because his arms hurt, he kept pushing forward which tells the theme of being, “whatever you put your mind to, it’s possible.”

Squeaky like running she run in lots of occasions and she always win. squeaky hates gretchel while also gretchel was her competitor, on the day of the race squeaky wins the race but she understands that she can do lots of things besides racing. There are some distinctions and similarities between both stories, Born Employee and Raymond Run. The language in both stories were in the colloquial (language is spoken daily) it remained in colloquial so it can assist the reader imagine squeaky as an African American girl and her attitude that was not appropriate for some people in Raymond Run story. While likewise in Born worker story the language remained in colloquial so the reader can imagine the poor person Jose and his dog’s life, and how kind he is since he always care to do ideal thing unlike his cousin Arnie he cares about credibility. typically colloquial language are utilized in both stories so it make the characters appear real and make the story more to reality.

The theme in the both stories were different in Raymond Run story the theme was don’t under estimate other so in “Raymond Run” story squeaky thought that Raymond cant run and he’s a special need but then she realizes that he can run so don’t underestimate others and in Born worker the theme was Responsibility and human obligation so in “Born Worker “story Jose was responsible of his family and he went work so he can get some money because he is in a poor class while also the theme in Born worker story was human obligation because Jose help Mr.clemens when he falls in the pool and his head cracked.

In a conclusion I want to say that I learned many things from those two stories I learned to be responsible and we must not judge the book by its cover and I liked those stories because they make me learn new things and the make me more aware how people live and how people can do anything just to get money . 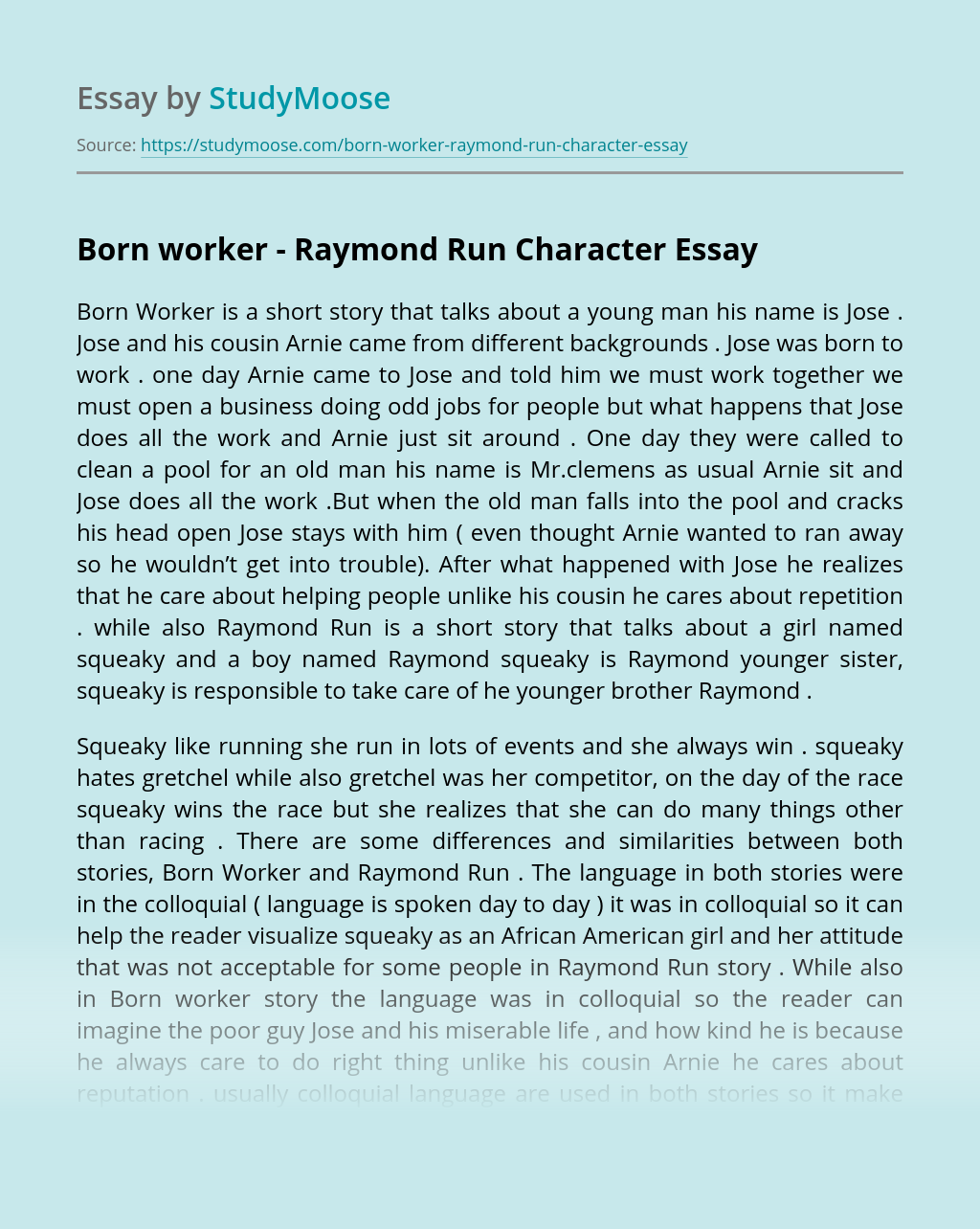