I. Type Of Story

Matilda is a children’s novel by British author Roald Dahl. It was published in 1988 by Jonathan Cape in London, with illustrations by Quentin Blake. The story is about Matilda Wormwood, an extraordinary child with ordinary and rather unpleasant parents, who are contemptuous of their daughter’s prodigious talents. Matilda was adapted into a film in 1996, a two-part adaptation for BBC Radio 4 (later re-broadcast on BBC Radio 4 Extra) starring Nicola McAuliffe as Matilda and narrated by Lenny Henry and a musical in 2010.

Don't use plagiarized sources. Get your custom essay on
“ Book Review Matilda ”
Get custom paper
NEW! smart matching with writer

Matilda is an excellent book by the famous author, Roald Dahl, who also wrote “Charlie and the Chocolate Factory”, “James and the Giant Peach”, and “The Twits”. Matilda is on the Premiers reading challenge and its ID is 252. It is about a young girl called Matilda, who is five years old and she can multiply enormous numbers like nineteen times fourteen, read adult novels like “Great Expectations” by Charles Dickens and many more amazing things, she even has special magic powers.

Unfortunately for Matilda her mother and father underestimate her, treating her like a scab. The children hating head mistress is even worse, she believes her parents, disbelieves Miss Honey, refuses to put Matilda in year six where she belongs and denies being a child once herself. Read this book to see how Matilda and Miss Honey get rid of the foul Miss Trunchbull.

The parents of the five-year-old Matilda Wormwood have no interest in their daughter, but if they did, they would have discovered that she is incredibly gifted.

A child prodigy, Matilda taught herself to read at three years old, though the only actual books in the house were a cookbook and magazines. When she asks for a real book for herself, her father rudely turns her down and tells her to watch television instead. In spite of this, Matilda looks up the address of the local library, where she finishes all the children’s books within a short time, thus leaving her to read adult novels, which she really enjoys. The librarian gives Matilda her own library card, and she is able to borrow books to read at home.

Matilda Wormwood is the main character in the story, and of the Matilda characters she is (by far) the most likable. At the beginning of the novel, we are introduced to Matilda as a 4 1/2-years old who possesses an intellect far above her years. Dahl even goes so far as to describe her as a “child-genius and prodigy.” (p. 75) Matilda loves to read even though her parents refuse to allow any books in the house – instead preferring that she and her brother simply watch the television. Later in the story, it is revealed that Matilda also possesses the powers of psychokinesis (the ability to move things with her mind) and it is implied that these powers are a result of the repressed anger she feels toward her parents and Headmistress who vacillate between ignoring and belittling her. By the time Matilda enters Crunchem Hall Primary School she is 5 1/2-years old.

Michael Wormwood is Matilda’s older brother. Although he does not posses the same level of intellect or ability as his sister, he is clearly the favorite in the Wormwood household. Mrs. Phelps is the local librarian who encourages Matilda’s love of reading. Mr. Harry Wormwood is Matilda’s father. Harry is also a used car dealer, and right from the start of the book we learn that he is a dishonest business man. He puts sawdust in his customers’ cars to make them sound better and runs the cars backward to turn back the mileage counters. Instead of praising his daughter for her abilities, he constantly tells her that she is “ignorant and stupid.” (p. 29) In fact, when Matilda correctly adds several large sums in her head and presents the answer to her father, he calls her a “cheat and a liar.” (p. 55)

Mrs. Wormwood , Matilda’s mother, is described as a “large woman whose hair was dyed platinum blonde except where you could see the mousy-brown bits growing out from the roots.” (p. 27) She also “wore heavy make-up and had one of those unfortunate bulging figures where the flesh appears to be strapped in all around the body to prevent it from falling out.” (p. 27) Mrs. Wormwood’s only interests are watching American soap-operas and playing Bingo every day. Like her husband, Mrs. Wormwood thinks very little of her daughter’s unique abilities and often berates her. Fred is the young neighbor boy who lends Matilda his pet parrot.

Matilda later uses the parrot to play a prank on her family. Miss Jennifer Honey is Matilda’s teacher at Crunchem Hall Primary School. Miss Honey is young, pretty, mild-mannered and “possessed that rare gift for being adored by every small child under her care.” (p. 67) Later in the story, she becomes a great advocate for Matilda. Miss Truchbull is undoubtedly the most colorful in the cast of Matilda characters. The Headmistress at Crunchem Hall Primary School, Miss Trunchbull serves as the “head teacher, the boss and the supreme commander” (p. 66) who “insists on strict discipline throughout the school.” (p. 69) Dahl also describes her as a “gigantic holy terror, a fierce tyrannical monster who frightened the life out of the pupils and teachers alike” (p. 67) who “hardly ever spoke in a normal voice.” (p. 85) Instead, he says she “barked or shouted.” (p. 85)

Miss Trunchbull’s favorite form of punishment is to send students to the “Chocky,” which is a “very tall but very narrow cupboard” that has a floor “only ten inches square so you can’t sit down or squat in it” – forcing one to stand, instead. Furthermore, “three of the walls are made of cement with bits of broken glass sticking out all over, so you can’t lean against them.” Leaning against the door is also impossible, because it has “thousands of sharp spikey nails sticking out of it.” (p. 104) Much later in the book, we learn that Miss Trunchbull is also Miss Honey’s aunt Agatha. Lavender, Nigel, Ruper, Eric, Wilfred and Hortensia are Matilda’s friends and classmates at Crunchem Hall Primary School. Amanda Thripp is another classmate.

She makes the mistake of coming to school wearing her hair in pigtails. Miss Trunchbull despises pigtails, and so she uses them to pick Amanda up. Using her Olympic hammer training, Miss Trunchbull swings Amanda around over-head and throws her clear across the school yard fence. Luckily, she “landed on the grass and bounced three times and finally came to rest.” (p. 116) Bruce Bogtrotter is yet another of Matilda’s classmates who suffers under Miss Trunchbull. This 11-year old boy commits the crime of sneaking a piece of the Headmistresses’ “special” chocolate cake.

During his confession, Bruce admits that he found the cake, baked by the school’s cook, to be “very good.” (pp. 122-123) As his punishment, Bruce is forced to eat every last bite of a duplicate cake which was “fully eighteen inches in diameter” and “covered with dark-brown chocolate icing.” (p. 124) Mr. Trilby is the Deputy Head of the school who, at the end of the book, is appointed Head Teacher in Miss Trunchbull’s place. Miss Plimsoll is Matilda’s teacher once she is moved to a higher grade at the school. 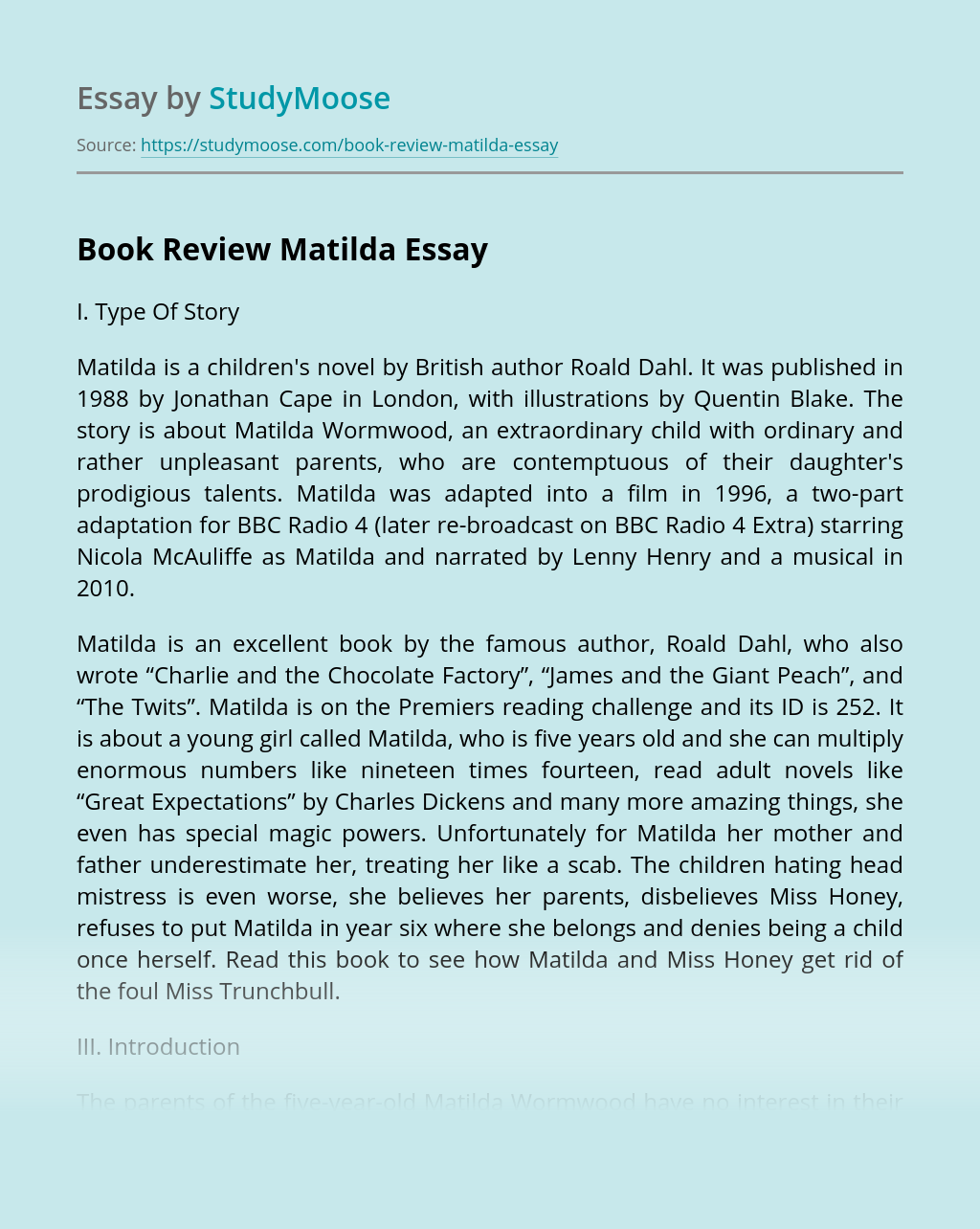