This book, written by Kristiana Gregory, is about a thirteen year old girl from Pennsylvania, Hattie Campbell. On her birthday, she was given a diary by her mother and her Aunt June. In the first entry, she mentions her Uncle Milton’s death three days ago while fixing her family’s barn and his funeral the eve of her birthday. At the funeral, the coffin fell out of their cart and was washed into the nearby river. Her father tried to save it but was almost sucked into the paddles of a riverboat.

As a sign of apology, the riverboat captain agreed to give Mr Campbell and his family free tickets on his riverboat to go anywhere they wanted. That night, he announced that the family would be heading to the untamed West, at that time occupied by the Indians who were known to be violent. Mrs Campbell was very angry and initiated a “cold war” with her husband. Two days later, she relents and agrees to head out West.

On the way out West, the family met a young adult named Tall Joe, who eventually becomes the captain of their group. Throughout the long trip, they lost many partners as their oxen died or they were shot by Indians. One day, Hattie and her friend, Pepper, are out playing and happened to stumble across what they thought were wild carrots and parsnips. They took some back as it was their turn to cook for the group. Back at camp, they got around their chores and started cooking.

A little girl, Cassia, looked longingly at the “carrots and parsnips” and takes two bites before running off to play. Later, as they were rolling out pastry, they heard screams.

They went in the direction of the screams and were horrified to find Pepper’s twin brother, Wade, and some of his friends lying on the ground, jaws clenched so tightly that nobody could pour charcoal and water into their systems to absorb the poison. In the end all of them except Wade died. The women were able to pour charcoal into his mouth. Hattie’s father then went to the tent where the kitchen was. When he saw the “carrots and parsnips”, he asked Hattie to cut some for him. He put it on the edge of his tongue and spat it out immediately. He said that it was actually water hemlock, a poisonous plant which could kill a horse if it just ate one. A man would die from a bite. They immediately remembered Cassia. They found her limp body and buried her together with the boys. The priest prayed over their graves. The next day, they called all the children and drew on the dirt to show them the difference between water hemlock and wild carrots and parsnips.

Eventually, after twenty six months on the road, they reach their destination, Oregon. Along the way the accompanying Aunt June gave birth to a daughter, River Ann Valentine. The family, Aunt June and her husband settled in Oregon and became one of the first pioneers to make it to their destinations. 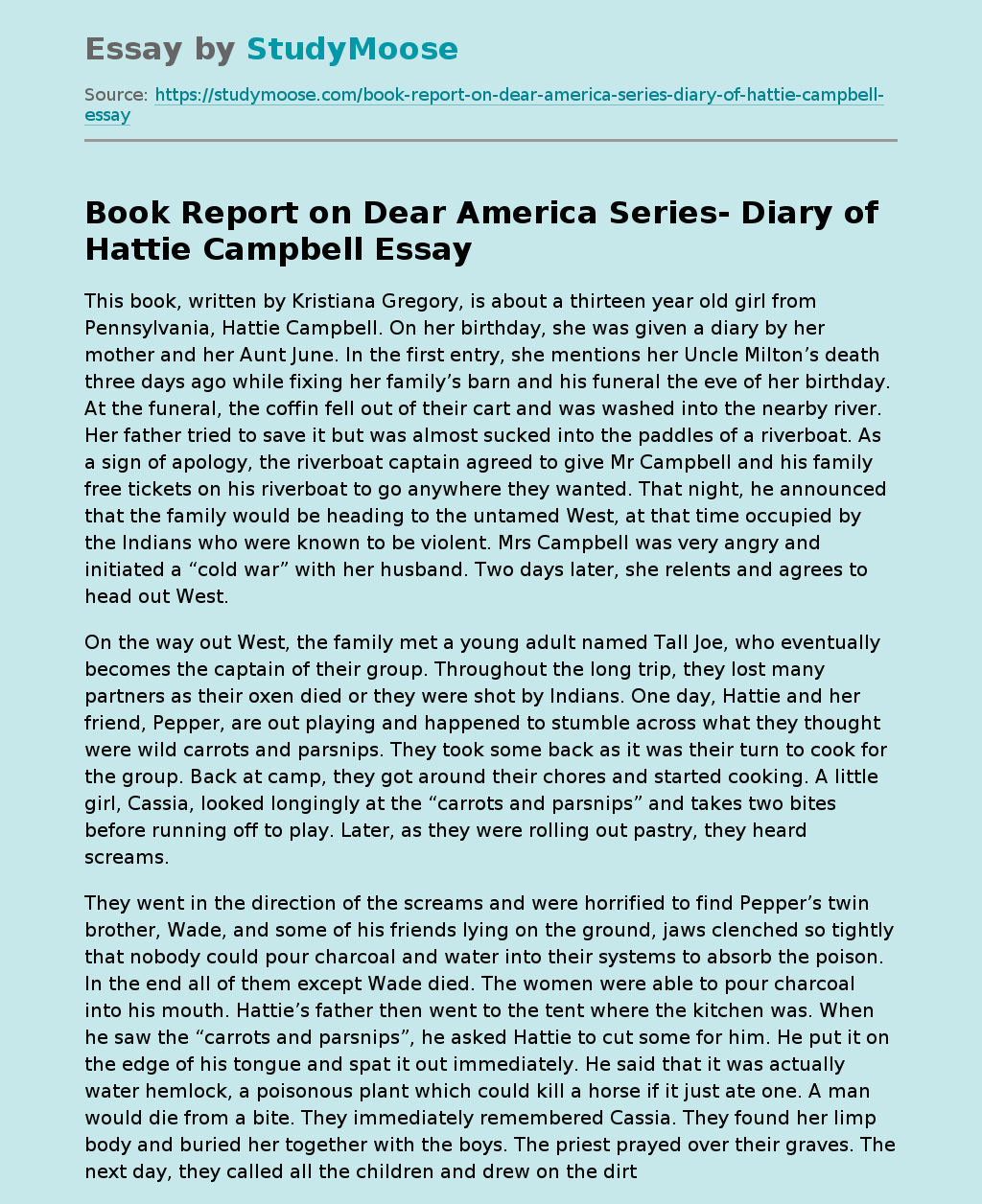