In aphra Behn’s Oroonoko, the reader encounters many themes at play such as love triangles, slavery, British Colonialism, race, gender and betrayal. The latter of these themes prominently permeates through this narrative on different levels. The main character of the story was Oronooko the prince, despicts a person of power. This story teaches many different life lessons on trust and betrayal. In Oronooko many betrayals occur because of complete trust in one another. Oroonook’s character embodies a magnificence nobody else can come closer to.

Don't use plagiarized sources. Get your custom essay on
“ Book Report on Aphra Behn’s Oroonoko ”
Get custom paper
NEW! smart matching with writer

He possesses insurmountable dignity in addition to the content of his physical characteristics. He had only left him for his successor one grandchild which was sent into the fields to be trained up by one of the oldest general war from his natural inclination to arms and the occasions given him, with the good conduct of the old general, he became at the age of seventeen, one of the most expert captain and the bravest soldiers that ever saw the field of Mars, so that he was adored as the wonder of all the world and also known as the darling of soldier.

Although a man of such a magnitude of character, Oroonooko is ignorant to what true betrayal was, ignorant to love, ignorant to beliefs and pain to others. This ignorance of his, is inevitable as Aphra Behn’s description of Oroonook’s society is a community that values truth, honor and honesty above everything else. Thus his trust in others an innocence cause his betrayal three times; when the king takes Imoinda Oroonooko’s lady love as a wife behind his grandson’s back, then the desception by the sea captain in Coramantien, And finally by Byam, the betrayal which ultimately seals his fate.

In the story the first instance of betrayal against Oroonooko’s is done by no one other than his own blood which is his grandfather. Although he knows of his grandson’s attachment to Imoinda, the old man cannot help him and falls instantly in love, send Imoninda the royal proposal she cannot refuse. Imoinda pleads and tell him of her binding promis. She told him, as she was a maid, how proud of the divine glory she should have been, of having it in her power to oblige her king, but as by the laws she could not, and from hisroyal goodness would not take, from any man his edded wife, o she brlieved she should be the occasion of making him commit a great sin if she did not reveal her state and condition, and tell him she was another’s and could not be happy with his. Her heart clearly belongs to the prince.

Once the king realizes that she was not truthfully in love with him, he contemplated on wheather to kill her or subject her to a life of slavery. In doing this he realize that b selling her into slavery and telling Oroonooko that she was put to death there would be a more peaceful outcome. Oroonooko’ had so much trust for his grandfather and believed he would do nothing to hurt him.

Meanwhile, his grandfather robbed him of his one true love in a simple form of betrayal. Again treason is done against him when Oroonoko is trying to forget his forlorn love and is tricked by an English captain aboard his ship and taken prisoners. Apparently thoughtful but dishonest the captain promises on his honor, to realease Oroonooko’ in the neat port-of-call. Instead, he sells him in Surinam to an English man who takes him to his plantation. He tricked Oroonoko and his men onto the boarding the ship promising them freedom that never came.

Before Oroonooko was betrayal by Byam the Governor of Surinam who had him whipped and put to death or Tuscan who helped Oroonooko organize the slave revolt, Oroonoko betrayed his own people by capturing them and subjecting them to a life of slavery and given them away as gifts to his beloved ones. The daughter of his foster-father, the dead general, and to make some excuses to her, because his preservation was the occasion of her father’s death, and to present her with those salves that had been taken, as the trophies of her father’s victories.

Norton Oroonooko is a perfect example of a slave leader for his people, he expressed the struggles for freedom during slavery. After his betrayal and being captured into slavery he built strength and motivation to try and overcome his struggles. Once a powerful, Oroonooko has exeriences both of these extremes. In one instant, Oroonooko has the freedom to decied the fate of others, and provoke fear in others and now lacks the ability to decide his own fate. After arriving to the colony, Oroonooko is not treated as a typical slave.

The British want to exploit his educational background, excellent hunting skills and his ablility to communicate with his people. In the beginning, he gladly accepts his position and stays in good conduct; because of the imminent promise that he will be returned to his motherland and his accidental reunion with Imoinda, who happens to be on the same sugar plantation. After a period of time and being swindled for such a long time, Oroonooko has become a rebel. He is frustrated by the empty promises of his freedom.

Duped, cheated an outwitted, Oroonoko decides to regain his freedom by taking his life as well as his wife and unborn child. This resolution is vividly described by Behn as follow: “he told her his design, first of killing her and then his enemies, and next himself, and the impossibility of escaping, and therefore he told her the nescessity of dying. He found the heroic wife faster pleading for death that he was to propose it, when she found his fixed resolution; and on her knees, besought him not to leave her to prey to his enemies. Behn 44)

Oroonoko endures a repetition of betrayals that unfortunately leads him to contemplate homicide, infanticide and suicide. Overfilled with pain, remorse, and suffering, Oroonooko seems incapacitated to carry out his plans to kill Imoinda and his unborn child, Byam and take his own life. In an article by Khary Polk expresses that: Oroonoko does not have his primary life changing encounter until his wife becomes pregnant. The realization that his child will follow the condition of the mother and be enslaved jolts him out of his classist ideology.

He, like the rest of the Africans was enslaved because he bore black skin. Oroonooko realized the insignificance of black social status.. (Polk 17) Throughout the novel, Imoinda supports her husband’s decisions, even if it involves losing her life. Imoinda shows great love and compassion for her spouse. She trusts him with all her heart and agrees to escape the terror of slavery. Oroonooks informed Imoinda “His design of firt killing her and then his enemies, and next himself and the impossibility of escaping, and therefore he told her the necessity of dying”.

She agrees to his plan because she trust her husband and knows he will do what he says. After taking her life he did not go after his enemies let alone take his own life. Oroonooko betrays his wife posthumously as he sits by her side for eight days not fulfilling the promis he made to her. He is accused of murdering Imoinda, tortured and dismembered. While Oroonooko believes that he is acting with the best intensions when he kills Imoinda, there is a betrayal of trust between two lovers. Imoinda bravely and willing gives her and their unborn child’s fate in her lovers hand.

Oroonooko on the other hand is feeable and to avoid his distressof experiencing agony of his family being enslaved along with him he finds refute in taking their lives themselves thus betrays his beloved. Imoinda’s murder by him leaves devasting consequences for Oroonooko as he realizes that in killing her he has killed himself too. Distraught by the terror and grief, Oroonoko tries to take his life as well. A thousand times he turns the fatal knife that did the deed towards his own heart, with a resolution to go immediately after her; but dire revenge , which now was a thousand times fierce in his soul than before, prevents him.

Oroonoko could not resolve to take his own life in order to join together with the women who gave him his identity. The acts of betrayal done to him triggered anger in him those consequently lead to rebellious reactions . The scene of his death at the end of the story illustrates “he had learned to take tobacco; and when he was assured he should die, he desired they would give him a pipe in his mouth, ready lighted” by doing this he shows another form of betrayal.

The act of smoking is a form of betrayal simple because he is following a tradition of his masters; the people who tricked him into a life of slavery. The description of Oroonoko ‘s death in the end of the story if tragic; his death represents trust and the lack of it. One can deduce that betrayal, it can have many roots. 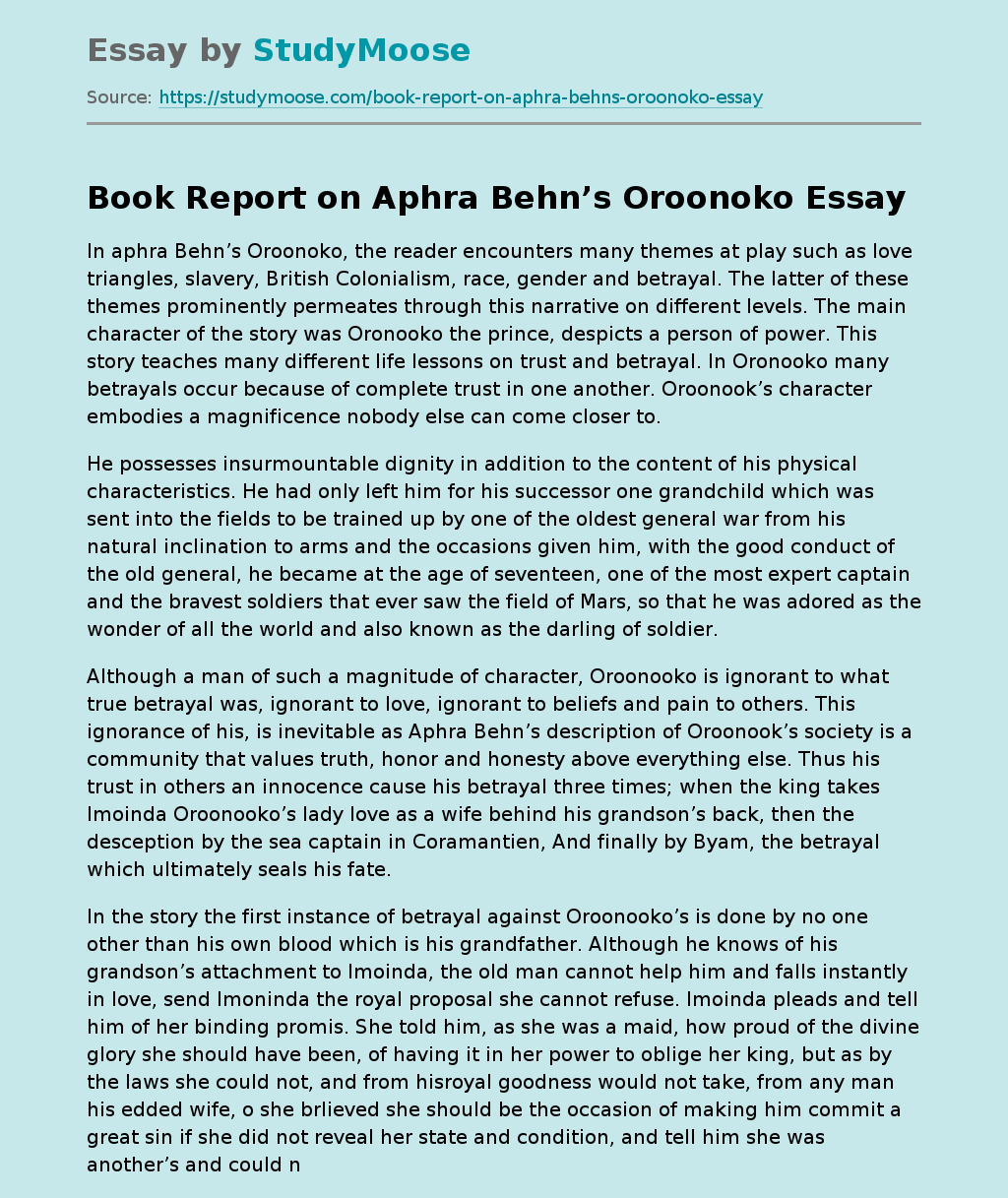