Book Report "Life at the Bottom"

Life at the Bottom is a group of self-written essays by psychiatrist, doctor, and writer Theodore Dalrymple. These self-written essays are mostly about moral obligation, the mindset of society, and the difficulties of the underclass. The book is mostly about what life is like living in the underclass. The title of the book says that in a simpler way. The word bottom in the title of the book is meaning the underclass. In this book, Dalrymple is describing the poverty around England and explains the things he has seen and heard from the patients in the hospital ward he worked at.

Don't use plagiarized sources. Get your custom essay on
“ Book Report “Life at the Bottom” ”
Get custom paper
NEW! smart matching with writer

The main ideas in this book consist of how a single person’s perspective on life influences their very own behaviors and the feelings of everyone about them. The book also explains the reasoning and view of social determinism. In one part of this book, Dalrymple is walking from the hospital that he works at to the prison that is close by to the hospital with other doctors that he knew. As they were all walking to the prison, they could see along the way that there were piles and piles of shattered glass all along the gutter.

This was because of people breaking into cars and stealing what they could for themselves. The author also talks about the houses on the way to the prison being decent, but the yards to the houses are just full of garbage. He compared the garbage-filled yards to garbage dumps because of the amount of garbage in each yard.

He then goes on to say to the other doctors that he has walked to the prison four days a week for nine years and has never seen anyone even try to clean up all the garbage in their yard. Some of these people have plenty of time on their hands to tidy up their yards, but they don’t have the interest in doing it. In the second chapter of this book, it starts out by saying that one of the hospital wards that the author had worked at was used for people who had poisoned themselves by overdosing on different things. Dalrymple then goes on and talks about six specific patients that were in the ward the day before. He talks about who these people were and what they did to end up in the hospital ward. The first patient was a young woman who had taken her overdose after her ex-boyfriend punched her. Her injuries consist of a black eye and noticeable swelling on her forehead. The next bed holds an older man who is a graduate of the ward.

The first time, he took the pills because his own brother had died. This time around, he was taking the pills because some people were smashing his windows, so he got out his gun and had shot one of them. He doesn’t want to go back home because of the dangers. Next, there is a young girl who had taken her stepfather’s anticoagulant pills. The next patient is a middle-aged man in his thirties. He had taken his overdose after he had grabbed his wife by the neck and pushed her against the wall. Another lady had taken half a bottle of methadone to guide her down from cocaine. In the final bed, there is an eighteen-year-old girl who overdosed because she said she hates life. The author says that he will most likely see some of the same things the next day.

I sort of liked this book because it explained in a way that we are all responsible for every single action we take throughout our entire life. I think that this is very true and that everyone should listen to this throughout their entire life. This book is a good example of this because the patients that the author deals with in the hospital have done some things in their lives that have led to where they are now. If they were interested in having a good life and succeeding, then they probably would have done something to help themselves earlier in their lives. I liked this book partly because it gives an insight into what the underclass was like in England during these times. I had no idea that poverty and life in the underclass were this bad in parts of the world. Whenever I had thought of poverty and the underclass before, I would think of people living in countries or parts of countries that are undeveloped or developing. I’ve never thought of people that are described in this book as underclass people, but I guess I just didn’t keep up on this topic.

Was there anything I learned in reading this book? Yes, of course. Almost every book I read, it seems that I learn something, either something big or just a small detail. I got an inside view of what it was like in a ward in a hospital that the author had worked at. I was able to visualize and comprehend what his job consisted of and how he went about doing it. I’ve never known what it was like in a hospital ward, but the author told it in a way in which I could almost know exactly what was going on. I also learned more about poverty and the underclass than I had known before. Another thing I learned was that the police in England in the year 2000, didn’t always charge criminals when they probably should have been. For example, when a patient is admitted into the hospital and then assaults another patient, the police go to the hospital, but don’t do anything because they think that they should not be charged with anything because they are a patient at the hospital.

The police think that being a patient at the hospital means that they are suffering from something psychologically and that they belong at the hospital and not in jail. I just can’t believe how the police acted in these times. They sometimes charge and arrest the person who didn’t do anything at all and let the person or group of people who did something bad go free. This is totally wrong, and I can see the author’s disliking of the police and their decisions.

Book Report "Life at the Bottom". (2021, Dec 03). Retrieved from https://studymoose.com/book-report-life-at-the-bottom-essay 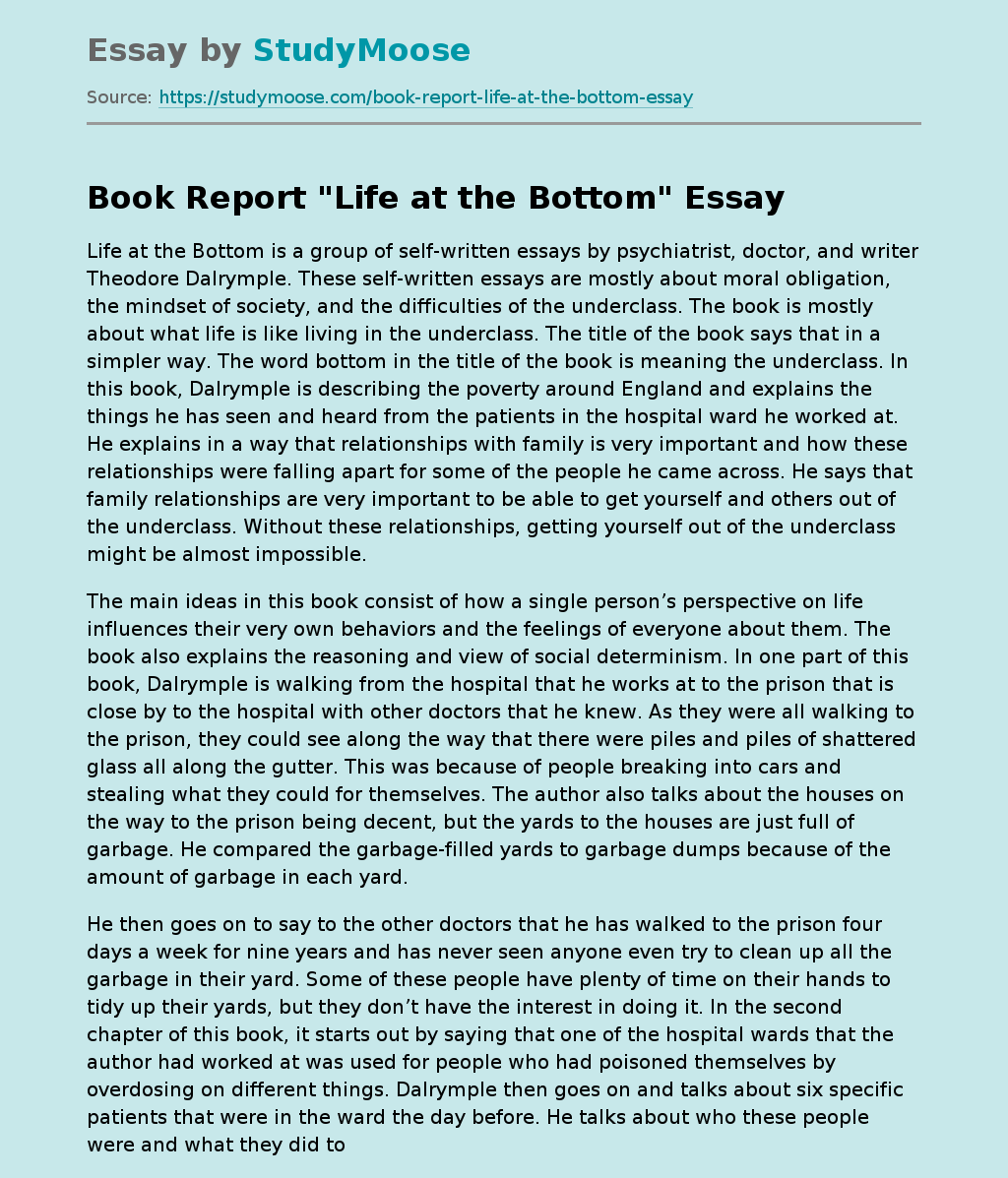