How does Dickens create characters that are both memorable and striking? Pay particular attention to chapters one and eight and refer to at least three characters. This term we have been reading a book by Charles Dickens called ‘Great Expectations’. It has been very interesting to read, especially since Charles Dickens makes his novel extremely descriptive as he makes each one of his characters unique and different. In this essay I will be discussing how Dickens creates characters that are memorable and striking.

Don't use plagiarized sources. Get your custom essay on
“ ‘Great Expectations’ by Charles Dickens ”
Get custom paper
NEW! smart matching with writer

I will not be looking at characters through the whole book, just chapters one and eight.

Describing the characters with interesting detail

I will be looking back at the story and picking out parts of the book, that Dickens has used to describe his characters with interesting detail, that create wonderful images in your mind that are striking, and will stay with you forever. The narrative style of this book is written in the first person. We know this as Dickens uses phrases such as, ‘I know’ and ‘ I said’.

By doing this we also know that the main character Pip is telling us the story. This is a very effective way of writing and makes it not so dull to read. We learn a lot about Pip in the first chapter, by him telling us about his background etc.

We learn his name, about his family, his background, like where he is from and where he lives. In the first chapter, we learn to love Pip. We notice that he is a good child, who has had a very bad childhood, and he just wants to be loved and cared about.

He is a very innocent child for his age, but on the other hand he has been through a lot that makes him more aware. By writing in the first person there are many advantages, but then there are some disadvantages as well. Advantages, are such things like, you have intermasy with the characters. You can hear about their feelings and what is going on through their minds.

You can learn a lot more about the character feelings, which makes the book quite personal. Almost like reading some bodies diary, which is a great effect. Also, while writing in the first person, our approach to the dialogue is different then if it was in third person. Another good thing, is that you do not have to use speech marks for ‘I’ when writing in first person, only when another character is speaking do you have to use them. However, there are some disadvantages to writing in the first person as well, one of which would be, the book becomes a little more predictable, as you know the outcome of the story.

We know that the main character will still be around at the end of the book, as he is telling the story. Another one, is that it is much harder to talk about other characters, as the first person only sees things from his eyes, where as if it was written in third person the writer can see from all angles. Although, in my opinion after reading books in the third person, and also in the first, I would have to say that I prefer reading them in the first person. It makes the whole book different and interesting, you feel like you know the characters. It is a very effective way to write.

The setting of the story has a very big affect on the audience’s view of the character. The setting creates a mood, which will relate to the character that is there. Such as, The setting of Chapter one is vital for creating an impression of Magwitch. The setting is ”bleak” which helps to emphasise the cold and threatening atmosphere. It is in this hostile landscape that we are first introduced to Magwitch. Before introducing us to this, harsh, violent character, Dickens created a mood of fright and wariness. Setting a dreary, scary looking marsh creates this.

Dickens description of the marsh creates a wonderful image of it, we can tell that something bad will happen out there, he just prepares you, and creates the mood. This makes it more exciting to read, and gives a sense of fright. The setting does have a great affect on the character; it helps to describe the character, by where they are and what they are doing there. Another example would be the description of the setting of Miss Havisham’s house. Before introducing us to this strange bizarre lady, Dickens sets the scene by describing the even stranger environment that Miss Havisham lives in.

He describes the house clearly, which sets a mood of confusion and interest, wanting an explanation for this spooky house. The house is a character on it’s own, it has background, memorable characteristics and a story within. Setting is a must have to make a story good, it makes the book more interesting and sets the mood of the character. Dickens does this wonderfully, I’ve never read a book with such detail of the setting, but it makes the reader look at the character in a whole different light. Miss Havishams house is a big part of the story, and is defiantly a character in itself.

It is not just a house; Dickens uses it to show us something. The message from the house is that you can not stop time. He shows us this by, even though Miss Havisham as stopped the clocks and left everything in its exact place, it does not stop things from rotting, decaying, ageing. You can never stop time altogether, no matter how hard you try, nothing will ever stay the same, that is what Dickens is trying to say by using the house. The characters are also described very particular. Each one has a completely different description and personality, which is really good.

Dickens chooses the words he uses to describe characters carefully, making sure that it gives of the right impression of the character. For example the first description of Magwitch is un-forgettable, the language used creates and exact image of him in your mind. He starts of by saying ”A fearful man”, this is a great way to start the description, because already we have got a good idea of how this man is going to look with his body language which is a good start to how they are going to act. Dickens then continues with such phrases like, ” who limped, and shivered, and glared and growled.

” This line gives us an amazing picture in our head, by just using a few simple words. It is the way that Dickens puts the words together, like putting a jigsaw together. This tells us what kind of man Magwitch is straight away, from this we can tell that Magwitch was fearful about what he was doing, however was still not doing something right. By the way he said he was shivering we get the impression he has been out for a long time, and the fact that he glares and growls tells us that he is not always so pleasant. Another great description of a character, would be Miss Havishams.

Her description starts off with; ”She was dressed in rich materials- satins, and lace, and silks- all of white. ” This tells us that she is quite rich, as she can afford rich materials like that. ”She had not quite finished dressing, for she had but one shoe on- the other was on the table near her hand- her veil was but half arranged. ” This bit is crucial, it tells us something is definitely not right with this women, it makes you want to read further to hear more about this strange lady. Her whole description is incredible, and you get a clear image of her.

While describing things, Dickens uses long sentence structures, which give you a lot of information at once. Pip the main character, as got different relationship with each one of the characters. They all fit together; he has many opinions on each character. Pip, has great feelings towards Estella, he loves her dearly, from the moment he meets her until the end of the book. When he first meets her, one of the first thing he says about her is ”I think she is very proud, I think she is very pretty, I think she is very insulting”. From the start he has feelings for her, but realises that she is not feeling the same way about him.

He thinks that she is very proud, which he probably judged based on the way that she talks and moves. Pip also has a lot of feelings about Magwitch. Pip is very scared of Magwitch, which is why he does what he is told, because he is petrified of doing otherwise, in case Magwitch did something unpleasant to him. On some level I think that Pip does also feel sorry towards Magwitch, he is risking a lot by getting Magwitch food, if people were to find out he would be in a lot of trouble. So, I do think that Pip thought that Magwitch deserved food, and felt guilty to do other wise.

Miss Havisham and Pip have a very strange relationship. I think Pip just feels that he is at Miss Havishams house to please her, almost like it’s his job to be there with her. He grows to love her as the story goes on, and at her death Pip is quite upset. He likes Miss Havisham as she brings him closer to Estella; she talks to Pip about her, which Pip enjoys. Pip is unaware of the fact that Miss Havisham is trying to use Pip to get back at men. He does not see her as a mean, strange, old women. He is fond of Miss Havisham, and is sad when he learns he can’t go back to see her any more. 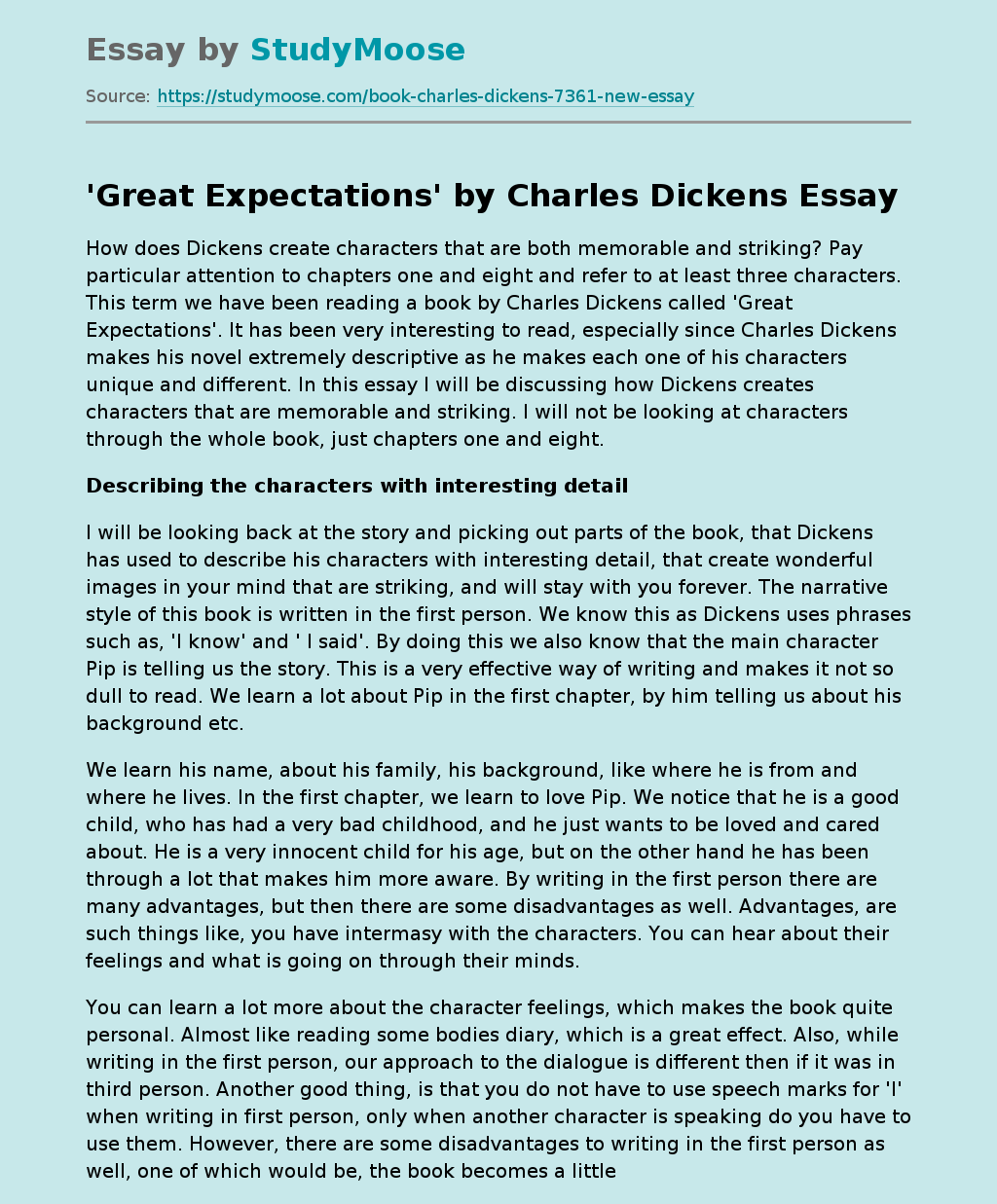