Body Image vs Self Esteem

According to Merriam Webster’s Dictionary, diet is food and drink regularly provided or consumed. It is also defined as the regimen of eating and drinking sparingly so as to reduce one’s weight. The latter definition will be the one used for this research paper. Currently, up to fifty percent of women have tried dieting at some point in their lives and at least 90 percent of teenagers diet regularly. Due to this, the “diet fad” is worth billions with its government, pharmaceutical, and weight loss agencies funding it.

Don't use plagiarized sources. Get your custom essay on
“ Body Image vs Self Esteem ”
Get custom paper
NEW! smart matching with writer

see more:a handout that explains the link between identity self image and self esteem

Americans alone spend more money on weight loss programs and products than any other nation. People go on diets for a number of reasons. One reason is their concern for their health. Many people who live a healthier life are geared towards a restricted diet and lifestyle due to medical reasons. Second reason and probably the most common is to achieve a better body image.

Even though it is more of a personal evaluation there are several factors that can influence how we perceive our bodies. One factor that can shape one’s body image is culture. Different cultures have different definitions of what they consider beautiful or ugly. For example, a culture would consider a girl with many tattoos as beautiful which could then bring about a positive body image.

On the other hand, other cultures would label women with tattoos as impure. Another factor would be the influence of the media on body image. It can either heighten positive body image or aggravate it.

Standards of beauty are often defined by what we see on magazines and televisions. People are often exposed to images of “perfection” that it sends messages that this is how men and women should look. The pressure to achieve “physical perfection” causes people to be unsatisfied with how they look. Due to this, teenagers often go on “fad diets’ to improve their negative body image. Teenagers would normally compare themselves to models which contributes to low self-esteem and heightens body image issues. This could eventually lead to depression, loss of self-esteem and eating disorders.

A negative body image develops when the person feels that he/she doesn’t match up to society’s or even his/her personal standards of beauty. This causes people with negative body image to be often dissatisfied with how they look. According to Kathryn Yarborough (2009), “there are two main types of body image disturbances: distortion and dissatisfaction. ” Distortion is when we have inaccurate visual perception of ourselves. For example, anorexic people still feel fat despite being underweight. People get dissatisfied when they cannot find contentment with how they look.

These body image disturbances are what affect emotional and mental thinking. Victims of negative body image always feel self-conscious with no self-confidence at all. This causes their self-esteem to be naturally low. With this in mind, we want to evaluate the relationship on how body image affects the self-esteem of people. Self-esteem is defined as how a person values him/herself. This is more concerned on your personal opinion and how you respect yourself. Good self-esteem enables a person to exude a more positive outlook in life.

According to Yarborough (2009), “studies indicate that regardless of actual attractiveness, the better the person feels about him/herself the higher his/her self-esteem will be and vice versa. ” Self-esteem may also be defined as a ratio of a person’s success against his/her failures. When success gets the majority of the ratio, a person feels good about him/herself. A poor body image is classified under failures. In turn, self-esteem is hindered greatly by poor body image. There is a thin line between body image and self-esteem but one greatly affects the other.

Body image becomes a major factor in having a high or low self-esteem. In improving your body image, you are unconsciously creating an “ideal self. ” According to Brennecke (1978), “as we gain more experience with life, we begin to develop an image of what we wish to be: our ideal self. ” He also stated that this is largely affected by culture, family, friends and media. In many cases, our ideal self can be unrealistic and hard to attain. These high expectations cause people to fall short on their image. As stated above, people usually prefer dieting as their key solution to improve their body image.

Based on personal interviews, people are not always happy with the results of their dieting. Most of them are tempted by the food they try to avoid. Some of them don’t get contented with the results because it wasn’t what they were aiming for. This is because dieting is tricky. At the start, their metabolism slows down and during this transition, they lose weight easily. Once their bodies are used to the new di et pattern, losing weight will be difficult. Going back to their old eating habits, they gain weight easily because their bodies got used to eating little amounts. In conclusion, diet may or may not help a person’s body image.

Whether we know it or not, having a positive image is crucial in developing a healthy mental, physical and emotional attitude. But we strongly advise people to improve their body image with methods other than dieting. According to Kienlen (2007), “Different people will find different tips helpful when it comes to building a healthy body image. Focusing on their positive qualities is one of these tips. Building a better body image means dwelling on your strengths. Another tip is to not spend too much time thinking about the flaws that peers point out. Sometimes it causes them to overlook their positive qualities.

Lastly, being comfortable is always the best tip. People can put aside all their negatives when they are carefree. ” This can fall under cognitive therapy where the person can restructure his/her thoughts to alter the negatives. As the author mentioned, one good way to treat body disturbances is to highlight and bring about the positive image of every individual. Strengths are under success. Its magnitude can be magnified by focusing on these strengths and in doing so; the success versus failure ratio might favor the success more. This rule also applies for people’s negatives, which goes under failure.

By not pondering upon them, they are not magnified to favor the failures. According to Brennecke (1978), “your evaluation of your own self-worth is dependent on how close you come to your ideal self. If you’re meeting that image, you will experience self-esteem- that is, you’ll feel good about yourself. ” In response to this, Judy Lightstone (1999) suggests that people should also be realistic about their ideal self that taking in mind genetic and environmental history. Apart from the mental aspect, it is important to take into consideration the physical aspect as well.

Having a healthy diet and exercising regularly is also one step in achieving a positive body image. Research shows that while we exercise, our body releases endorphins—the body’s feel good chemicals. It boosts up our mood and improves how we tackle daily tasks. Exercise and endorphins are strongly linked to good mental health as well. To sum it all up, there are a number of ways to change how we think and perceive ourselves. It is dependent on the person and if he/she chooses to improve his well-being. Most of the discussions aforementioned are geared towards improving body images.

The improvement of body image is key in achieving a healthy outlook in life, mentally, physically and emotionally. It is important because, as emphasized, it is closely related to self-esteem. Based on psychological tests, self-esteem greatly affects behavior, development and a person’s capability to make decisions. According to a study made by the Indiana University Medicine Media relations, statistics show that 40 percent of girls with low self-esteem versus 18 percent of girls with high self-esteem have tried sexual intercourse even before ninth grade.

Hayers and Fors’ study (1998) report that low self-esteem is a common precedent to premarital sexual relationships which then could lead to unplanned pregnancies. They also found that as self-esteem decreases, sexual behavior becomes more prominent. Another test based on Candito (1996) concluded that those who were classified as “recovered alcoholics” pointed out that they have suffered from low self-esteem and marked it as their most significant problem. Kaplan (1975) conducted studies on 7,000 seventh graders and found that violence and crime holds a close link to low self-esteem as well.

There are far more intriguing studies about the effects of self-esteem to oneself but based from the studies mentioned above, we can all see how pressing the issue of low self-esteem is. It is alarming and it is definitely something that should be acted upon immediately. In conclusion, we believe that one step in improving low self-esteem and avoiding all its bad effects is to first improve body image. It is through correcting how we see ourselves and choosing to improve our wellbeing will we then live out a happier and more fruitful life.

Body Image vs Self Esteem. (2017, Jan 03). Retrieved from https://studymoose.com/body-image-vs-self-esteem-essay 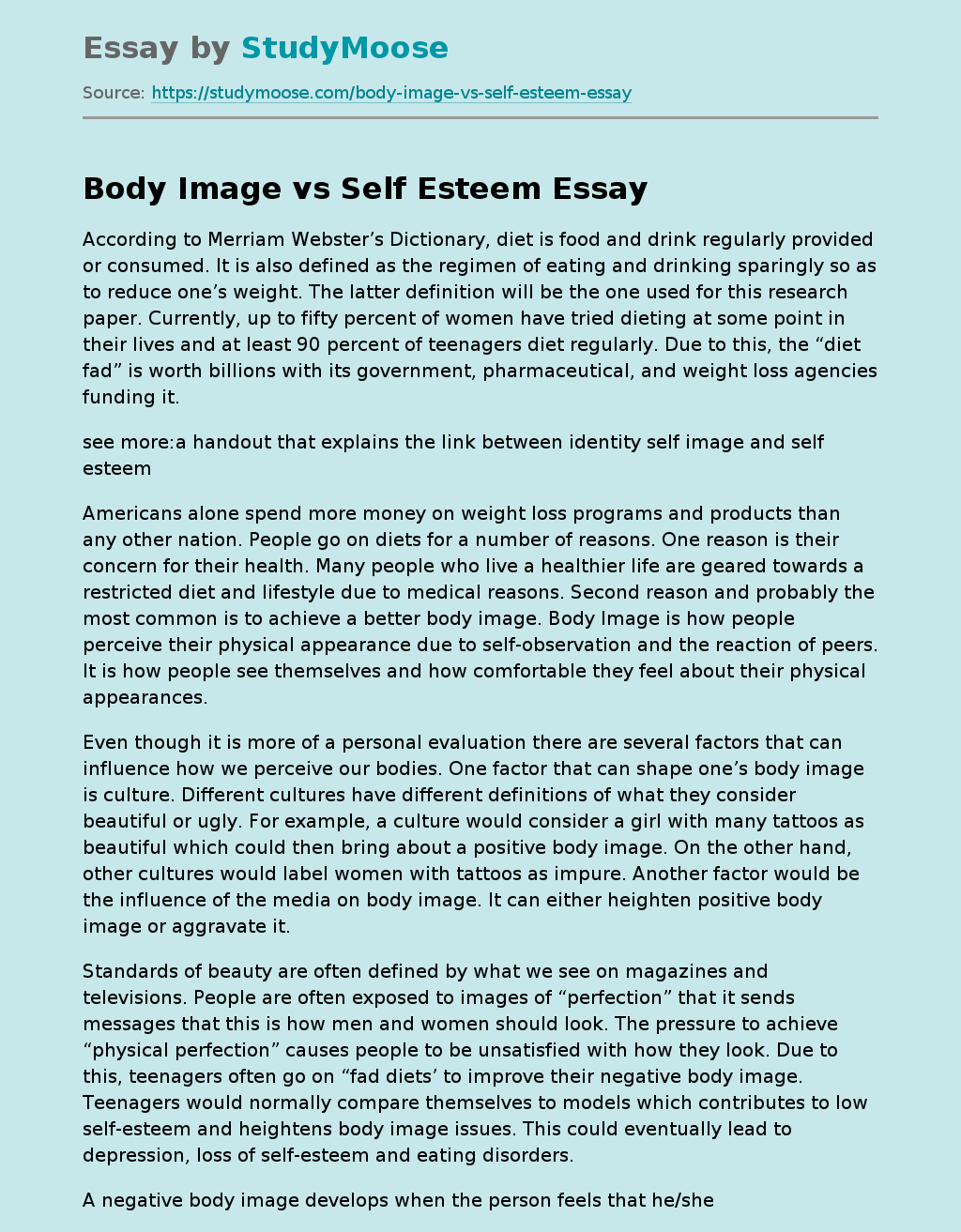