“What is the message behind ‘A Christmas Carol’ and how does Dickens convey it? ” Dickens wrote a Christmas Carol with the intentions of drawing reader’s attention to poverty and to make people aware to it and to help. He did not write this book just because he wanted to write a ghost storey, even though it has some similarities. Dickens had very strong views on poverty, because of his personal experiences.

When Dickens was 12 his father was sent to a debtors prison, which deeply affected him and therefore spurred him on to write books like David Copperfield but mainly A Christmas Carol because this was the book in which he actually put his point across and tried to open people’s eye to the poverty in Victorian England.

In this book Dickens very cleverly portrays that when people don’t give to charity etc that they will be the ones suffering afterward for eternity. This is aimed at the selfish people so that they can see that if they like Scrooge, do not change then will be the ones to suffer.

The message is portrayed mainly through the main character Scrooge who we follow throughout the book. Ebenezer Scrooge starts off in the beginning of the book as the miserly owner of a London counting house, a nineteenth century term for an accountant’s office. His temperament is cold, hard, greedy, selfish and so much more, but there is no warmth, love or happiness and appears to be nothing in fact, very good in him.

Dickens often used the weather to create atmosphere and personalities of people in this book. For example in Stave 1 Dickens used an excellent comparison with the weather to describe Scrooges personality before he saw any of the ghosts, in the beginning. The extract explains how, because Scrooge was so cold and bitter in personality that nothing could warm him or make him any colder. “No warmth could warm, no wintry weather chill him. No wind that blew was bitterer than he, no falling snow was more intent upon its purpose, no pelting rain less open to entreaty.

” Scrooge made him self an outsider, a loner with not friends from the way he behaved. ‘And solitary as an oyster. ‘ His cold, grumpy attitude is more than just a front; it goes deeper. For example “Even the blind men’s dogs appeared to know him; and when they saw him coming on, would tug their owners into doorways and up courts; and then would wag their tails as though they said, ‘no eye at all is better than an evil eye, dark master! ‘ And for dogs to sense it it’s like a sixth sense, which can’t be a front.

But that’s what Scrooge wants; he doesn’t want people fussing over him he just likes being left alone. “To edge his way along the crowded paths of life, warning all human sympathy to keep its distance…. ” He was not an approachable person that people wanted to speak to or even acknowledge ‘Nobody ever stopped him on the street to say, my dear Scrooge how are you? ‘ It seems to Scrooge that being a good person isn’t giving “idle” people money but working hard and being a hard working man and good at your job. Scrooge judged a ‘good’ person by how hardworking at their job they were and how much money they had.

However Scrooge was a very selfish man with his money. He lived for his work and was extremely hardworking, maybe too hardworking. Therefore he made a lot of money but spent the smallest amount of it possible, whether it was on himself or someone else even if it was friends, family or charity. He was so stingy with his money and was a great miser. For example he did not care that it was a freezing cold day and because he paid his clerk so little that poor Bob Cratchit couldn’t afford enough clothes to keep warm from the terrible cold winter’s day outside.

Bob Cratchit worked long hours to put food on the table for his family as well as his crippled and sickly son, while getting paid an appalling wage. Scrooge would not let Bob Cratchit have more than one lump of coal, even though he was freezing. He treats Bob Cratchit inadequately, with no appreciation or respect. Scrooge also makes Bob Cratchit work in very bad conditions; ‘in a dismal cell’ the clerk’s fire was ‘much smaller that it looked like one coal. ‘ So not only is the clerk made to work in a horrible dingy room, but in the freezing cold. 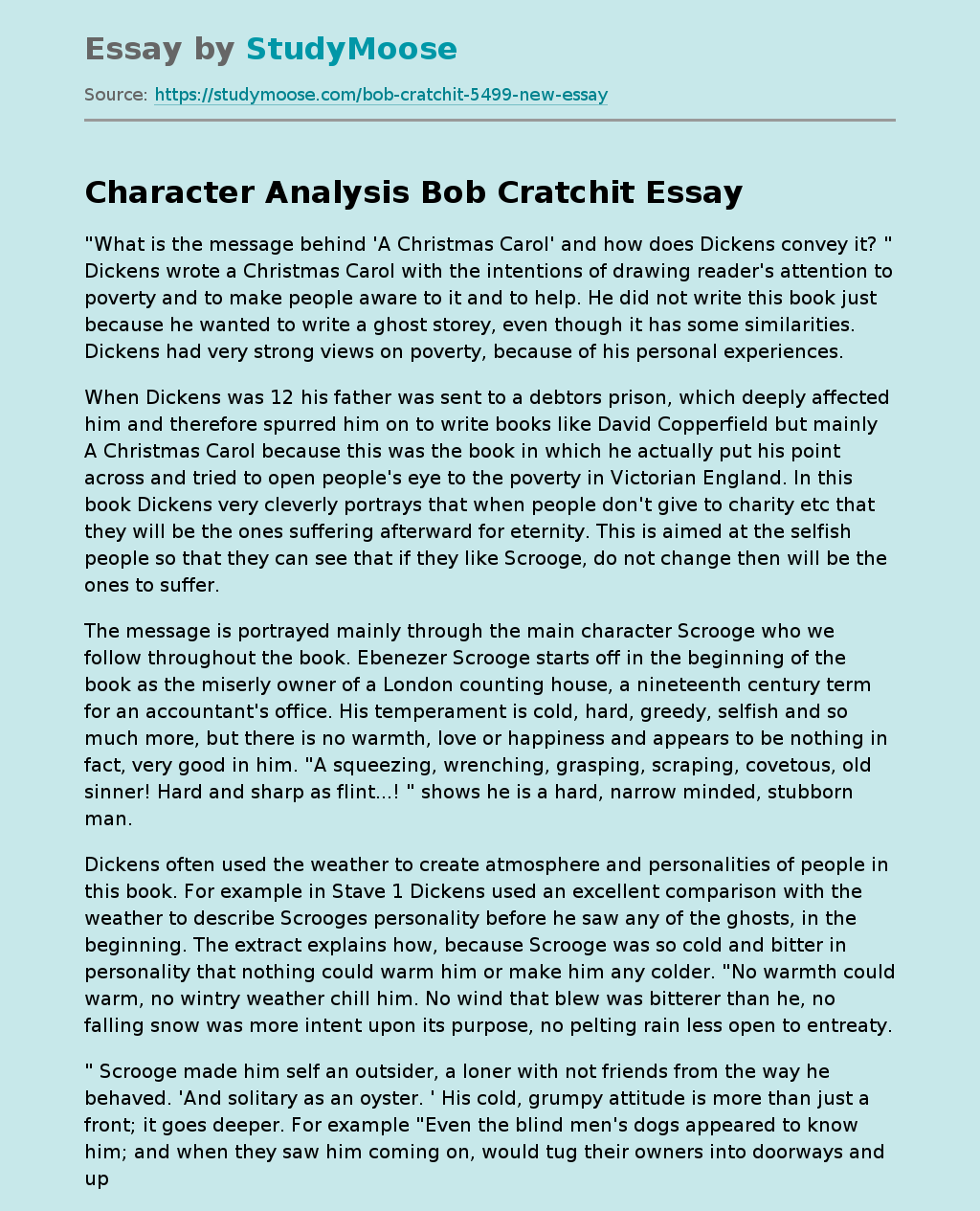