My Practical in October 2004 was a piece of scripted work and was for option 2. We showed this in the style of physical theatre. My group and I performed a section of the play “Blood Brothers” which was set around the 1960’s in Liverpool and was written by Willy Russell. The main themes behind this play are superstition and family values.

I will compare and contrast “Blood Brothers” to another play of a similar method called “Blue Remembered Hills” and is also written by the same person.

The play starts off with a young lady, not very well off, called Mrs Johnstone who has seven children and two on the way. However she can only afford to look after one more child otherwise the social services will take some of her children away.

Well in the end she is persuaded by her boss, Mrs Lyons, to let her keep one of the babies, but Mrs Lyons doesn’t want the children to grow up knowing about each other due to a superstition and therefore shuts Mrs Johnstone and the other baby out of her life.

Later on in the story the two children meet (not knowing they are brothers) and become close friends, but Mrs Lyons doesn’t like the fact that her child could find out about his real mother and that he has a brother and decides to move out to the country.

Throughout most of the show the two brothers keep meeting and form a strong friendship between nevertheless the bond between them gradually breaks down as they become older and eventually they take their separate ways.

My input towards this performance was as the part of Mrs Lyons. Mrs Lyons is a very wealthy lady who turns out to be quite mad and superstitious. I really enjoyed playing this part, as I felt it was a much more serious and profound role to play.

“Blue Remembered Hills” is about how children keep themselves occupied during the Second World War. It shows us what its like for children in a poor area of the country.

Throughout many parts of this play you see children just getting themselves into mischief and coming up with various imaginative games to keep themselves engaged and because they don’t have the money to buy nice toys.

“Blue Remembered Hills” doesn’t really relate to “Blood Brothers” in the sense that both the plots are the same, but it is similar for both stories use the same method and have the same background and up bringing.

Both “Blood Brothers” and “Blue Remembered Hills” have poor background and therefore the children have to come up with their own way of amusing themselves. Both plays do this by having the children play made up games and just acting like typical kids when they get themselves into a little bit of mischief.

Furthermore another similarity is that both plays use adults to play children although the adults play children all the way though “Blue Remembered Hills” where as “Blood Brothers” only has adults playing children for a segment of the play.

A major difference between the two is that they both have different story lines and are set at different eras.

The last difference is that “Blue Remembered Hills” doesn’t really have a culture connected to it, but “Blood Brothers” does. It was based on the culture of Christianity because of when Mrs Lyons gets Mrs Johnstone to make a promise by swearing on the bible. This obviously states that Mrs Lyons is a religious person.

To get into my role more I spoke to one of my mum’s colleges who is a mother of an adopted child. I asked her what it was like knowing that the child you’ve cared for and loved isn’t actually your blood related child. Also I asked her things like what would she do if her child suddenly turned round and said he wanted to find out who is real mother is and be with her.

During our conversation I realised that sometimes it can be very hard to care for an adopted child because you will always worry about them not loving you as much as you love them and whether or not they’re happy not knowing who their real mother is.

I feel that she helped me a lot to develop my character and create a vivid picture of what it would be like if I was in that situation.

Also it made me reflect about how I’d think and feel around the character of Edward and my emotions for when I found out that he knew about Mickey.

My character was a character of etiquette and importance. She always held herself high and was never seen untidy or upset that is until she starts to break down. To really pull this part off I looked at the relationship between Mrs Lyons and Mrs Johnstone at the beginning and tried to compare them to how they were like in the end.

I thought about what the major differences would be what things would be going through Mrs Lyons mind at the time. I feel that the most useful thing that helped me out in this situation was trial and error. I tried many different ways of portraying myself towards the other characters and the audience until I became satisfied that I had developed my character to its full potential.

In conclusion I believe that this has been a very good experience for me and that I have learnt to control my emotions within my character without going too over the top and have gained a better sense on how to become my character more when I perform.

This play was very enjoyable to read through and had a well written story line.

My only regret is that it would have been nice to have had longer so that we could have performed more of the play and then have gotten an enhanced insight on how to portray our characters.

This was yet again another fine opportunity to increase our skills on performing scripted work. 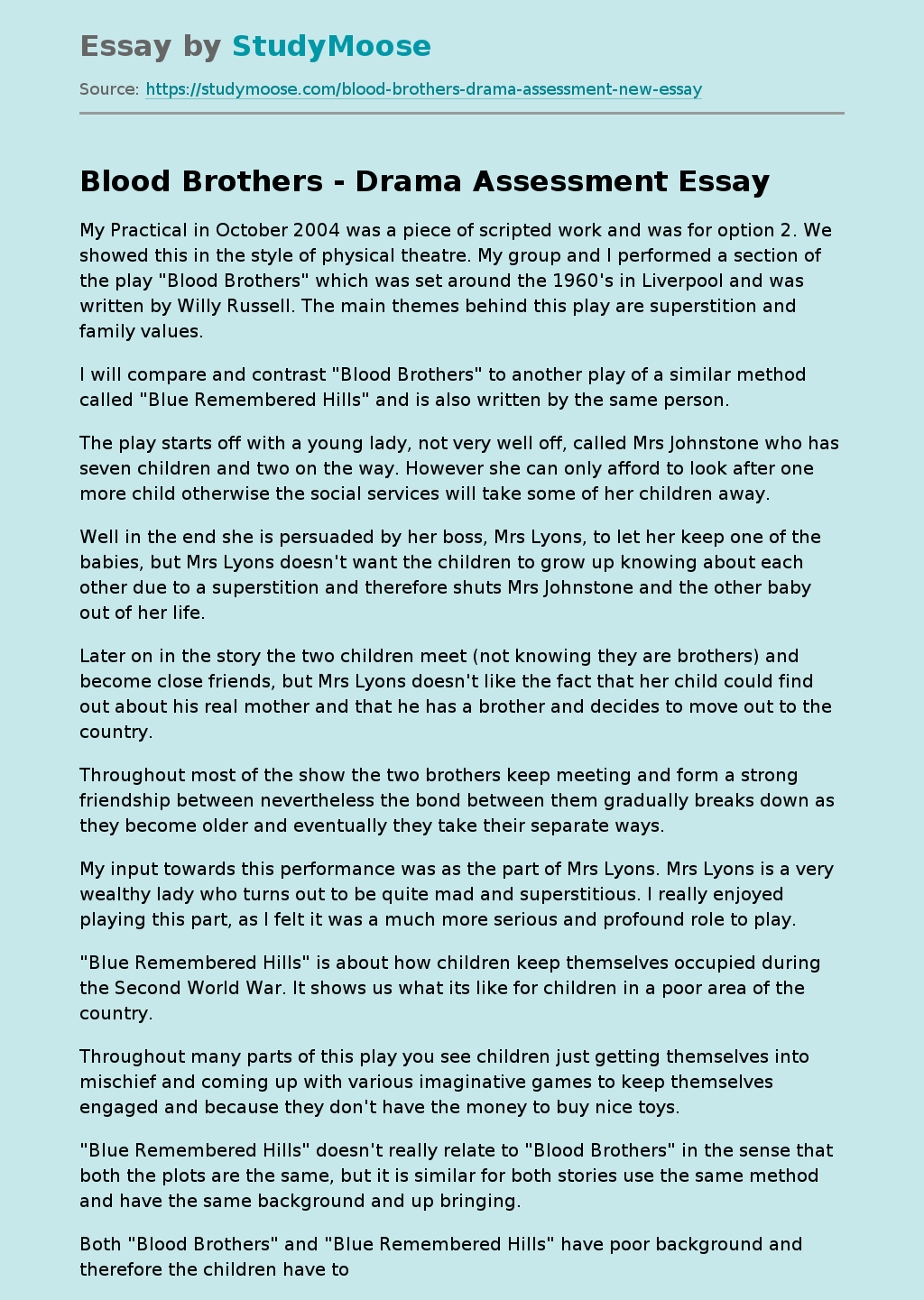