In this memorandum, I will analyze the competitive environment that Blockbuster and Netflix faced, state the key income statement and balance sheet accounts for each firm and use ratios (including DuPont model) to draw comparisons between the two firms in 2008.

Blockbuster is an American-based chain of VHS, DVD, Blu-Ray, and video game rental store that has over 5,000 stores in the U.S. The rise of online rental service providers such as Netflix greatly reduced Blockbuster’s market share.

Don't use plagiarized sources. Get your custom essay on
“ Blockbuster/Netflix Case Analysis ”
Get custom paper
NEW! smart matching with writer

As a result, Blockbuster re-launched its online rental service to remain competitive on the market. Blockbuster faced many risks in the past decade, leading to its sharp demise. The biggest risk that Blockbuster faced was the its massive infrastructure that makes implementing changes to meet the demands of the changing technological environment difficult. Furthermore, the operating expenses to sustain business were astronomical while business was declining. Thus, management faced pressure from creditors to cut costs in order to stay afloat.

Another risk that Blockbuster faced was its “no late fee” initiative that caused a costly buildup of inventory.

This caused cash flows and revenues to suffer, causing stock price to hit rock bottom, further risking the firm’s reputation as a firm worth investing in. However, its success lies in its well-known brand and important relationships with movie studios that rely on it as a major distribution channel and source of revenue. Netflix is an American corporation that offers both on-demand video streaming over the Internet, and DVD rentals through their website.

It does not have any retail stores and mainly operates over the Internet, making it a low-cost business. Its strategy involves developing a sophisticated movie recommendation system that caters to the taste of each customer’s preferences.

Netflix’s main rivals were Blockbuster, Wal-Mart and Amazon. Nonetheless, it has a patented low-cost business model that has led to roaring success. However, one of the risks Netflix faced was the “no late fee” as customers can hold on to the DVDs indefinitely. The “late fee’ can also be used to invest in better technologies and more sophisticated technology applications. Since Netflix has opened ten regional distribution centers in major US metropolitan cities, the cost of labor (to package and ship the DVDs) in those areas are higher. Hence the low-cost business model might be risked in the long run.

Expanding regional distribution centers in major US metropolitan areas so that customers receive their DVDs in the shortest possible time is a critical risk/success factor. Thus, property and equipment is a key balance sheet account and vertical analysis reveals that this account is 20% of total assets. Maintaining high levels of cash is also a critical risk/success factor as Netflix is in an industry that is highly liable to potential lawsuits. In addition, the firm needs sufficient cash to constantly develop its technology applications.

A key account is the property and equipment account because Blockbuster operates heavily through its retail stores. Therefore, the leasing and ownership of stores and warehouses constitute to 19% of total assets. Maintaining inventory level is one of the risk factors of Blockbuster thus inventory is a key balance sheet account, representing 20% of total assets. Comparison of Liquidity, Solvency, Profitability and Efficiency We will apply three different ratios, namely current, quick and cash ratio, to measure the firm’s short-term position. The current ratio for Blockbuster was 1 while the current ratio for Netflix was 1.67, indicating that Netflix is in a much better position to meet its short-term obligations.

However, this is not the case for Netflix. The financial leverage ratio for Blockbuster was 5.62 while the financial leverage ratio for Netflix was 1.67, indicating that Netflix is taking significantly lesser risks to meet its financial obligations. In order to compare the profitability of both firms, we will apply the gross margin and profit margin ratios to both firms. The gross margin of Blockbuster is 0.51 while the gross margin of Netflix is 0.33, suggesting that the percentage of total sales revenue that Blockbuster retains after incurring the direct costs associated with producing the goods and services sold by the company is higher than that of Netflix. However, this ratio does not paint a realistic picture of the situation because it disregards operating expenses.

In this memorandum, I analyzed the competitive environment that Blockbuster and Netflix faced, explained the key income statement and balance sheet accounts for each firm and used ratios (including the DuPont model) to assess and draw comparisons between the two firms in 2008. 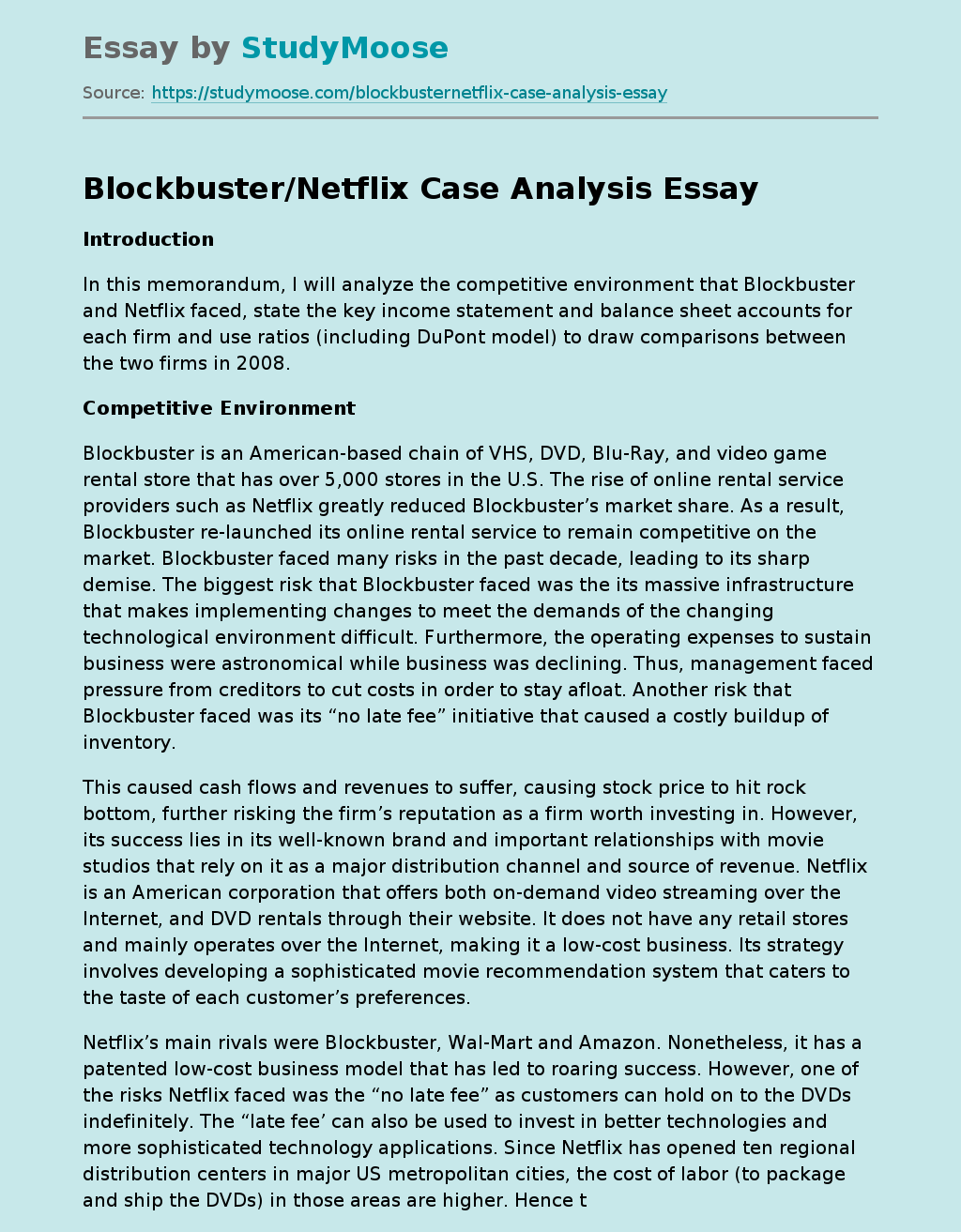