A Streetcar Named Desire suffers from living in a culture dominated by men, the human condition of desire and the insecurity and madness that follow; sexuality and her self-pressure to maintain self worth are the source of her cast off from society. The madness is launched when she loses her money, family, husband, job, and continues to lose her youthful appearance.

Blanche’s insanity can be deemed acceptable from the surface because of her losses, but the way in which Blanche handles her situation oozes insecurity and hints that the loss of sanity is inevitable in Blanche; her insecurity stems from her dependence on men and hergluttony to fulfill her whims which escalates to society’s lack of acceptance.

Don't use plagiarized sources. Get your custom essay on
“ Blanche DuBois in Tennesse William’s ”
Get custom paper
NEW! smart matching with writer

A true sign of extreme insecurity in Blanche is her creation of a false, dignified persona based on lies. She builds herself a world of fantasy to escape from the troubles that surround her. A symbol of this in the play is the paper lantern Blanche places over the “bare lightbulb” (Willaims 42).

She tells Stanley “It’s only a paper moon, just as phony as it can be – but it wouldn’t be make-believe if you believed in me! ” (Williams 100). The light bulb of the lamp signifies Blanche’s inner essence and the “paper moon” is the artificial personality she lays on top of herself. This is mainly in attempts to receive compliments and thus assurance of self from the men around her. She goes so far as to admit she was “fishing for a compliment” (Williams 89) from Stanley.

Blanche’s total inability to reassure herself is a piece in the puzzle of her impending madness, and a sign of the male dominated and run society of the 1950’s.

The human condition involves attachment and therefore desire; this is a major factor in Blanche’s regression process that she cannot control. Both Stella and Blanche desire freedom, beauty, love and most of all, sex. To satisfy her desire Blanche puts forth her sexuality. As her regression thickens she festers and does not know “how much longer [she] can turn the trick” (Williams 79) a fact that propels her insanity. Blanche’s encroaching on the young man and exclaiming “it would be nice to keep you, but I’ve got to be good—and keep my hands of children” (Williams 84) is one of the ignals of her desire to remain young and relive her teenage bliss, which also propels her downfall. Blanche pines for an escape from the financial and personal woes she has created for herself; the only road she sees to escape is with a man.

Blanche uses her sexuality to reassure herself and head for an escape. This is another example of Blanche’s inability to care for herself and to become accepting of her situation without a man in the picture. She says “I want to deceive him enough to make him—want me…” (Williams 81).

This statement from Blanche provides insight on her insecurity and dependence on a man to rescue her. William’s uses a dash and an ellipsis in her statement to create the uncertainty of her speech. Mitch and Blanche are not compatible but Blanch desperately seeks an escape from the difficult circumstances of her life. Even when Blanche is being taken away she refuses to listen to the Matron but says to the male doctor “I have always depended on the kindness of strangers” (Williams 142). Blanche’s final vision consists of a male taking her to safety—or rescuing her, because she cannot rescue herself.

This could be seen as rational, however, because the doctor is a licensed professional and Blanche has suffered through a difficult time. Blanche is in fact shrouded with insecurity and immaturity, but through her the loss of her plantation and job this could be deemed reasonable. She has nothing left in the world, and due to the time period the only way out she sees is with men. While she is floundering between her losses she turns to her sexual desires to keep herself afloat. Blanche could have handled her situation with more grace, but her madness could be seen as reasonable on the surface. 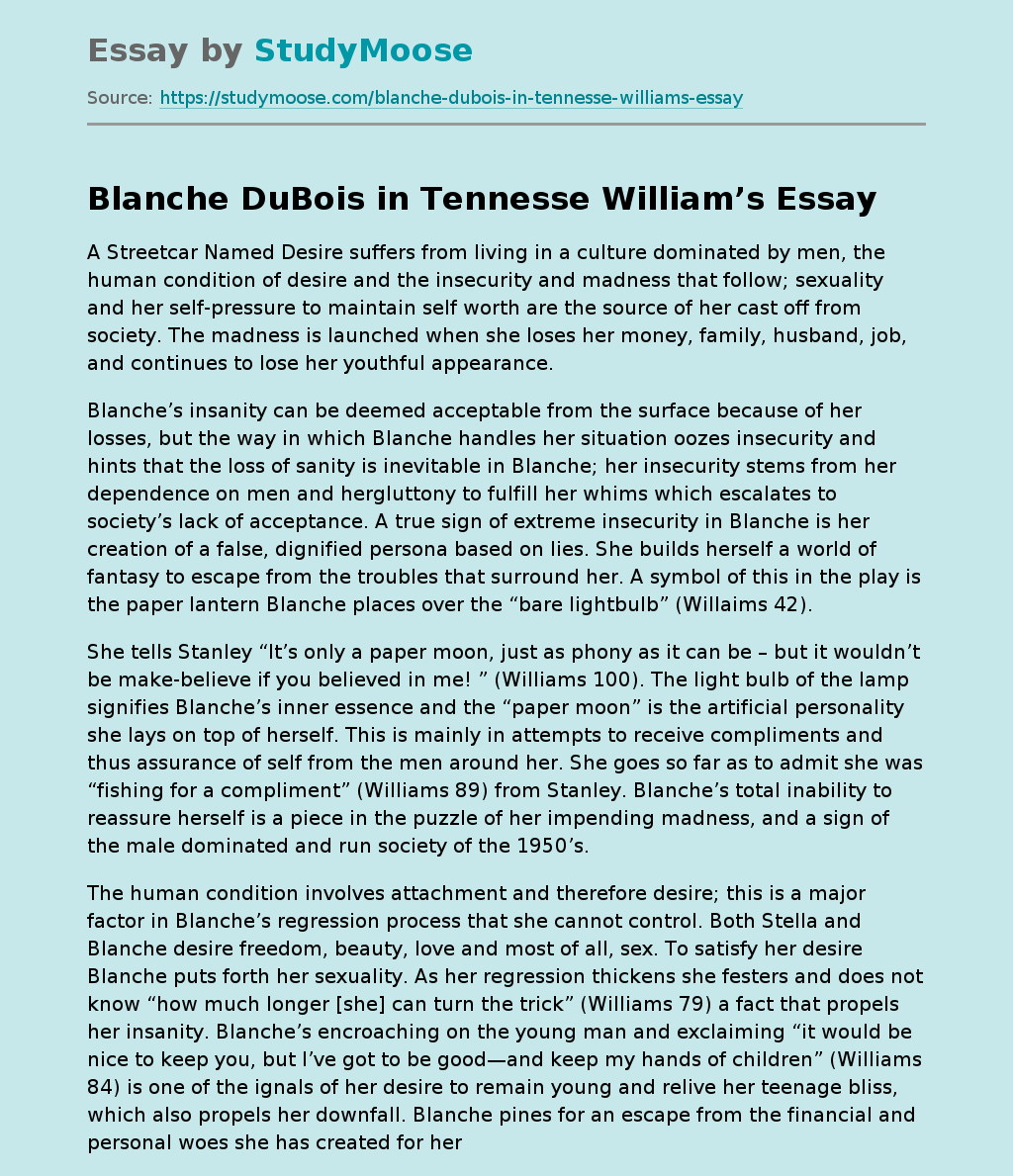