Blanche and Stanley in a Streetcar Named Desire

Blanche and Stanley, two characters of Tenessee Williams’ play A Streetcar Named Desire, represent two very conflicting personalities. Stanley, Blanche’s sister Stella’s aggressive husband, portrays strong tones of anger, rage, and frustration. However, although his behavior is without a doubt over-bearing and rough, in a way he displays realism and truth as well. On the other hand, the play’s true protagonist Blanche exerts enthusiasm, spunk, and elaborate nostalgia. These characteristics don’t really come out in a positive or attractive way, but instead verify her insanity near the play’s end.

Don't use plagiarized sources. Get your custom essay on
“ Blanche and Stanley in a Streetcar Named Desire ”
Get custom paper
NEW! smart matching with writer

Together, Blanche and Stanley represent true inner conflict, each in their own way, and the tension among the two is an exciting and driving force to be reckoned with. Stanley exudes the stereotypical “wife beater” husband of the 1930s. Dressed almost always in the era’s staple guiney-tee, his rash actions and aggressive episodes towards his wife are frightening to say the least. On the surface, he seems to despise the fact that Blanche is always around, intruding on his and Stella’s life together.

Multiple times throughout the play he throws a fit, destructing the kitchen table, bedroom, or whatever he can get his hands on.

His crudeness towards Stella is arguably a portrayal of his self-deemed superiority over women. However, despite his awful rage and somewhat abusive actions, Stanley amazingly represents a good trait as well. His morals are all about honesty, truthfulness, and realism. He really clashes with Blanche so much because she is so fixated on the past, and it drives him towards ultimate frustration because he’s such a realist.

Each time Blanche brings up a thing of her past, he fills with rage and goes off on one of his trademarked episodes.

Therefore, on the surface Stanley’s rough personality definitely is a tough wall to see past, but his actions really come from his “honesty policy”, and his realism. With that said, Blanche’s personality is uniquely opposite than the hard, rough, “real life” Stanley. Blanche is a beautiful woman of her mid-thirties who basically is experiencing a mid-life crisis a bit too early. Her “perfect life” comes crashing down after losing her young husband, estate, and money. With this, she can’t seem to really accept much in her current life, but instead lives through the past.

By living with her sister, Stella, she imposes intrusion without really realizing it on her and Stanley’s lives, and even though she could start over and create a life of her own, she can’t really let go and move on. She is even proposed by Stanley’s sensitive poker friend Mitch, but she refuses him. Mitch represented to me Blanche’s last glimmer of hope, and when she denies him in marriage, the rest is a downward spiral. As the play progresses from there on out, Blanche’s sanity slowly deteriorates more and more.

It becomes evident that she has a drinking problem, and liquor becomes her go-to aid for all mental problems she begins to have. One scene I found interesting was when she asked a young suitor who comes to her house to deliver something for a kiss. I felt in kissing this younger man she was testing her charm and lust skills, which she obviously believes to be useless and rusty, for lack of a better word. When the young man leaves and she quickly becomes embarrassed, it is established that she just isn’t the young girl she used to be, and that she must move on to make the most of what she is left with in life.

Blanche and Stanley in a Streetcar Named Desire. (2016, Sep 10). Retrieved from http://studymoose.com/blanche-and-stanley-in-a-streetcar-named-desire-essay 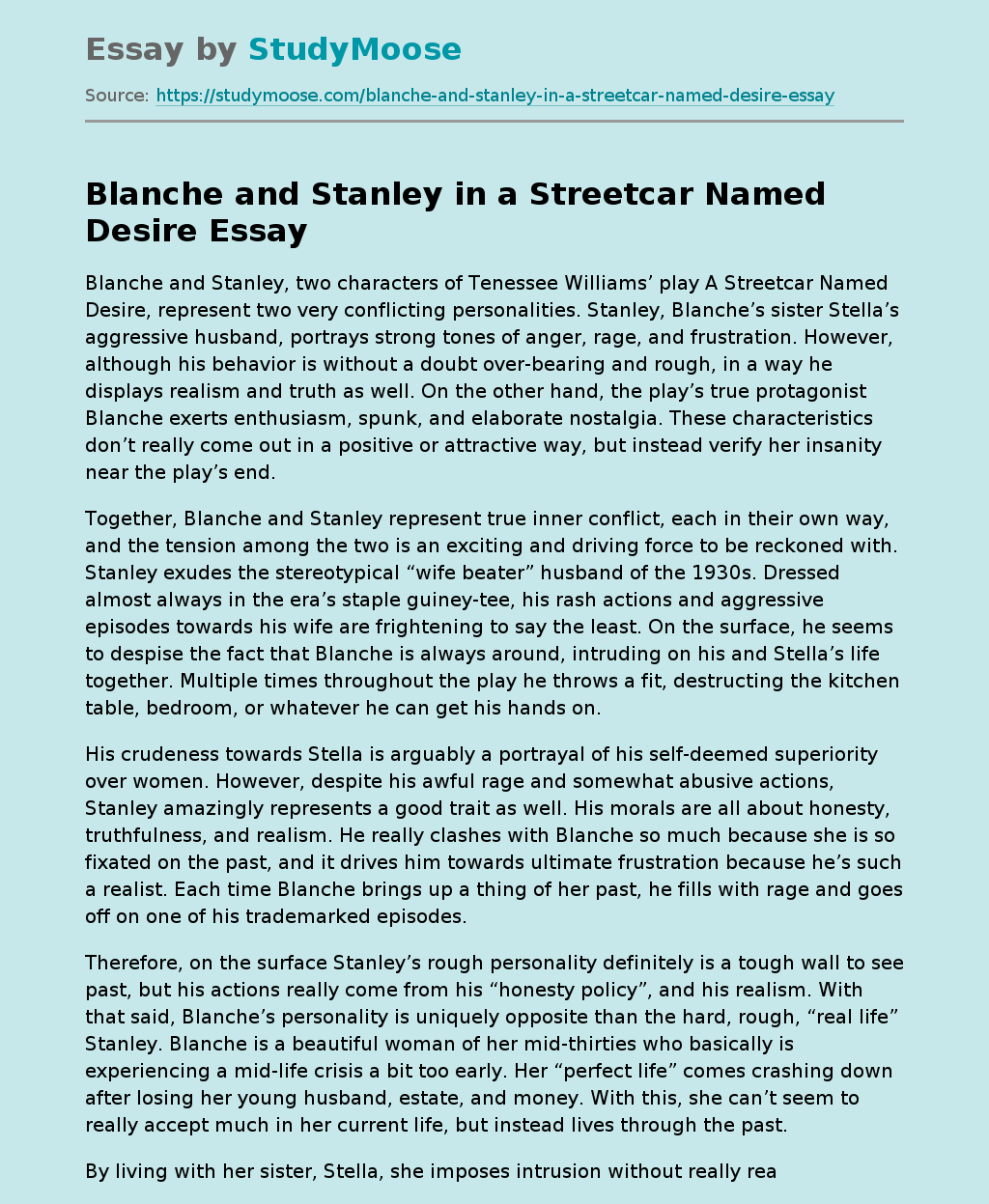