Seamus Heaney is an Irish poet who was born in Mossbawn farmhouse and spent fourteen years of his childhood there. Many of his poems are based on personal experience; ‘Mid-term Break’, for example, was based on the death of his younger brother; and are laid out in settings akin to those he is familiar to. His poem, ‘Blackberry Picking’, is set on a farm and explores the simple luxury of picking fresh, ripe blackberries, his inspiration quite possibly being his own childhood.

Thematically, the poem explores the idealistic nature of childhood, and the importance of waking up to reality as one grows older. The beginning of the poem is filled with a vivid passionate recollection of the seasonal picking of blueberries. The time is late August, and in perfect harvest conditions of ‘heavy rain and sun, the blackberries would ripen’. The idealistic views of childhood are brought out in the description of the berries, conveying a sense of near perfection, ‘At first, just one, a glossy purple clot.

You ate that first one and its flesh was sweet’. The memory of the blueberries is so vivid that Heaney recounts the ‘stains’ left upon the tongue and even the ‘lust’ felt for picking. There is a deep sense of indulgence conveyed in this first part of the poem, especially through the use of the word ‘lust’, which would otherwise not normally be used in describing the feelings of children. This passion for something as innocent as blueberry picking is something that can come only in childhood.

As the poem progresses, Heaney switches from showing a joyous, childlike recollection to a more wistful, longing tone of an adult whose younger days have passed. He conveys in this part the desperation to hold on to something good, ‘We hoarded the fresh berries in the byre’, and how holding on is never to any avail, as these ‘berries’ possibly used as a metaphor for anything that is almost too good, decay if held on to for too long.

This is when a sense of reality is setting in, and the poet is coming to terms with the fact that nothing can last forever, creating a stark contrast with the childish belief that good things never pass. The line, ‘I always felt like crying. It wasn’t fair’ ties up both, the childish reaction of crying when hit by the realisation that something good will not last, and the adult resignation to the fact that although it is never fair, such is life. On a more implicit note, the poem deals with the theme of greed and the dissatisfaction often involved in attempting to gain an object of desire. The attempt to acquire great amounts of this object by removing it from its natural setting and ‘hoarding’ it leads to its destruction and to the hoarder’s disappointment. However, it is also implied that lessons on greed are seldom learned, ‘Each year I hoped they’d keep, knew they would not.’ Even with the knowledge that his efforts would be in vain, Heaney writes about how he was compelled to try and store the blackberries each year, thus bringing out a recurrent greed for the same object.

The structure and language of the poem aid the reader in better understanding and connecting with it. The first part is merely a recollection that provides information; what time of the year it is, how the blackberries were collected. There is a lot of enjambment here, and this allows for a free flow of thoughts for the poet, as well as a better level of connection for the reader. This flow better creates the feelings and emotions of the poem, and allows the ideas in each line to flow into each other and create one seamless picture. The first stanza is peppered with adjectives quite liberally, which almost recreates the bursting sweetness of the blackberries on the tongue of the poet. The description of summer’s blood in the berries, and the lust for picking them conveys an extremely passionate feeling towards these fruits, a blood lust. The children, ‘scratched by briars’, are willing to suffer to gain possession of these sweet fleshed berries. In contrast, the second stanza contains lesser enjambment, and this restricts the flow of thoughts and ideas.

The realisation that the berries have decayed stands in stark contrast to the joy felt when picking and eating the berries on the fields. This realisation is almost jerky, and comes in spurts, unlike the continuous sweetness of the berries in the previous stanza. There are copious amounts of imagery throughout the poem, and this helps create clear, vivid images in the mind’s eye of the reader. The glossiness of the berries and the different colours are tiny details that one usually wouldn’t remember; this vivid recollection therefore establishes clear pictures for the readers. ‘Sent us out with milk cans, pea tins, jam pots’; this line creates a picture of children marching through the fields with just about any form of storage they could get their hands on in order to collect their beloved blackberries. The kids go ‘Round hayfields, cornfields and potato drills’.

This listing of different places recreates a mental image of the farm that Heaney describes; a place that is possibly close to his heart because it is where he grew up. Besides the visual imagery of the first stanza, auditory imagery is also present in the line, ‘Until the tinkling bottom had been covered’. This makes the reader subconsciously recreate the tinkling sounds of the hard berries hitting the tinned surfaces of the milk cans, pea tins and jam pots, which in turns make the poem even more tangible and lifelike. Although there is just about as much imagery in the second stanza as there was in the first, these images are unpleasant and dull. As opposed to the colourful descriptions given previously, the description of the hoarded berries as having a ‘rat-grey fungus (and a) stinking juice’ puts forth undesirable images of the previously sinful and sweet berries. Where the berries in the previous stanza boasted of succulent colours, they are now covered by a dull ‘grey’ fungus.

This contrast in imagery runs parallel with the contrasting themes of childlike passion and the adult realisation that nothing lasts. While the first stanza is colourful, bright and indulgent like the ideals of childhood, the second stanza is filled with more realistic imagery of spoil and decay that follows any over-indulgence, which is something that children, on becoming adults, are pushed to realise. The tone of the poem is joyous and passionate in the first stanza. The joy, however, is less to do with the eating of berries, which is mentioned just once ‘You ate that first one and its flesh was sweet’, than the picking of the same, which is mentioned multiple times. This conveys the childlike happiness felt in not just eating the blackberries, but also in the process of running through the fields and picking them, which almost seems like a ritual that happened every year. As opposed to the happy tone established in the first stanza, the tone of the second is desperate and resigned.

Filled with an adult perspective, there is a need to hold on to the sweetness of the berries, the richness of which is now dampened by the idea of the fungus forming on them. ‘It wasn’t fair’, this line conveys the resignation felt by all of us, and echoed by Heaney- the feeling that something isn’t fair accompanied by the realisation that we still have to resign ourselves to that fact because it isn’t going to change. On the surface, the poem ‘Blackberry Picking’ is about the simple joys found in little things like picking and eating blackberries, and the disappointment felt when they rot and decay. Underneath the surface, the poem explores the perfect ideals of childhood that are ruined by the mature realisations of adulthood. It brings out the contrast between the two, and reminds the reader that nothing perfect can last forever; just another hard reality of life. 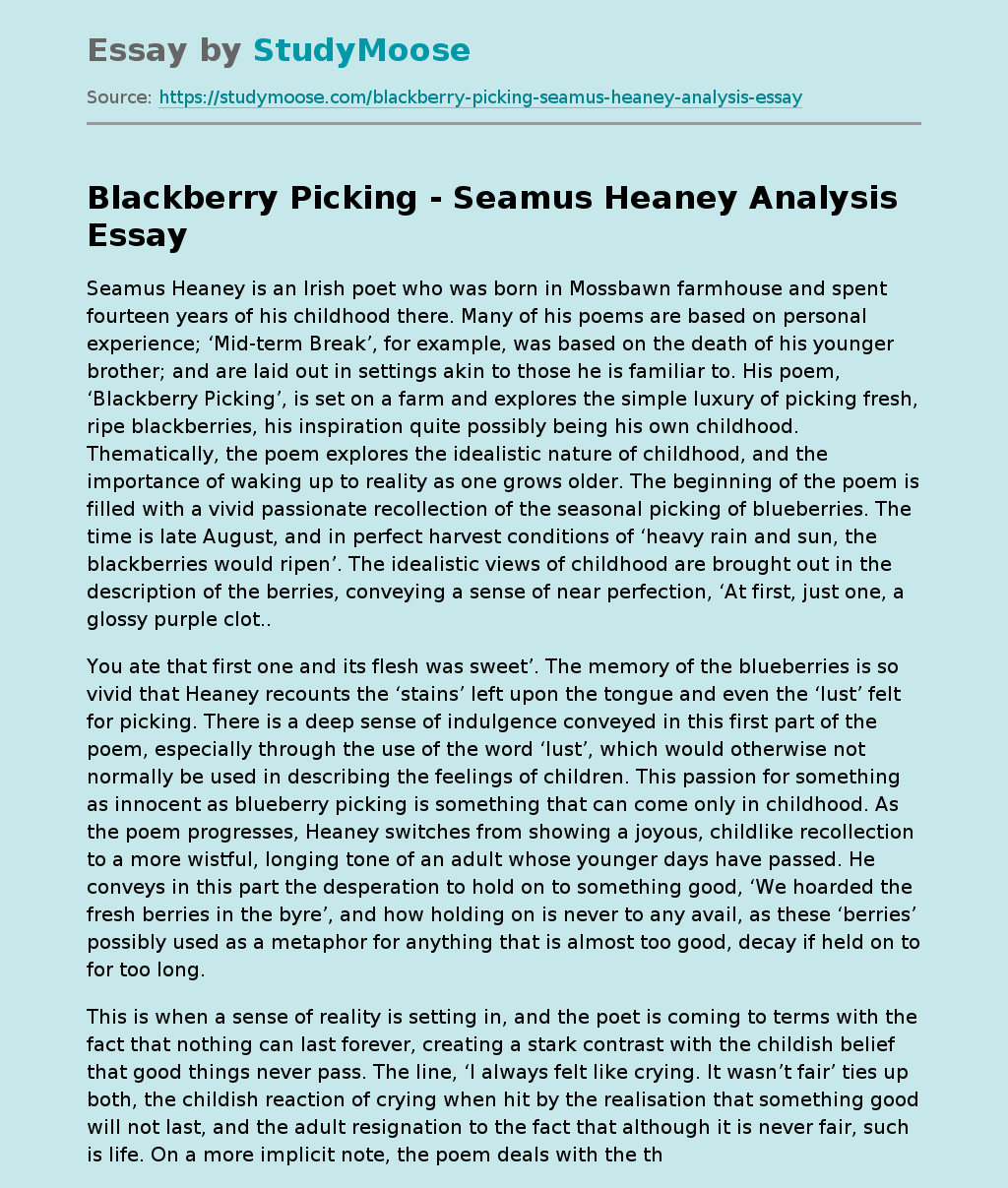