Black’s fight to end institutionalized racism in the United States has been an ongoing challenge for many years. In response to consistent violence against the Blacks, the Black Lives Matter movement called to action Blacks all over the world to streets to campaign against the Black injustice. Despite its controversial criticism, the movement became a widespread recognized platform that has has challenged and changed U.S. politics. The Black Lives Matter movement, demanded six policies in the attempt to repair the harms done to Blacks including End the war on black people, Reparations, Invest-Divest, Economic Justice, Community Control, and Political power.

This essay will only focus on the demanding ending the criminalization, incarceration and killing of blacks.

The long standing problem is that the police continue to criminalize and brutalize Black people. The changes that the Black Lives Movement aimed to change did not emerge from one, or three police brutality incidents, the increase of visible and constant criminalization and killings and the lack of reprimanding officers and other committing these act time over time, has led to the outraged of Black Americans.

In 2012, a teenage boy in Florida by the name of Trayvon Martin was fatally shot and killed by George Zimmerman, a local neighborhood watch. He was tried for murder and manslaughter. In 2013, Zimmerman was acquitted of all charges due to a lack of evidence to discredit his claim of having acted in a self defense. Enraged by this ruling, an African American female hashtaged “ Black Lives Matter” which circulated through the social media platform across nations.

It’s popularity and message moved from social media and to the streets. This marked the inception of the Black Lives Matter Movement. The Black Lives Matter movement was a foundation set on a series of protests and rallies that spurred demonstrations across the nation calling an end to police brutality and equality for blacks.

The movement continued to grow with the death of Michael Brown who was shot in Ferguson Missouri in 2014 and became a movement for numerous of victims who endured police brutality. Trayvon Martin and Michael Brown were both were black, unarmed, shot and killed. Believing in the same agenda, organizers around the world joined the Black Lives Matter mission. Beyond its start-up network, sixty other racial justice organizations joined the coalition. Black Lives Matter consisted of organizations such as Hands up don’t United, Organization for Black Struggle, and Black Youth project 100.

Criminalization and inequity of African Americans began as early as 1619. During this time, African Americans were kidnapped and brought to America to serve as slaves to maintain white lands and properties. African Americans including children were stripped off their identifies, beaten hanged by White owners. The other African Americansc though not slaves, however faced extreme prejudice laws that did not allow them to vote and own properties. Even though slavery came to an end and laws prohibiting discrimination against African Americans were passed, racism against this community continued through the years and remains prominent today in many ways. Motivated by the long history of blacks being the disadvantage community, Black Lives Matter movement, a comprehensive approach aimed to eliminate criminalization and improving the conditions that have crippled blacks through a political platform. It aimed to connect Blacks, so together they can build a world free of racism where blacks have the social, economic and political power to succeed. Black Lives Matter created a list demands and announced it publicly in 2016. The demands included a call for legal investigation of all black shootings, requested the government track the number of citizens killed by police, and demanded community accountability for those officers who go rogue, kill and are not reprimanded.

Black Lives Matter applied different tactics to spread awareness and ultimately end the war against blacks. Whether through online campaigning or direct actions in the streets, it has made people around the nation uncomfortable enough to speak and address the issue. Black Lives Matter became the controversial headlines in every media for quite some time. While many admire the courage and stand behind the movement, some fundamentally disagree with its tactics and approach. A critical opinion in the Washington post written by Barbara Reynolds, an activist in 1960s, claimed that the movement rejects the methods that worked for blacks in the past. She stated during 1960s, (under Martin Luther King leadership), and others who were involved were nonviolent activists whose approach conveyed ‘respectability and changed laws by delivering a message of love and unity.’ She went on to say despite wanting to get behind the movement the participant’s ‘conferential and devise tactics’ makes it difficult for her to support it. Further she stated, ‘In the 1960s activities confronted white mobs and police with dignity and decorum, sometimes dressing in church clothes and kneeling in prayer during protests to make distinction between who was evil and was good’. Reynolds argued that while ‘the civil rights movement valued all human lives, even those people who worked against us’ Black Lives focused too narrowly on ‘black pain and suffering’ and in order for Black Lives Matter to gain a wider appeal, ‘It must acknowledge the human in the lives of others.’

Critics used this phrase in an attempt to bring communities together claiming that “ Black Lives Matter is too narrow.” Another phrase trended phrase trended “ Blue Lives Matter” was raised in support of police officers after the shooting of two officers post the Ferguson killing. Other critics stated that the Black Loved Movement agenda is anti-white. Suppers if the movement claimed that the agenda is not anti-white but about acknowledging that the war is against Black people not White. The system that already is in favor of white lovesc they continue to be more valued, rested as if they are worthier of protections, safety, education and already have a good quality of life than the Black lives. Black Lives Matter movement stands for black lives matter too and not the assumption that other lives do not matter.

A San Diego University professor moved by the Black Lives Matters created a new doctoral course aimed to connect black men to the reality of being black in America. The course would draw various speakers to speak on how black men are devalued in classrooms. The new course drew many criticisms, according to a gun-rights advocated with the Sacramento-based Firearms Policy Coalition, a public university should not offer a course that permits speakers from the Black Lives Matter movement. He further, formed a coalition challenging the university to withdraw their approval of the course as it may organize teachers, school administrations and college professors to participate in the political movement. Stating ‘Black Lives Matter is a political movement, and even worse it’s a movement whose members have promoted segregation and violence against law enforcement.’

In 2017, Kendall Jenner, a public figure released a Pepsi ad that caused many controversies. Many people believe the ad (especially at the end of it) which depicted a Pepsi drink to end police brutality and bring blacks and officers together was a direct stab to Black Lives Matter movement. Further, the ad sparked claims that Pepsi adopted a racial protest movement to gain a sale. According to activist DeRay McKesson ‘This ad trivializes the urgency of the issues and it diminishes the seriousness and the gravity of why we got into the street in the first place.’ Other critics expressed that Black Lives Matter is further worsening police relations, encourages violence against police and it that it strikes similarities to the KKK supremacy groups.

Starting as a platform to protest injustice and to raise awareness to police brutality the movement expanded its stance. However critics of the Black Lives Matter movement have criticized the group for not having drawn up any concrete demands or solutions. The movement however has also broadened its causes including other lingering issues within the black communities in America. It address minimum wage and investigating police misconduct in black communities as well as decades of inequalities between blacks and whites on topics such as access to good education and to rates of prison incarceration. Blacks contribute their shortcomings or disadvantages in areas such as education and employment, housing and other areas to the criminalization they face. Statistically, Forty-two percent of black children are being educated in high poverty schools. Black High school dropout is 47% contributing to the unemployment rate. Despite making 13.2% of the U.S. population, blacks account for 37% of homeless people. In terms of voting, one in 13 African Americans of voting age are excluded due to a felony conviction charges. African Americans make up nearly 1 million (of almost the total of 2.3 million) jail population and are incarcerated nearly six times more than white individuals are. According to 2015 census data Blacks were victims of lethal use of force by police at nearly twice their general population rate. Further, this census estimation reported that of all Blacks killed by police a higher percentage of them were unarmed compared to Whites and Hispanics.

Despite all the criticism Black Lives Matter has received its recognition and has changed U.S. politics. black lives Matter was not formed in one day nor did it come from one incident but it has been a buildup to years of police and system abuse against blacks. Black lives Matter, a movement aimed to wars against blackes(from criminalization, to education) raised the conscious awareness and demanded the change that Blacks have been waiting to see. 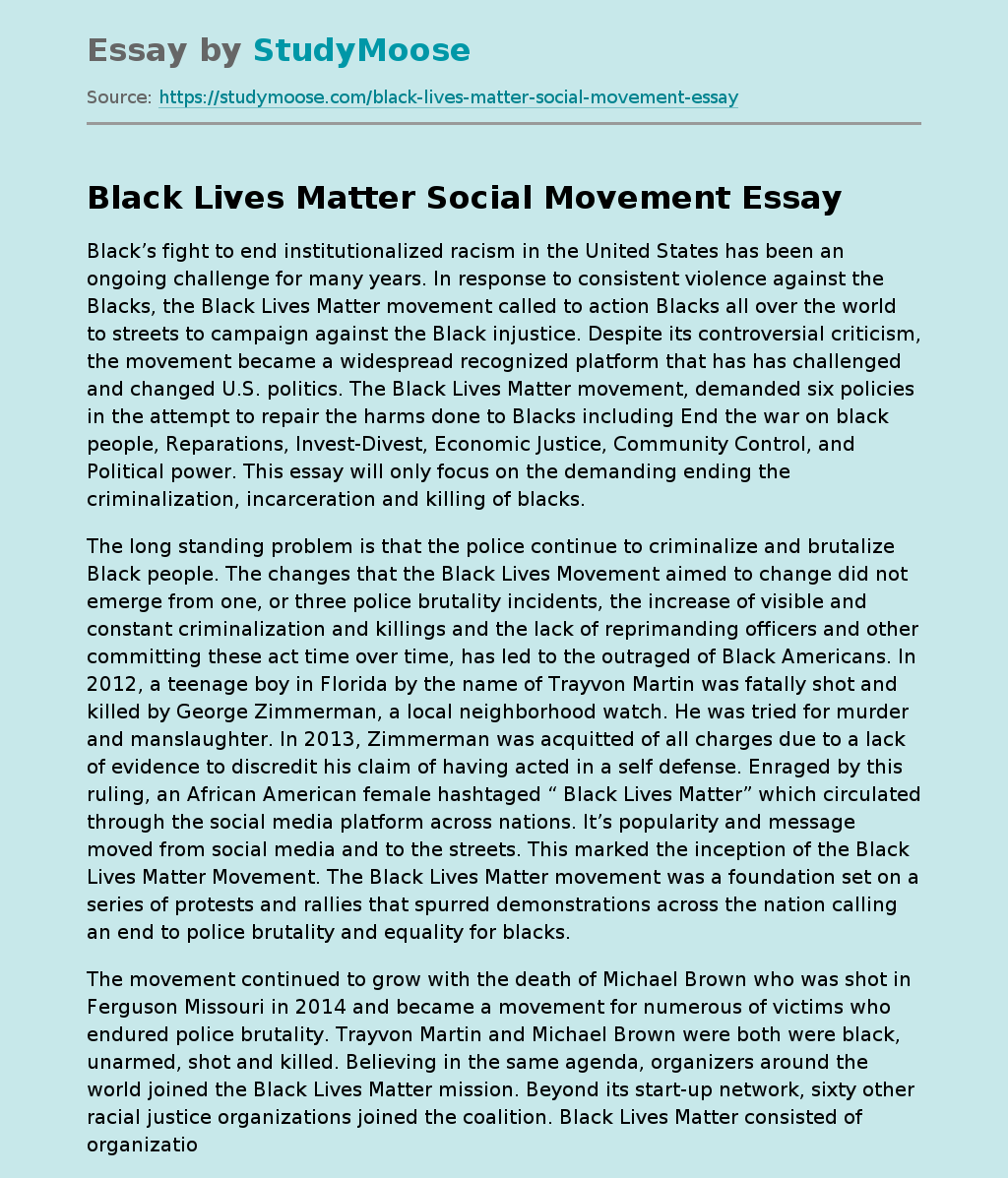