The Book “Black Dog of Fate” by Peter Balakian is a memoir by the Armenian genocide survivors’ descendants that lived in the United States of America and it was written in the suburbs of Tenafly, New Jersey, where the author grew up. The author tries to relate his personal history and happenings in his family to the general story of the Armenians. It is the story of a young man’s realization of his background and the huge massacres that occurred to the Armenians in Turkey.

Don't use plagiarized sources. Get your custom essay on
“ Black dog of fate ”
Get custom paper
NEW! smart matching with writer

It is the history of the killing of about one and half million Armenians by the Ottoman Turkish government in 1915 (Balakian, 1997). These series of killings is regarded as the twentieth century’s first genocide.

The name ‘Black dog of fate’ is about the parable that was narrated to the author by his grandmother ‘Nafina Aroosian’. In the parable, there were two offerings that were made to the goddess of fate. The first offering is a luscious lamb that had its body filled with almonds and pomegranates and its eyes sparkled with rubies, while the other offering is a dead black dog that had its mouth filled with wormy apple.

In a twist of fate, the lamb is rejected and the dead black dog is accepted by the goddess. As Nafina puts it to Peter that he should not be deceived by appearances and that the world is not what people think it is (Balakian, 1997).

Peter balakian was one of the members of the Balakian-Aroosian family and the oldest in his generation.

His family had secretly guarded the history of their past for so long. They guarded this secret as they had horrific memories of their past in their heads as they knew if they delved into their pasts the gory details of their traumatic experiences in the hands of their persecutors would haunt them. The memory of the brutal murder of lots of their relatives was not a topic that was suitable for discussion as they looked to erase the tragic event from their memories.

It narrates the ordeal of the Armenians in the hands of the Turks. The Armenians were subjected to various forms of inhumane conditions. Their ladies were raped and their men were butchered. The Armenians were gruesomely murdered in their thousands day after day and their carcasses were left to the vultures to feast upon. The Turks robbed them off their belongings and really impoverished them.

The book exposes the societal evils perpetrated by the Turks on the Armenians. The Turkish government tries to cover up these horrific crimes as they denied the existence of the genocide.

Balakian lets us into his family line as we are introduced to the matriarchs, a bishop, merchants, physicians, his aunts and two famous figures in the world of literature. The names of his renowned aunts are Anna and Nona Balakian, who distinguished themselves in the field of literature. His two other aunts are Gladys and Lucille, who were business women on Wall Street. But out of all these characters, the most important of them is his grandmother, one of the survivors of the genocide, whose experience was dreadful as she lost her husband to the genocide.

The book teaches us survival instincts in the midst of obstacles and it narrates a family’s sojourn from a horrific past into a better life and a new world. It represents the experience of an immigrant child in the United States of America while still retaining one’s cultural heritage. It tells us how the author’s relatives escaped the genocide and ended up in the United States of America.

One of the remarkable quotations in the novel that makes the novel a notable one as recognized by the New York Times Book review is simply quoted “In all of this germ madness there seemed to be some deeper, more pervasive anxiety being expressed. Some pathological fear that I sensed in my grandmother when she hovered over me, incessantly brushing her hand over my hair and asking me, How are you, what can I do for you, are you OK? Eench, eench, eench. [What, what, what] For my grandparents’ and parents’ generation, perhaps the world was a place conspiring to kill you. After the Genocide, the fear of death was different from the fear of mortality. In this atmosphere of deep anxiety, our family was far from the optimistic mood of suburbia. As my grandmother said to me as I lay on my bed recovering from the measles, ‘Sleep with one eye open; know the evil eye.'” (Balakian, 1997). Another powerful excerpt is in the latter page of the book and it is quoted as “Free speech does not guarantee the deniers the right to be treated as the other side of a legitimate debate when there is no other side.” (Balakian, 1997).

As the persecutions was against the Armenian Christians by the Turkish Muslims, the holocausts in the World War II era draws inspiration from it as it foreshadowed the mind-sets of the German army. The World War I killings of the millions of Armenians by the Ottoman Turks served as a justification to the holocausts of the World War II era. The holocaust was a period of mass murder of the Jews during the Second World War. During the holocausts, Hitler made several references to the serial killings of the Armenians as he justified their extermination. On the latter part of the book, Peter Balakian observes the mind-set of the German army towards the Armenians which foreshadows the pains they would later inflict on the European Jews in the Second World War (Balakian, 1997). As the Germans considered the Armenians as threats to the Turks so also were the Jews considered as threats to the establishment of the superiority of the Germans. 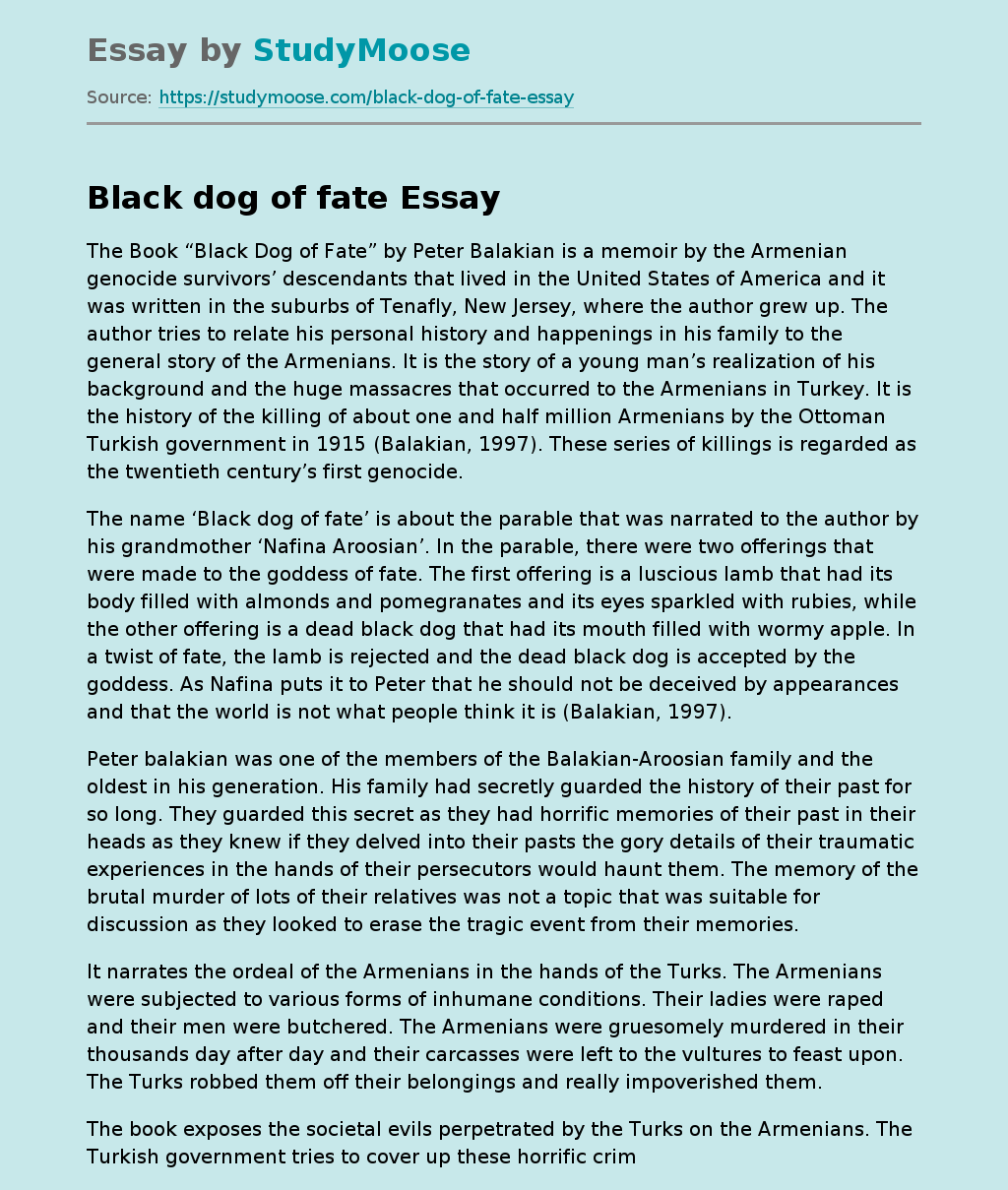